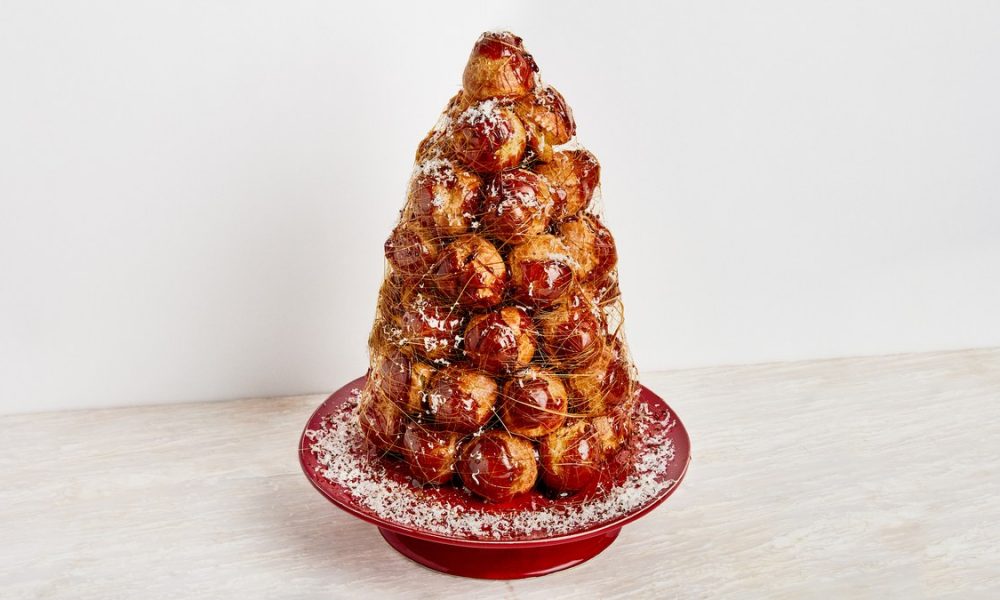 While everyone’s picking out their sequins and lamé and velvet jumpsuits to ring in the new year in rayon blends—we’ve been picking out a recipe that’s just as elaborate. Showy. Opulent for the sake of opulence. Part decor, part cocktail snack. Pairs well with champagne and resolutions. Something that catches the light and requires a fresh haircut of whisked caramel. That’s right. A Croquembouche. The French tower of cream puffs. But this time, we’re going savory.

Molly Baz, who’d just recreated a Martha Stewart recipe (for cookbook club) that used the croquembouche as a vase (!!), was up for the challenge. And a challenge it was. Not only did a testing round require making 40 pâte à choux, the filling, the caramel, and assembling the tower, but she’d also have to hear our critiques…and do the whole damn thing over and over again until it was perfect. The things we do for beauty!

What’s so savory about it? The choux—henceforth called “the puffs”—are cheesed up with Gruyere so now they’re gougères. The filling is Boursin-inspired: green and herby and creamy and cheesy (parm, ricotta, and cream cheese). The caramel gets offset with salt and black pepper, and the whole thing gets a snow-shower of more grated parm. When an unsuspecting Amiel Stanek tried a bite and assumed it would be sweet, his entire face lit up: “I’m flavor tripping right now!” he exclaimed. The garlicky chive filling, the sharp cheesy dough, there are no flavors hiding in the background here. The only drink we can fathom to go with it is something cold and bubbly. You know the stuff.

The puffs are easy (make them the same size tho), the filling’s a food processor cinch and then squeezed into each puff with a pastry bag, and the caramel’s fine if you keep an eye on it to keep it from burning. With tongs, or your hands if you like to feel pain, each puff is dipped in caramel for the side that faces the world. It quickly hardens and shines like polished mahogany. The most difficult part is building a symmetrical tree that’s artfully rustic, not droopy, leany, or otherwise…lumpy. After watching Molly assemble it in person, standing there doing nothing—I’m a great and supportive sous!—I took a lot of notes to make it easier on the rest of us without food styling on our resume. Here’s how to assemble a croquembouche like a pro:

You can use a fork to make the final wisps of caramel circling the tower, but Molly made a custom tool: a whisk with an open end, which she made by cutting the tines with a wire cutter. It looked like one of those as-seen-on TV head massagers. It allowed her to get thin strands and plenty of them.

What makes the whole project easier is making the puffs and the filling ahead, but the assembly needs to happen right before serving. They’re better that way. As it sits, the filling warms, the caramel hardens to cement, and that’s sad. Eat it within the hour, maybe two, which come on—shouldn’t be that hard.

Let’s start from the beginning: Croquembouche is a tower of cream puffs, classically filled with a sweet pastry cream, each one dipped in caramel, with thin caramel strands enrobing the edible monument. Fancy, classy, dessert-y. We love the drama but wanted to take it to the savory side, so our version is constructed with cheesy gougères and an herbed cheese filling, and the caramel is spiked black pepper. It’s the showstopping holiday appetizer you didn’t know you needed.