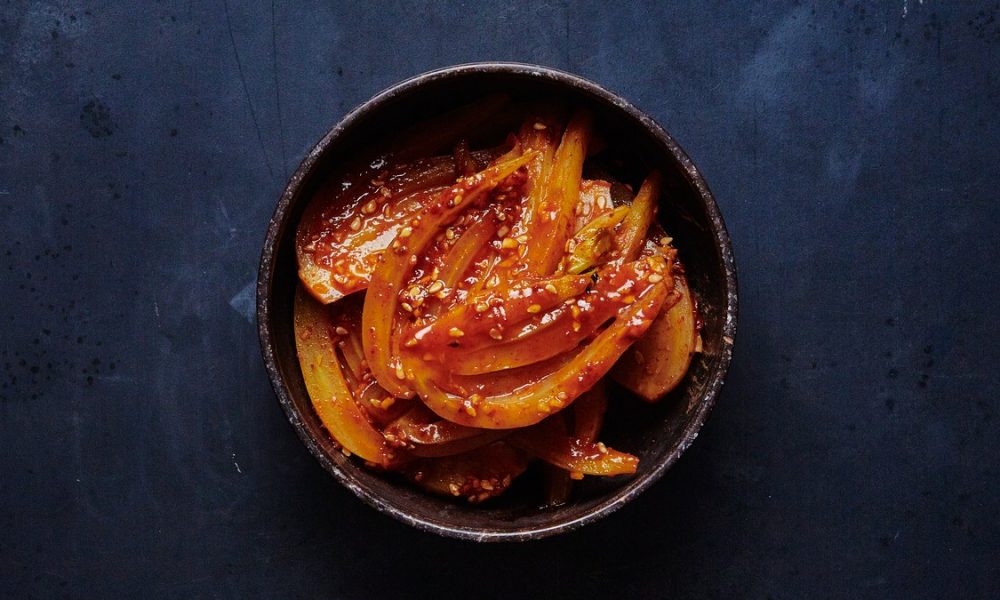 Fennel gets a whole new look when quickly blanched then dressed in a spicy-sweet gochujang sauce. Serve this simple Korean banchan alongside rice and a main dish like Red Wine and Soy–Braised Short Ribs or Kimchi Jjigae to make it a meal. The dressing would also be crazy delicious on virtually any vegetable—cooked or raw. 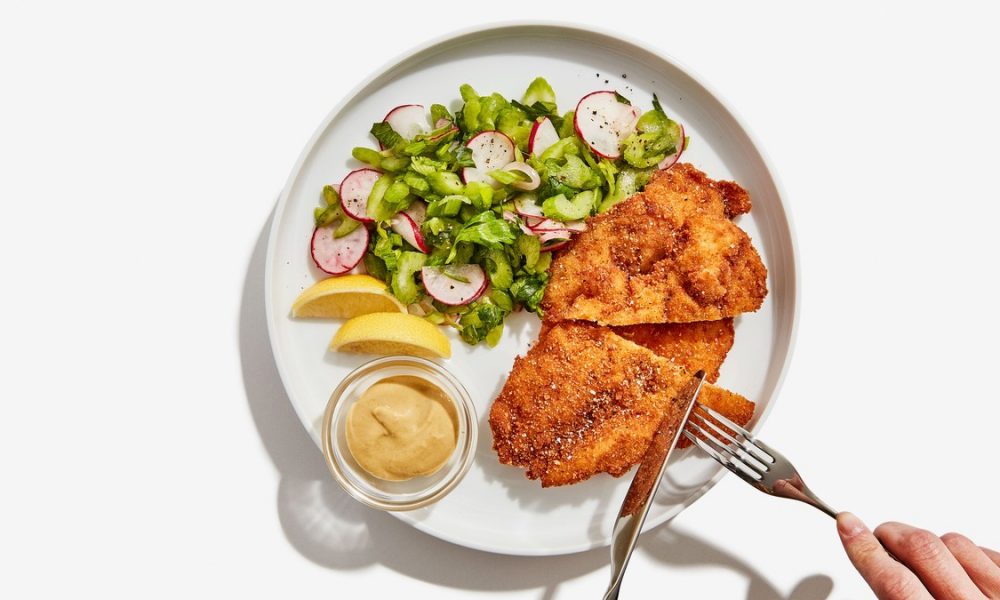 Meanwhile, pour neutral oil into a large Dutch oven to a depth of about 1″ (4–6 cups oil) and heat over medium-high. If you have a deep fry thermometer (also known as a candy thermometer), clip it on to the side of the pot and keep an eye on it; if not, use an instant-read thermometer to check the oil temperature every few minutes. You want it right around 350° (this will take about 10 minutes total). As it surpasses the 300° mark, reduce heat to low so you get to your target temperature gradually. Maintaining the oil temperature requires some finesse, but it gets easier with practice! It’s always okay to stop, adjust the heat, and wait for it to get to where you want it. 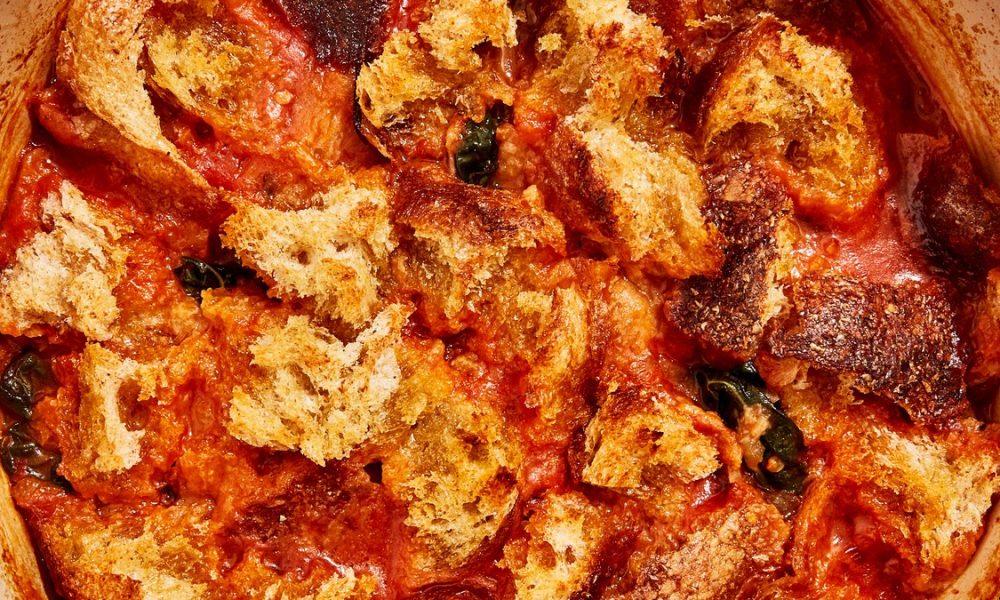 I think we can all agree that, more often than not, a bowl of soup, a hearty stew, or a saucy braise is only improved by the addition of bread. Sometimes that’s a hunk of freshly baked baguette. Other times a buttery dinner roll. Bread is the staff of life, as they say.

But lately it feels like that phrase should be amended to “fried bread is the staff of life.” Everywhere I look somebody (myself included) is frying a thick slice of sourdough bread in a slick of olive oil until crunchy and golden brown on one side, soft and doughy on the other, and serving it alongside any saucy concoction worthy of soaking. If you’re not one of those people, I urge you to become one. Immediately. Fried bread for life.

But, as I recently discovered, fried bread is not necessarily the end-all, be-all of carb-on-soup situations. One day recently, while working on a Basically recipe for ribollita—a thicccc Tuscan vegetable, bean, and bread stew—it occurred to me that there may in fact be a future beyond fried bread. Don’t get me wrong: I love the stuff. But perhaps the lone slice of fried bread, riding shotgun in most cases, could take center stage. An exploration seemed in order, and that already-bready ribollita seemed like the perfect place to start.

Traditionally, Ribollita is made thick and hearty by cooking leftover stale bread directly into a broth-y combination of stewed tomatoes, beans, and other veggies. The bread falls apart and enriches the soup, adding stick-to-your-bones body to the final dish. I like that idea—bread as stew thickening agent. But I was missing the crispity-crunchity quality that fried bread lends, and I didn’t see any reason why I should have to choose one or the other.

Thus, the concept of torn-croutons-baked-directly-into-the-top-of-a-soup was born. Once my glorious, soggy bread-enriched ribollita was almost finished, I covered the entire surface of the stew with irregularly-shaped hunks of crusty sourdough bread and drizzled the whole thing with pleeeeenty of good olive oil. Then I popped the whole Dutch oven into a 450° oven until the the stew is thick and burbling, the tops of those craggy croutons were deeply golden and crisp, and the undersides are soaked in thick tomato-y deliciousness. It’s the best of both worlds—super-crunchy and soggy-rich at the same time—and you don’t even need to dirty another skillet or sheet pan to make it happen. Now that’s living!

Even better? This same technique can be applied to literally anything stewy and thick enough to support the bread. Beef stew. Creamy tomato soup. Minestrone. Lentil soup. Split pea. The crout’-on-soup possibilities are truly endless.

So go on: Crack into that crust like it’s a savory crème brûlée, and tell me you’d rather eat regular ol’ fried bread on the side.

Go forth and bake croutons right the hell into your soup: 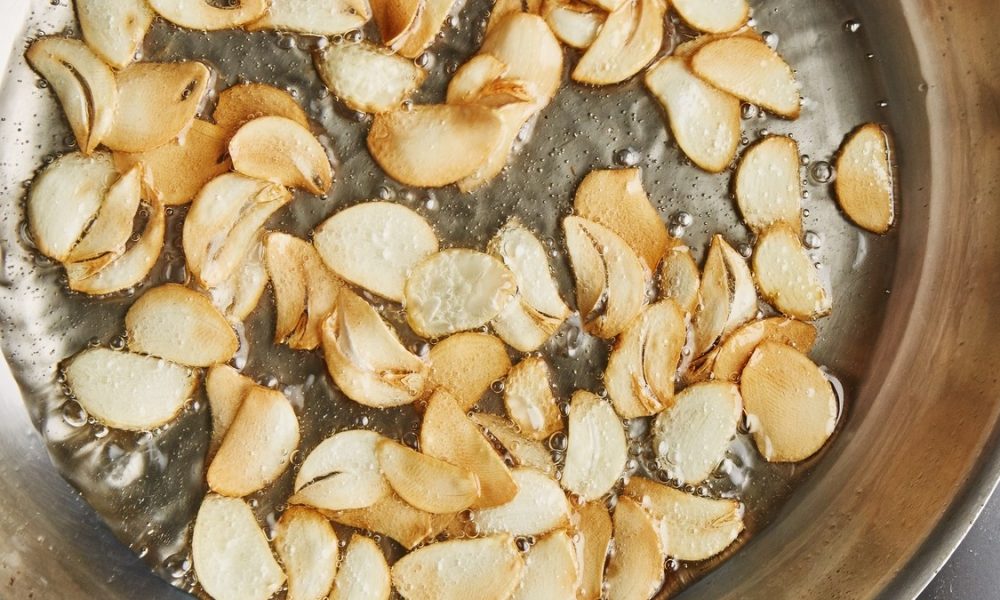 If you eat salad for the croutons and tomato soup for the grilled cheese, you should be making garlic chips… to put on everything. These thin-sliced pieces of heaven crisp up in minutes and add a nutty, garlicky crunch factor to rice, stews, salads, and really anything at all.

Making them is incredibly easy, if you have a mandoline. (And if you don’t—get one. We like the Benriner Japanese mandoline.) It’ll slice the cloves more evenly and thinly than your chef’s knife—just watch your fingers! Keep in mind too that this is not the time to use your favorite olive oil. We use a neutral oil like vegetable or grapeseed because, 1) you want the favor of the garlic to shine through, and 2) you want the garlic chips to be versatile—olive oil may be great for topping aglio e olio, but it doesn’t complement soy sauce and sesame oil as well.

Crispy garlic chips happen pretty fast, so keep your eye on the prize. You start the garlic in cold oil so it comes to temperature evenly, and you’ll know the chips are done when the oil stops bubbling around the edges and they turn slightly golden. Be conservative here and pull them out as soon as they hits a light golden-brown. It will take time to fish out each sliver with a slotted spoon, so work fast and in batches. Nothing tastes sadder than bitter burnt garlic.

Once you drain them on a paper towel, they are a nice little sweet, slightly nutty, and garlicky topper. They are best still warm and scattered atop the aforementioned fried rice, ricotta toast, seared steak or short ribs, weeknight pantry pasta, etcetera, etcetera, etcetera. They can be kept in an airtight container for a few days, so grab a few extra garlic heads and make a double batch. And while you’re at it, maybe consider investing in an extra tin or two of mints?