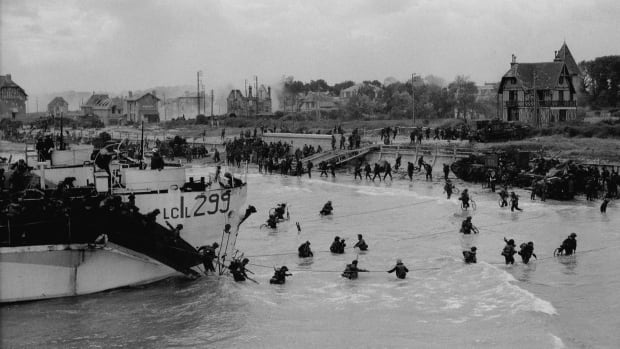 The Royal Canadian Mint is creating two commemorative coins to mark the 75th anniversary of D-Day.

The Liberal cabinet approved the design of the new toonies, one of which will have multiple colours instead of the usual two-toned coin, to commemorate a key turning point in the Second World War.

On June 6, 1944 a combined force of about 150,000 Allied troops, made up of largely of Canadian, American and British soldiers, stormed the beaches on France’s Normandy coast, coming up against Nazi troops in concrete fortified gun positions.

About 14,000 Canadians were involved in the assault, known as Operation Overlord. Canada also contributed some 110 ships and 15 fighter and bomber squadrons.

On D-Day, 359 Canadians died as they ran from boats onto Juno Beach and more than 1,000 were injured.

The invasion marked the start of months of fighting to free France from Nazi occupation and would eventually lead to victory in Europe.

The Mint regularly creates commemorative coins to mark these kinds of anniversaries, having done so earlier this year with three million limited-edition toonies to mark the 100th anniversary of the armistice that ended the First World War in 1918.

And in 2014, for the 70th anniversary of D-Day, the Mint created a commemorative silver coin depicting soldiers in full battle gear disembarking a landing craft towards Juno Beach. But the Mint only created 8,400 of the coins, for collectors. The new toonies are to be « circulation » coins, used as regular money.

Alex Reeves, a spokesman for the Mint, said the Crown corporation couldn’t discuss the new coins because it doesn’t disclose information beyond what is published in official notices prior to the launch of a new commemorative coin.

The government order says the D-Day toonies will have an image of four soldiers and one sailor, all wearing helmets and one holding a rifle, in a landing craft at Juno Beach.

The helmet of the middle soldier will be olive green on the coloured toonie.

There will also be renderings of a Canadian destroyer, barrage balloon and Spitfire fighter planes.

A Canadian Army Newsreel depicts the D-Day lead-up, the landing and the march for Paris in 1944. 6:30

Separately, the Liberals have also approved a commemorative loonie to mark the 50th anniversary of Parliament’s decriminalizing homosexual acts.

Up until 1969, sexual acts between consenting same-sex adults were deemed crimes in Canada and punishable by jail time.

The loonie to be created by the Mint will have two faces overlapping to create one face, with a small hoop earring on the left ear, surrounded by wavy and curved lines, the official posting says.

The words « Equality » and the French « Egalite » will be inscribed on the coin along with the year.

The CBC Television program Horizon looks back 20 years after the Allied invasion of Normandy. 56:12 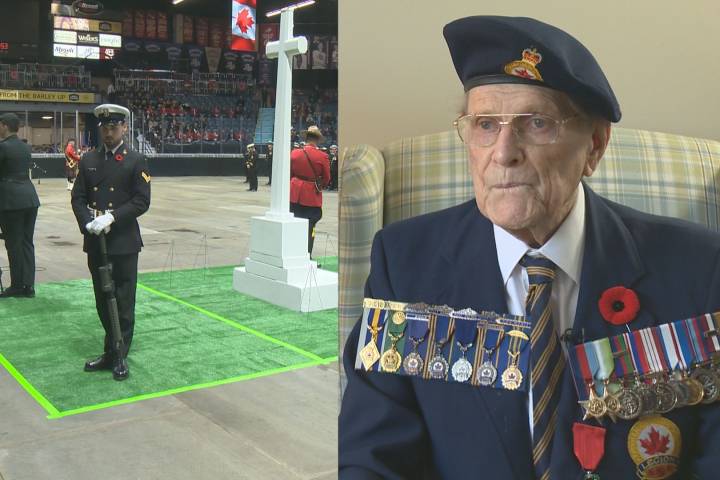 Regina paused to reflect this Remembrance day, marking the armistice of November 11, 1918 that ended the fighting of the First World War.

For veteran Harold Hague, his memories of the First World War are ones passed down by his father.

“He was in the Royal Horse Artillery in France and he suffered pretty bad,” Hague said. “The horses took the big guns into the battle and it was so cold he said they had to huddle up and sleep under the horse to keep warm at night. Those are stories that will shake you.”

Born in Earl Grey, Saskatchewan, Hague signed up for active service in the Royal Canadian Navy when he was 19, at the beginning of the Second World War in 1939.

“It was the thing to do. There was a certain amount of patriotism and stuff like that, ” Hague said. “My father didn’t want me to join, but whoever listened to their father at that age?”

After enlisting, Hague served on the high seas and was active during the Battle of the Atlantic and on D-Day.

“But finally we had a ship that had the equipment and the guns to do the job and the aircraft, the Canadian Air Force, they had new aircraft that could go further and that was the turning point in the war, was getting the material in to England.”

On June 6, 1944 Hague was one of nearly 150,000 Allied troops who landed on the beaches of Normandy, France to fight the German occupation. During the invasion, he was on a ship clearing enemy mines.

“When I was on the ship and we were pulling in some of the survivors, trying to save them, you could hear them screaming and they knew they got hit,” Hague said.

“They were screaming for mama.”

Now 98, the memories of war still linger like it was yesterday.

“It’s something I’ll never forget,” Hague said. “I was up on the bridge and I looked out from the shore to the sea and as far as I could see behind us was ships, hundreds of ships. It was a sight and as they come in it got worse and worse.

“And the aircraft, thousands of aircraft flying all at once and paratroopers,” Hague added, “it was just hell.”

When the war ended, Hague returned to Regina, where he was instrumental in the evolution of Regina’s downtown during the late ’70s and early ’80s.

He also joined the Royal Canadian Legion Branch 001, and through his leadership, he served various roles over the years and was directly involved in the establishment of services to veterans and seniors.

Moreover, he served as the co-chair of the Regina Remembrance Day Service and assisted in arranging the indoor service at the Brandt Centre, Saskatchewan’s largest Remembrance Day event.

This year, more than 1,000 people came out to pay their respects, honouring those who sacrificed their lives for our freedom.

“Remembrance isn’t a job, it’s a privilege,” said Lt.-Cmdr. James Balfour, senior naval reserve chaplain. “It’s important we take note of those occasions when we can remember the sacrifice of previous generations.”

Due to health reasons, this is the first year Hague isn’t attending the ceremony. Instead, he’ll watch from the comforts of home as the next generation continues to carry the torch.