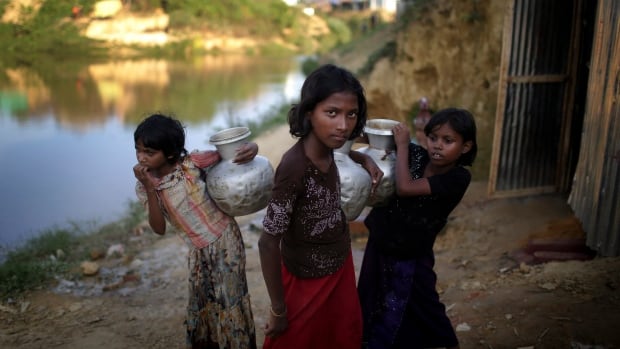 A Canadian-led international movement seized with stanching the flow of refugees wants to use an untapped source of cash to address the global crisis: the billions languishing in the frozen bank accounts of dictators and despots.

The proposal will be one of the main recommendations of the World Refugee Council, a self-appointed body of two dozen global political figures, academics and civil-society representatives led by former Canadian foreign minister Lloyd Axworthy.

« We’ve put forward a proposition that where there are frozen assets they should be unfrozen through a proper legal process and reallocated to help the victims of the crime and corruption and instability that the bad guys create, » said Axworthy. « It’s a morality play. The bad guys have to pay to help their victims. »

The World Bank estimates the pool of cash to be worth $10 billion to $20 billion per year, Axworthy said in an interview.

The council was established last year by a Canadian think-tank, the Centre for International Governance Innovation, to find new ways to deal with the 21st century’s record-setting migration crisis — the 68.5 million displaced people driven from their homes by war, famine and disaster.

The United Nations will turn its attention to solving the problem at a special session later this fall, and the council plans to offer its input, using the weight of the last Canadian foreign minister to chair a Security Council meeting.

The UN has acknowledged in stark terms that as the number of homeless and stateless people continues to grow around the globe, their suffering is increased by the shrinking pool of money available to help them.

‘Proceeds put for the public good’

Axworthy says there are fundamental structural flaws in how the world’s institutions are set up to cope with the unprecedented forced migration of people, and a big one is how the bills are paid. The system is based on charity — the benevolent donations of people, countries and businesses — and is not sustainable, Axworthy said.

An October report by the United Nations refugee agency said it expected to raise 55 per cent of the $8 billion it needs to support refugees and internally displaced people this year.

Axworthy said the courts in several countries can be used to seize funds that have been frozen there. Canada, the United States and Britain have all passed legislation allowing them to impose sanctions on individual human-rights abusers. These « Magnitsky laws » are named after a Russian tax accountant who died in prison after exposing a massive fraud by state officials there. 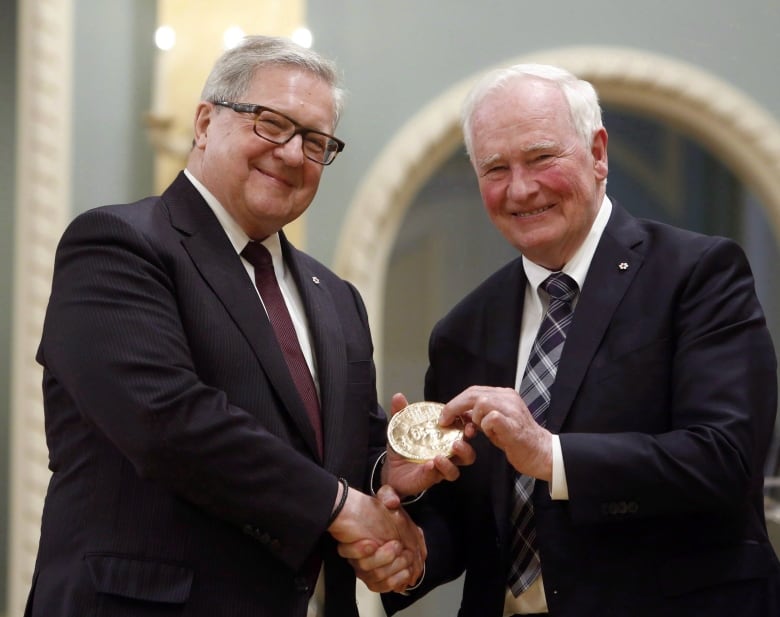 Lloyd Axworthy, left, is presented with the 30th Pearson Peace Medal by Gov. Gen. David Johnston during a ceremony at Rideau Hall in Ottawa in May 2017. (Fred Chartrand/Canadian Press)

The world could start spending the « tens of billions of dollars moulding away in a variety of banks and other places, purloined money from the warlords, from the bad guys, the dictators, the authoritarians, » Axworthy said.

Irwin Cotler, a former Liberal justice minister and human-rights lawyer who has championed Magnitsky-style legislation, said in a separate interview that these laws can allow to go beyond freezing funds, because once the assets are seized, there’s no point to returning them to their corrupt owners.

« What you want to do is have the proceeds put for the public good, » said Cotler, the founder of the Montreal-based Raoul Wallenberg Centre for Human Rights.

Canada’s first round of sanctions under its Magnitsky Act targeted people in Russia, South Sudan and Venezuela, including Nicolas Maduro, the South American country’s president.

The refugee council’s most recent report, released last month, focused on the displacement of millions of people from Venezuela. That report urged the United States to take a leading role in seizing billions of « ill-gotten » assets in the country, including the $2 billion that the U.S. Treasury Department estimates has been stolen from Venezuela’s state-owned oil company.

Fen Hampson, who co-wrote the report and is head of the global security program at the Centre for International Governance Innovation, suggested governments need to go beyond their various Magnitsky laws to repurpose the seized assets of « Maduro and some of his henchmen … to help victims and the host countries that are reeling under this growing refugee and migration crisis. »

The Magnitsky Act, named after a Russian lawyer and auditor who was arrested on trumped-up charges and died in prison, has Russia threatening retaliation against Canada. The proposed law targets those responsible for human rights abuses and corruption. 2:15

The report said there is legal precedent to do this: a civil case against the son of the dictatorial leader of Equatorial Guinea resulted in a $30-million judgement, $20 million of which was later used by a charity to help the country’s people.

In Yemen, where most of the inhabitants of the port city of Hodeida were forced to flee Friday as Saudi Arabia’s three-year war on Shiite rebels continued, the UN World Food Program’s country director said a massive cash influx is needed to repair the battered economy and feed a population on the verge of starvation.

Stephen Anderson said it’s up to others, higher up in the UN, to decide whether that money should be siphoned from a warlord’s frozen bank account.

« We’re 100-per-cent voluntary funded, » Anderson said. « The economic issues need to be addressed urgently because that’s affecting the entire population of Yemen. They were the poorest in the Middle East before the conflict so there’s no safety net. »