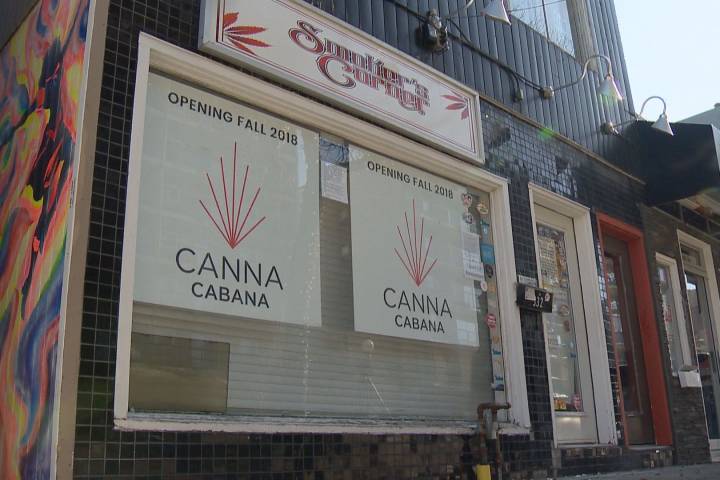 Marijuana legalization is days away, but Calgarians with high expectations around retail options might need to chill out.

Alberta Liquor, Gaming and Cannabis has given permission to 17 pot shops in the province to open their doors on Oct. 17; Calgary has two.

“There are still some additional requirements that these stores must fulfill before they will obtain their full licence for the retail of cannabis,” AGLC cannabis inspections senior manager Tom Siewert said. “So we’re working with each one of those interim licensees.”

In Calgary, pot shop locations and business licences are awarded by the city, but the final approval to sell as well as the physical marijuana product comes from the province.

Now, more than 100 city-approved pot shops in Calgary are patiently waiting for that final step.

Canna Cabana, formerly known as Smokers’ Corner, hopes to be up and running in a few weeks.

“We wanted to be open the 17, that was the goal,” Canna Cabana co-owner Lucas Klapper said. “Its a historic day for Canada and we wanted to be a part of that.”

Canna Cabana has approval from the city to open a store on 10 Street N.W., and the team was full steam ahead to be ready for an Oct. 17 opening, however, construction slowed and the inside of the shop is unfinished.

“A couple weeks ago… we were told that things are not lining up and a lot has to be done still in terms of inspections,” Klapper, said. “There’s a due diligence process [with] the AGLC that we still have to get done.”

According to the City of Calgary, of over 290 reviewed applications, 118 shops have been approved.

The AGLC said timing is behind the lack of provincially approved stores in Calgary. In comparison, Edmonton has six and Medicine Hat has three stores that will be selling on legalization day.

“A lot of it is up to the applicant themselves, and how quickly they construct and if what they have constructed for their premises meets our requirements,” Siewart said.

Those requirements include a due diligence review, physical inspections throughout construction and renovation as well as a final inspection when everything is finished.

Canna Cabana has more time to finish renovations and construction without rushing the Oct. 17 deadline, but the owners worry that may cost them.

“The disadvantage, obviously, is losing money, revenue, potential customers, potential revenue,” Klapper said. “We wanted to be open, we did, but it is what it is.”

“I believe the market is large enough that stores in different areas will have the same opportunity as the stores that are ready for the 17,” Siewart said.

The AGLC says inspections are ongoing and officials are working to get approved stores up and running as soon as possible. The AGLC has 64 inspectors visiting shops across the province.

It’s expected there will be more pot shops opening their doors later this month.

As for Canna Cabana, they’re hoping they’ll be able to open their doors in late-October or early-November.

“We’re going to be late, but better late than never,” Klapper said.