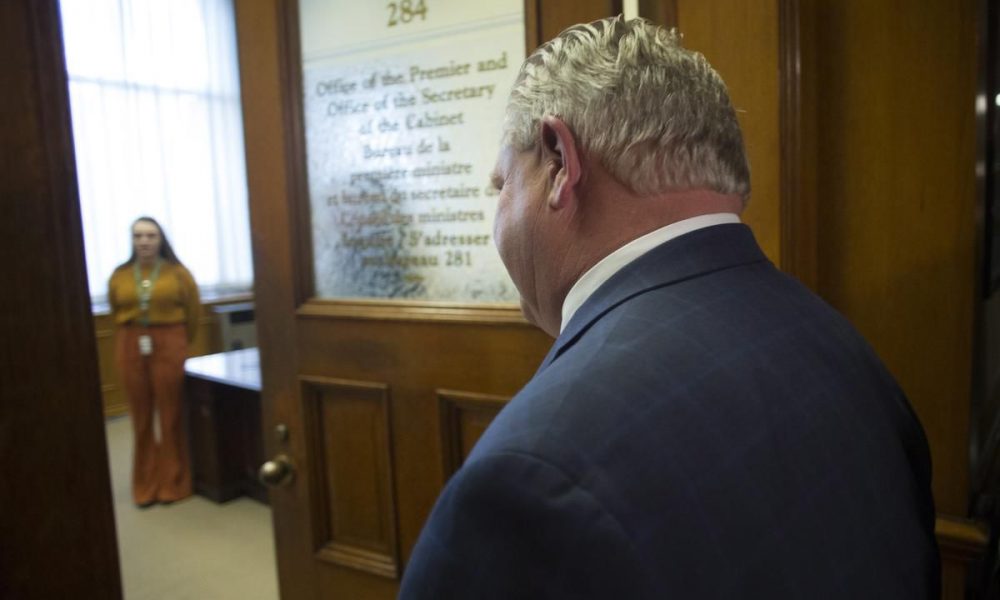 The beauty of democracy is that you get to vote the bums out.

But what if the next group of bums clings to the seat of power — rewriting the rules to undermine campaign finance reforms, handicap their opponents and advantage themselves ahead of the next election? And the one after that?

Follow the money. Keep an eye on the hypocrisy.

In opposition, Ontario’s Tories made their name by sullying the Liberal brand. They accused the last government of playing money politics through bribery, corruption and “cash for access.”

But from their new perch in power, the Progressive Conservatives are turning back the clock on hard-won democratic reforms that keep politicians accountable.

Buried in the government’s fall economic statement is disturbing new wording that would reopen the door to big money from big business (and big labour), while hobbling competing parties. It is sneaky, it is duplicitous, it is anti-democratic.

For decades, all three major parties profited from Ontario’s wild west of money politics. Under sustained media pressure (not least from the Toronto Star), the Liberals belatedly cried uncle in 2016.

Then-premier Kathleen Wynne banned the outsized donations that distorted decision-making by the government of the day, no matter which party was in power. Individuals had to attest in writing that they were not sneaking in “funds that do not actually belong to the person; or any funds that have been given … by a corporation or trade union for the purpose of making a contribution.”

Now, the new Progressive Conservative government is deliberately diluting those protections. As first reported by my Star colleague Robert Benzie, the latest language would remove the obligation of individual donors to certify that they are not being bankrolled by corporations or unions behind the scenes.

It is a retrograde development, part of a package of changes will diminish democratic protections in Ontario.

Make no mistake, powerful corporate interests funnel money to buy favours from politicians in power, or to curry favour with politicians poised to attain power.

Remember when Doug Ford, campaigning to become premier, promised a group of donors that he would slice and dice the Greenbelt to clear the way for commercial development? Only when a video clip of his jaw-dropping comments circulated online did an embarrassed Ford foreswear such action.

That’s how the game is played by all parties. A series of columns in 2016 revealed that senior Liberal cabinet ministers were assigned fundraising quotas — often in the hundreds of thousands of dollars — that could only be achieved by prostrating and prostituting themselves at the expense of the public interest.

Shamelessly, the Tories are now cancelling the requirement that donors certify they are using only their own money, on the dubious grounds that it is too bureaucratic. That’s like saying you shouldn’t go to the trouble of signing an attestation on your tax returns, because everyone already knows it’s illegal to cheat.

Insidiously, the Ford government is also bringing back the notorious cash-for-access event, where the premier and his most bankable cabinet ministers will once again headline their own fundraisers for lobbyists and corporate power brokers, who get to hobnob for a high price.

Disturbingly, the Tories will also eliminate (by 2022) one of the pillars of campaign finance reforms — the per-vote allocation that goes to all parties surpassing a 5 per cent benchmark. The $2.71 per-vote payment is a recognition that weaning modern political parties off big money calls for compensation in the form of secure public funding, rather than throwing them off balance and depriving voters of a diversified choice.

Based on their latest electoral performance, the PCs receive $6.3 million a year, the NDP $5.2 million, the Liberals $3 million, and the Greens $700,000. Under previous leader Patrick Brown, the Progressive Conservative caucus endorsed the so-called per-vote subsidy as a reasonable quid pro quo.

But Ford, flush with fundraising cash from his populist base, sees an opportunity to undercut the just-defeated, deeply indebted Liberals before they are fully recovered, while gaining an advantage over the NDP. Finance Minister Vic Fedeli, who backed Brown’s position in the past, has now fallen into line with Ford’s antipathy to the formula, saying that political parties “shouldn’t be a burden on the taxpayer.”

Implicit in that sloganeering is the proposition that parties should end up beholden to big donors. And that campaign reforms undertaken in good faith should be whittled down at the whim of the premier in power, at the expense of the parties in opposition.

Fedeli’s new legislation is cynically called the Restoring Trust, Transparency and Accountability Act. In truth, it is eroding all of the above — making it that much harder to follow the money, but easier to see the hypocrisy.

There was a time when the Tories cast themselves as reformers in the defence of democracy. Now, they are disrupters in the service of donors.