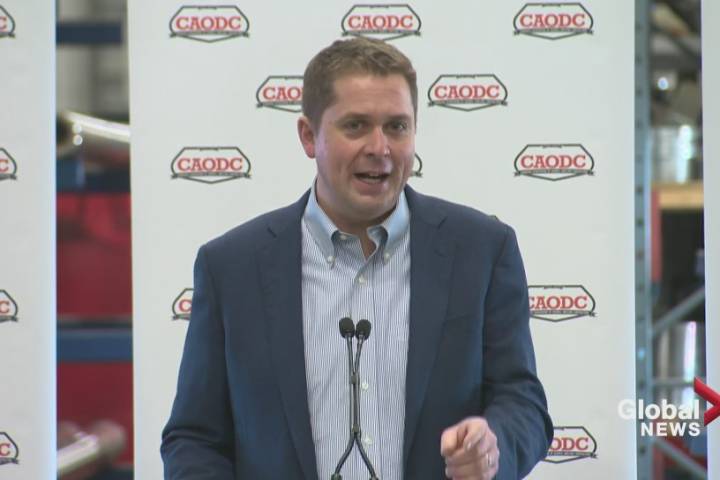 Scheer is lashing out at Trudeau and the Liberal party for dismissing anyone who disagrees with them, particularly anyone who has questions about Canada’s immigration system.

“I actually think Justin Trudeau’s approach to label people who have legitimate concerns with his issues as being un-Canadian and intolerant, that is very dangerous,” said Scheer.

His comments come several days after Trudeau told The Canadian Press that Scheer and the Conservatives were playing a dangerous game themselves by lying to Canadians to drum up fear over immigration.

Both leaders are issuing similar accusations at the same time as they are promising to run positive, upbeat campaigns for the 2019 election.

Following their 2015 election loss the Conservatives acknowledged they had taken on a more negative tone and pledged to brighten up by the next campaign. In an interview in front of a roaring fire in the living room of his official residence in Ottawa, Scheer said he is confident the party has learned from that mistake.

If any of his MPs resort to name-calling — Calgary MP Michelle Rempel earlier this week called Immigration Minister Ahmed Hussen a “chicken” on Twitter, for example — Scheer insists it is in reaction to the Liberals and doesn’t apologize for it.

Also, you don’t show up to debate me. You had your cronies vote down a motion to appear before our committee to get grilled on immigration levels. Every time you appear to “debate”, you are condescending and smug your defence of the indefensible. Bring it, but you won’t. Chicken. https://t.co/oI5iCg4bU3

“When we’re the victims of insulting language and attacks it’s obviously going to evoke a response,” he said.

But he said the general message the Conservatives will put to Canadians “will have a positive aspirational aspect to it.”

It is on Trudeau’s watch, Scheer said, that the country is facing regional divisions and jurisdictional battles over oil pipelines. And it is on Trudeau’s watch, he went on, that what the Conservatives call “illegal border crossers” have become a major problem, Over 38,000 irregular migrants who originate from places like Haiti, Somalia and El Salvador have arrived in Canada since the beginning of 2017.

Scheer said he and his party are not anti-immigration, they are anti-cheaters.

“The Conservative party believes Canada is stronger for being able to welcome people from all over the world. We are proud of being in a country that has the ability to welcome people who are facing persecution and fleeing civil war and genocide. But in order to be able to continue to have that type of a system we have to maintain the confidence of Canadians in it. We have to make sure people come to Canada the right way,” he said.

A spokeswoman for Trudeau said he is not going to shy away from pointing out inaccuracies or falsehoods in Conservative messages.

“Canadians clearly rejected Stephen Harper’s divisive approach in the last election, which is the same approach the Conservatives are relying on now,” said Eleanore Catenaro. “Whether it is spreading falsehoods about immigration, ignoring the science behind climate change, or engaging in personal attacks, Mr. Scheer and the Conservatives are continuing to play up people’s fears and anxieties for short-term political gain.”

Scheer’s stance against the recent United Nations Global Compact for Safe, Orderly and Regular Migration was one of the things that provoked anger in Trudeau. Trudeau said the Conservatives are flat-out lying when they say the agreement overrides Canada’s sovereignty to make decisions about its immigration system or will force media to take specific positions on immigration.

Several immigration lawyers and experts say the compact is not binding and mainly is an attempt to help the world bring order and consistency to the growing numbers of migrants fleeing war, persecution, famine or extreme weather.

Scheer said when Trudeau and other Liberals dismiss any concerns with the compact out of hand, or try to tie people who challenge it to extremist groups because they have similar opinions on that subject, he is insulting not just the Conservatives but hundreds of thousands of Canadians who have the same questions.

“People who have those legitimate concerns deserve to be spoken to with respect and have their concerns taken into account, not brushed aside with insulting labels,” Scheer said. “That’s I think a very dangerous thing to do. “It really evokes a negative reaction.”