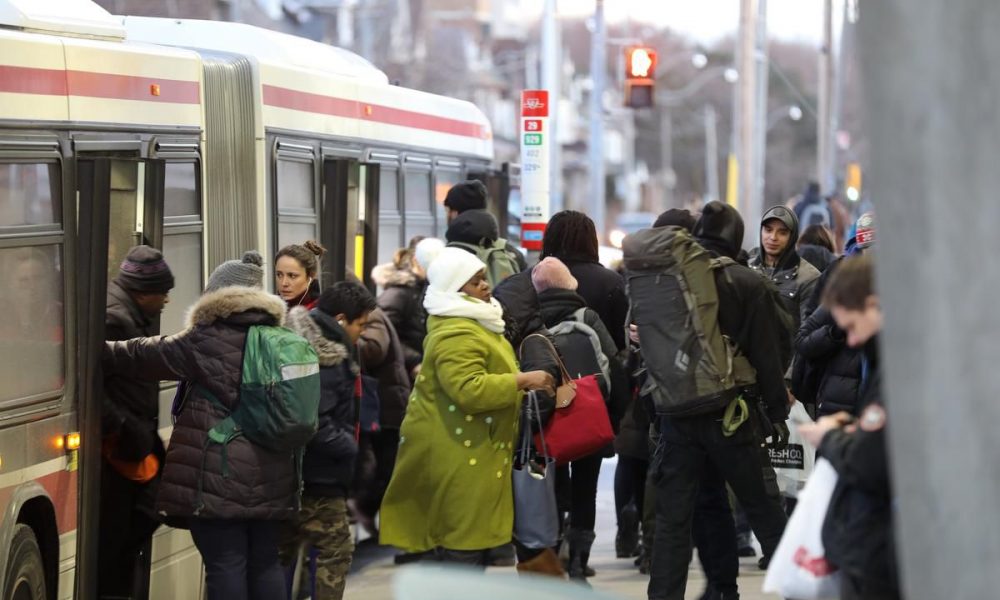 It only takes a few minutes for the TTC stops at Dufferin and Bloor to become jammed with people waiting in line for a bus — so what’s going to happen when thousands of new residents move into the area?

On any given weekday travellers pour up the stairs from the subway stop below. Teenagers from nearby Bloor Collegiate stream to the bus. The students share jokes and listen to music on each other’s headphones, standing at the bus stop alongside people who’ve just wrapped up an afternoon of shopping at the popular Dufferin Mall.

You’ll find local residents in the line, like Kerry McArthur, a business owner who sometimes uses the Dufferin bus to get around.

“The bus can get pretty packed. I’m not looking forward to getting on,” McArthur says, as she stays warm inside Dufferin station on a frigid afternoon, looking through the glass for the southbound Dufferin 29 bus. It’s the fourth busiest bus route in Toronto with a daily ridership of 39,720 boardings, according to the latest TTC figures.

McArthur and others in her community are anxious because in the coming years the already crowded Dufferin-Bloor area will become home to a major development that will see about 2,100 units of housing, a mix of apartment units and condos that is still being ironed out by the development partnership of Capital Developments and Metropia.

And recently, residents learned that another corporation, Primaris, is interested in developing the north parking lot of the Dufferin Mall, just south of Bloor, and turning it into as many as four apartment towers. A community meeting between residents and the developer is planned for Monday night, although the project is just an idea with no formal drawings.

Opinion | Shawn Micallef: Politicians who decide on public transit need to know the system. That starts with riding it

The TTC needs $33.5 billion to keep the system functional — roughly two-thirds of which are unfunded, report says

Meanwhile another developer received approval last year from the city to construct Reimagine Galleria — six buildings a few blocks north, at Dufferin and Dupont St., the current 8-hectare site of the Galleria Mall shopping centre and a community centre. The 10-year build-out calls for 2,800 residential units, including 150 affordable rental apartments.

And there are other developments planned for Dufferin as far south as Queen St. and as far north as the Yorkdale Mall area.

Taken together, there’s little argument that all of these projects will place heavy demands on Dufferin, a street that a century and a half ago was a muddy, underused roadway, but is now bursting at the seams.

Dufferin and Bloor is ground zero for the development boom, which has the attention of local residents.

They worry that transit, roads, parks, schools and local infrastructure might not be able to support the planned influx of future residents to the area.

The service on the Dufferin bus is a major sore point.

Locals say sometimes service is sporadic, with 10- or 20-minute waits, followed by two or three buses arriving in a row. And it’s often standing room only once you get on board — both during the week and on weekends.

Members of a newly formed community group say they aren’t out to try to block the new projects slated for their community.

“We’re not against residential development or intensification — you hear about residents’ groups concerned about heights, parking, things like that. Those aren’t the primary concerns for us. We’re concerned about things that have an impact on diversity, affordability and inclusion in our neighbourhood,” says Emily Paradis, co-chair of Build a Better Bloor Dufferin (BBBD), a local community group in the area that is watching the planned development projects closely.

“We recognize that downtown neighbourhoods, especially those close to the subway line, should intensify. It’s where development should be happening. We have a fantastic neighbourhood and we’re proud and happy to accept new folks,” Paradis says.

“But what we’re concerned about is that development happen in an intentional way that takes into account the pressures on existing infrastructure especially social infrastructure like schools, arts organizations, non-profits, affordable housing, park space as well as community and recreation spaces,” she adds.

Monday’s meeting between the developer Primaris, BBBD members and other residents was called after the surprise news the company was interested in turning Dufferin Mall’s northern parking lots into towers.

The site in question is across the street from a three-hectare parcel of land the Toronto District School Board (TDSB) sold for redevelopment a few years ago, land that is part of the Bloor-Dufferin project involving Capital and Metropia.

The Bloor-Dufferin project is the subject of a Local Planning Appeal Tribunal, an adjudicative body that hears cases related to municipal planning and land matters. The developer has launched an appeal to the body, arguing the city hasn’t made a decision on the development application within the time prescribed in the Ontario Planning Act.

One sticking point for the city is that the current zoning for the area doesn’t allow for significant heights, a spokesperson in the city’s planning department explained. The project calls for seven new buildings ranging from six to 40 storeys.

So the conversations happening between the city and the developer are about striking the right balance in terms of heights and densities for the project, the planning official says.

But the project will also feature a new park and new streets, which the city sees as “good things” the planning official added.

Danny Roth, a spokesperson for Capital Developments, which is handling marketing and media for the project, said in a statement: “We believe that the ongoing approval process and the contributions of city staff, the local councillor (Ana Bailao) and area residents, together with our distinct vision for the site, will ensure a development influenced by the neighbourhood’s past, invigorated by the current community, and inspired by the future needs of an increasingly dynamic city.”

He declined to comment further because the project is before the appeal tribunal.

Meanwhile, the new Dufferin Mall parking lot plan — Primaris hopes to present a rezoning application to the city sometime in May or June — has only added to residents’ fears about the cumulative effect all of this development will have in the coming years.

“When this type of redevelopment starts to pick up speed, that puts pressure on land values in the neighbourhood. We see residential rents increasing and lower and moderate tenants getting pushed out as a result,” Paradis, the co-chair of the BBBD groups, says.

“Commercial rents are increasing too. We’ve seen arts organizations and non-profit front-line services having trouble retaining spaces in the neighbourhood. A number have had to move due to increased costs and rents. We want spaces that non-profits can have access to,” she adds.

The Bloor-Dufferin area also has a shortage of purpose-built rental buildings (many area renters live in basement apartments).

Matthew Kingston, vice-president of development for Primaris and a resident who has lived in the Bloor-Dufferin area with his family since 2014, says it’s the company’s “intention today” for all of its residential towers on the site to be purpose-built rental apartments, but that is subject to what happens in the future with government policies.

“For example if rent control was brought back by a new (provincial) government and we were at a stage when we were looking to start leasing, or we hadn’t completed leasing yet, we might need to change the tenure because it may no longer be financially viable for us to stay as rental,” Kingston says.

Primaris, a developer and retail mall owner, owns the 10 hectares the Dufferin Mall sits on.

Regarding the congestion caused by buses and cars on Dufferin and the impact the new developments will have on this, Kingston argues alternative modes of transportation need to be brought into the mix.

“Lyft, Uber, how will they work to alleviate traffic? What about bike sharing? I use a bike share to get to work every day at Yonge and Adelaide. Getting downtown is nice from our neighbourhood. I think we’ve been car-centric as a city. We need to look at alternative modes,” he says.

Deputy Mayor Ana Bailao, the councillor for Davenport, which Dufferin St. runs through, says she has been pushing the TTC since 2016 to look at its transit service on Dufferin in light of the increasing development.

Her push played a role in the TTC introducing an express bus service in October that only stops at major intersections.

“The city has two options. Either we say we’re going to close our doors to new people coming into the city, or we’re going to plan and invest in our services and in growing our city. I think what we have to do — it is not enough now — but we’re continuing to look at the Dufferin route,” she said in an interview.

“So these are the things that are important to incorporate as these developments are approved.”

As for Dufferin and Bloor, Bailao says there are discussions going on at the city about whether a tunnel should be built from the north side to the south side of Bloor to lessen the pedestrian activity on the street corners of that intersection.

She says the city has made “mistakes” in planning in other parts of the city — Liberty Village for example where “transit is still not there” to the levels needed to meet the demands of the community.

Bailao says she is “fighting hard” to ensure those mistakes aren’t repeated. 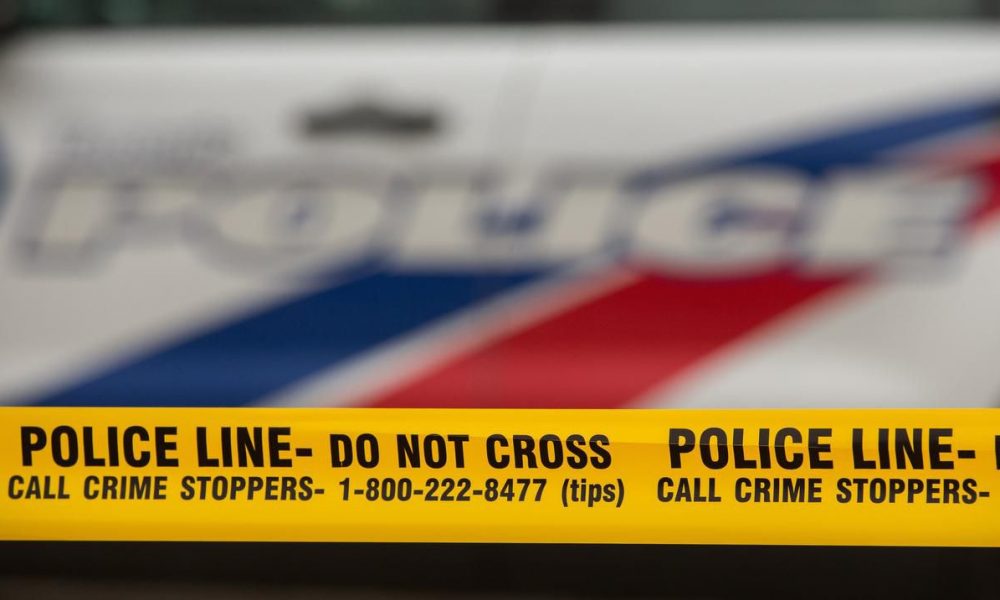 A man has sustained serious injuries after he was struck by a vehicle near the city’s Briar Hill neighbourhood on Monday evening, Toronto police said.

They responded to a call just before 7 p.m. near Dufferin St. and Wingold Ave. The pedestrian, who is thought to be between 50 and 60-years-old, was rushed to a trauma centre.

The driver remained on the scene. Portions of roads in the area are closed.