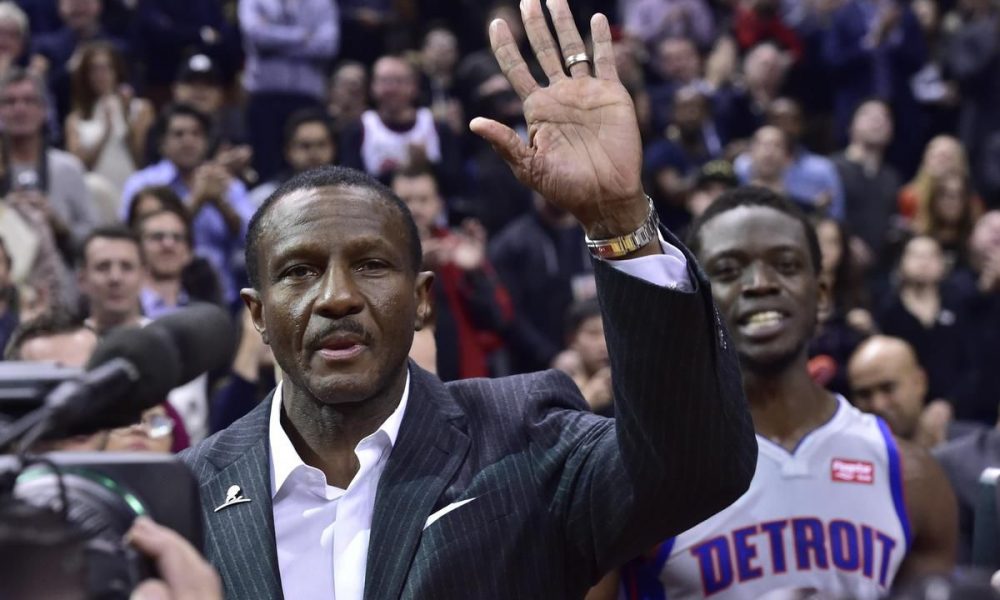 When it’s all said and done, when careers are over and it’s time to sit on the porch and reflect, Dwane Casey is going to look back on his seven seasons in Toronto, a time of unprecedented success and growth with the Raptors, and his chest will swell.

It might not be for a few years and there are many more NBA wars to be fought and won or lost, but that day is assuredly coming and the most successful stretch in franchise history will relish in what he did.

“I left a lot of blood, sweat and tears here, I left here with my head high and did what I was asked to do,” Casey, now the head coach of the Detroit Pistons, said on the occasion of his return to Toronto for the first time since the Raptors fired him in May.

“I know revisionist history and everyone wants to take credit for the wins and the losses is an orphan. I’ll take all the losses but I know what we started with, how it was built, what was built and how it got there.

“I take total pride in that.”

Casey’s imprint on the franchise cannot be understated. During his seven-year run, the Raptors went from an afterthought to a perennial playoff team and a legitimate conference championship contender. His 320 wins — against 241 losses — are the most by any coach in team history; his 21-30 playoff record may not be glittery but it’s better than anyone has ever done in Toronto.

He took a ragtag group that won 23 games his first season and willed it to a franchise-record 59 wins last season, weeks before he was fired after a playoff sweep administered by LeBron James and the Cleveland Cavaliers.

There was bitterness in the immediate aftermath of that dismissal and some of it lingers. But it’s slowly being replaced by the realization that what Casey accomplished here was significant.

Remnants of Casey’s fingerprints remain on the Raptors roster that boasted an NBA-best 12-2 record going into Wednesday night’s game. He was patient enough and prescient enough to see something special in the likes of Pascal Siakam, Fred VanVleet, Delon Wright, Jonas Valanciunas, all young players who have morphed into major contributors on a very good team.

“That also is rewarding, to see a kid like Pascal get player of the week and grow to where he is,” Casey said. “I saw Pascal a lot this summer because he’s in L.A. and our guys were in L.A. working out, so I got to watch him work.

“I knew a lot of great things were going to happen for him, watched Fred, Delon, Norm (Powell), all those young kids grow, it just great to see.”

VanVleet, for one, appreciates the opportunity Casey gave an undrafted and undersized point guard; turning VanVleet from a D Leaguer into a finalist of the NBA’s Sixth Man of the Year award last season.

“Obviously, I think that he respected the work that I put in coming in everyday — from training camp — just coming in, busting my tail and working, staying ready, and I give him a lot of credit for throwing me in there sometimes late in fourth quarters or whenever we needed a spark my rookie year, playing a little bit in the playoffs and that experience just kind of helped propel me,” VanVleet said. “And then, obviously, last year my role grew a lot and I earned the trust over time.”

He was feted with a tribute video during the first quarter of Wednesday’s a game, a way for the franchise to say thank you for his service and success.

The fans began periodic cheers for Casey the minute he walked on the court after the national anthems and the cheers reached a crescendo with a lengthy standing ovation during the tribute.

The former coach thumped his chest in appreciation.

“I’m not going to get emotional,” Casey said Wednesday morning.

“I’ll appreciate it, I’ll really absorb whatever comes my way, the boos or the cheers, but not to the point where I’m going to cry or anything like that. I wouldn’t live it down.”

Casey, his wife and two children were integral parts of their adopted homeland over seven years, and Casey said he was proud of developing Canadian traits.

“Just, again, treating people right, doing right by people, being nice to people, being honest with people,” he said. “All those things are positive Canadian norms and values that I hope my kids picked up, and it rubbed off on me, too.”

And it’s not the only thing Casey and his family have exported to Detroit.

“Tim Hortons,” he said. “My son loves Timbits and thank God they have Timbits and Tim Hortons in Detroit because he wouldn’t be able to survive.”