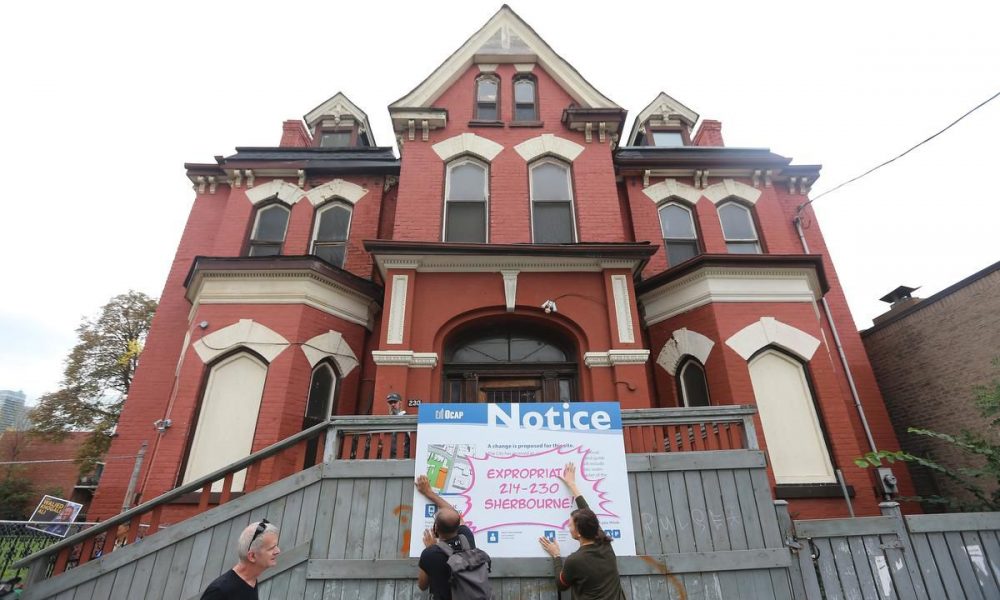 On one side of the street, like scarecrows, a clutch of raggedy homeless men and women while away the hours outside All Saints Anglican Church.

On the other side of the street, an empty lot: an expanse of grass with a couple of trees, cordoned off by a chain-link fence.

At the edge of the lot sits an enormous vacant house, once upon a time stately, and, later, not so stately, now fallen into ramshackle disrepair. But for decades, until a few years ago, it had offered 30 rooms for board. For people who live in rooms. If they could scrape together the money, with social assistance.

All of it owned by the same couple, Bhushan and Rekha Taneja, whose large real estate portfolio includes many other rooming houses across Toronto.

And for a decade that lot, at the corner of Dundas and Sherbourne Streets, has sat unused while property values in the city have skyrocketed.

Perhaps not yet enriching enough for the owners in a metropolis bursting its seams. Maybe not yet lucrative enough to sell in one of the few remaining urban corridors where the critically impoverished carve out a slapdash existence.

The idle lots and vacant house at 214-230 Sherbourne were put on the market early this year. Long enough for the Toronto Affordable Housing Office to at least briefly consider buying. And then it was abruptly taken off the market.

“There was no real engagement,” says Sean Gadon, director of the Affordable Housing Office. “It may have also been the result of (the property) being in the media at the time. My understanding is that the owners were only interested in selling to private buyers.”

Think condos, along a downtown swath, astride an arterial road that has undergone extensive gentrification, in parts, but is still a prime locus for rooming houses, mission houses, soup kitchens and decrepit social housing.

Together, the empty lot and the vacant house are worth at least $4 million, according to city tax records, which seems awfully low in developer-eat-developer Toronto.

A shoehorned condo tower seems inappropriate for this location; not many youngish upwardly mobile buyers would likely be interested, living cheek to jowl with the destitute.But the same could be said for other urban niches which have been scooped up and transformed, for better or worse.

These properties have long been eyed by poverty activists, pleading with the city to expropriate the land and vacant residence as Toronto tries to address a low income housing crisis. On Thursday, the Ontario Coalition Against Poverty held a rally outside the fence — a fence which had been mended, at its southern edge just yesterday morning, maybe to bolster security against the demonstration.

“We’re fixing up the house, too,” a man who described himself as a superintendent for the empty building told the Star. “We made repairs last year, but the eaves weren’t fixed, the water came through and there was a lot of damage.”

OCAP placards were removed from the fencing and “No Trespassing” signs are dotted around the house.

The owners did not return the Star’s calls yesterday.

At one point, they planned to demolish the house, as the homes which formerly stood on the lots were razed, but were prevented from doing so by a last-minute heritage order, and forced, instead, to make repairs.

“They want to start a bidding war for it,” said rally organizer Yogi Acharya. “And they keep raising the rents for all their other rooming houses. How can you afford to pay $950 for a basement room when you’re getting $733 in social assistance a month?”

The owners, of course, can do what they want.

And that, essentially, is a big part of the problem in a city where Toronto City Council staff last year estimated 15,000 to 28,000 homes are unoccupied, a figure arrived at by studying Toronto Hydro data for addresses where no electricity or water had been consumed.

Statistics Canada puts the figure for unoccupied homes in the GTA at 99,000.

But you can’t arm-twist owners into selling.

Well, actually you can, under the provincial Expropriation Act, but only for narrow purposes, public service projects. Like building a subway.

Or social housing revitalization endeavours, such as the George St. Revitalization Project. That undertaking — it incorporates a long-term care home with 378 beds, a 100-bed emergency shelter for men and a 130-bed “transitional living” service for men and women — was green-lit in principal in 2013, but only received funding approval this past February. At the earliest, construction won’t begin until 2020.

While they live in miserable conditions.

While the cascading consequences of homelessness and marginal shelter contribute to a slew of community ills, including increased crime.

“The best way to address social problems is through social policies,” said Acharya.

Gadon counters that the city has done so, with “strategic acquisitions” deemed urgent, such as the Parkdale Activity Recreation Centre and Edmond Place non-profit housing community, erected on land that had sat unused for seven years after buildings had been destroyed by a fire. Among the most ambitious revitalization projects was the massive West Don Lands, expropriated by the province at the urging of then-Mayor Art Eggleton.

“The broader public interest allows for that,” says Gadon. “The challenge is that they come at a cost.”

The city can only purchase property “candidates” for expropriation at market value, which is ever more expensive. “And that’s more of a political decision,” notes Gadon.

In June, city council instructed staff to develop a strategy “framework” for expropriating and acquiring properties for housing. “We’re looking for a sensible way to approach this,” says Gadon. “How do you determine funding? Where will that money come from? How do you deal with willing or unwilling sellers?”

That report will be submitted next year.

There is also the option of initiating a vacant-house tax, with the funds reinvested in affordable housing initiatives. Vancouver went in that direction, recently implementing an “Empty Homes Tax” for vacant and under-used residential properties, homes that have been unoccupied for at least six months, albeit with generous exemptions. The one-per-cent tax is expected to generate $30 million in revenue this year alone.

Toronto council is looking at this, too. Gadon says a better, more immediate alternative could rest in making creative use of properties the city already owns: public land, TTC land and neglected Toronto Housing assets.

“We’ve concentrated a fair amount of time on what sites does the city have that are city-owned.”

Eighteen such properties have been identified.

No, the weeds will continue to grow there. Six empty lots. One vacant house.

Until, it seems, the owners decide the time is ripe to make a killing.