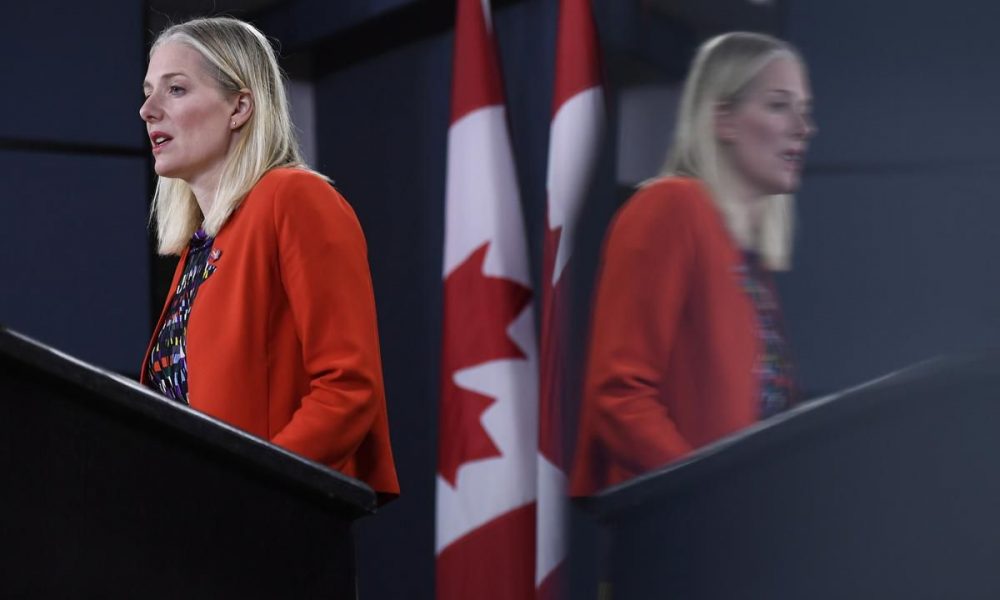 OTTAWA—Environment Minister Catherine McKenna says Canada will meet its climate commitment under the Paris Agreement, even though new government projections show the country will have to make up for a greater shortfall in emissions reductions than previously expected, thanks in large part to Ontario’s decision to scrap its cap-and-trade program.

The new projections were part of a year-end report from McKenna and senior government officials on Canada’s plan to fight climate change. Officials also unveiled new details on how the federal carbon price will apply to heavy emitters, and laid out proposed regulations to make fuels like gasoline cleaner.

Despite the latest projections, McKenna insisted Canada will hit its target to reduce emissions to 30 per cent below 2005 levels by 2030 — a target that federal and provincial environment commissioners, as well as an estimate from the United Nations, say Canada is on track to miss.

The government’s new projections say Canada will reap 223 megatonnes of emissions reductions in 2030 based on measures to fight climate change in the oil and gas, electricity, transportation, agriculture and other sectors. But it leaves a gap of 79 megatonnes that still need to be cut to hit the Paris target that year — a gap that is 13 megatonnes larger than the government projected last year.

McKenna attributed “setbacks” to Ontario’s decision to scrap the provinces cap-and-trade system and implement a new plan based on a $400-million fund to encourage clean-tech investment, which the minister characterized as a “backtrack.”

But she said the larger shortfall will still be covered by the impacts of government investments in new public transit and clean technology, more robust provincial plans like the one recently set forth in British Columbia, as well as future improvements in carbon capture and other technologies that can be expected in the coming years.

To illustrate the point, she held up her smart phone.

“This iPhone didn’t exist 10 years ago. We’re talking about 2030. That’s 12 years,” she said. “We’re going to figure out the way forward in a cost-effective manner, but we’re committed to meeting our target.”

Green Party Leader Elizabeth May said the federal targets, which were set by former Conservative prime minister Stephen Harper, are too weak. She pointed to the bombshell report issued this fall that said global emissions will need to drop by 45 per cent below 2005 levels in 2030 and hit net zero by mid-century if the world is to avoid some of the worst effects of climate change.

“We’re pretending that we’re climate leaders,” she said. “If we’re going to maintain a livable world, we have to do much more and we literally are out of time.”

The government’s plan to reduce emissions is based on a slew of measures, including the implementation of a carbon price in each province and territory that meets a minimum set of federal standards. In October, Ottawa announced it would impose its carbon price in Ontario, Saskatchewan, Manitoba and New Brunswick, where provincial governments argue a carbon price will hurt their economies and that they can cut emissions in other ways.

The federal carbon plan has two prongs: a fuel tax that will begin in April, and a separate pricing system for heavy industrial emitters.

On Thursday, officials provided more details on the industrial system, which kicks in Jan. 1 and will apply to 74 sectors. The government will set an emissions threshold for each sector; companies that emit less than that threshold will receive credits, and those that emit more will have to buy credits from others or pay the carbon price to Ottawa.

Conservatives have criticized this part of the carbon price as an unfair break for big business, McKenna denied the government was letting emitters off the hook. She said the idea is to make sure the carbon price doesn’t put these companies at a disadvantage with international peers.

“How do you make sure they’re competitive, and keep these companies here in Canada, innovating, creating solutions? And that’s how we arrived at these numbers,” she said.

Officials also outlined proposed regulations to make fuel cleaner — a key part of Canada’s climate plan that mainly affects the transportation sector, which is currently responsible for 25 per cent of Canada’s emissions. The plan aims to ensure the carbon intensity — emissions per unit burned — of liquid fuels is reduced by 11 per cent over the next 12 years. The idea is that regulations will encourage producers to find ways to make cleaner fuel and increase the use of lower-emission fuels like ethanol and renewable diesel.

McKenna didn’t say how much this would increase gas prices, but that the proposed measures would lead to “very minimal costs to consumers” while spurring innovation that could create up to 31,000 new jobs in the coming years.

“This is a huge economic opportunity. This is where the world is going,” she said.

With files from Susan Delacourt