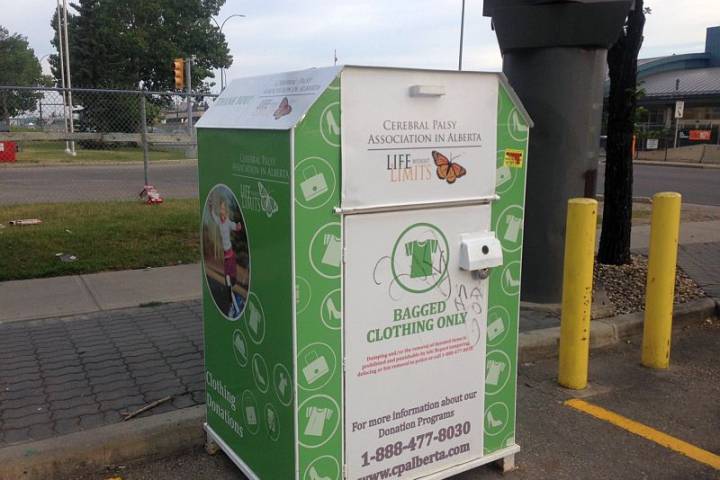 A number of charities serving Alberta that use donation bins are reviewing their safety protocol after the death of a man in Vancouver this week.

On Monday, a man became trapped and died in a donation bin in West Vancouver, the 5th such death in the region since 2015.

A similar death took place in Calgary in July 2017, followed by a serious injury the following summer.

Goodwill Industries of Alberta is one charity that has installed upgraded boxes. Some of the improvements include rollover chutes — which block inside access while pulled open — and stronger locks.

“We take it very seriously and we do everything we can to ensure that when people choose to use the after-hour bins that every essence of safety is involved,” said Brenda Hawryluk, the director of brand integrity and business relations at Goodwill.

Diabetes Canada, which has 4,000 boxes located across Canada, is working with its Canadian-based manufacturer to retrofit its bins, spokesperson Kathleen Powderley told Global News by email on Friday.

“Although death or injury related to the misuse of clothing donation bins is not common, we feel that if there is an opportunity to prevent this type of tragic incident, we must make every effort to find a solution,” Powderley wrote.

Inclusion Alberta, which specializes in helping children and adults with special needs, has 50 bins in the province, about a quarter of which are older models, according to the organization’s CEO, Trish Bowman.

“In terms of these 12 boxes, we’ll be taking some immediate action in terms of increasing the safety notices on the boxes,” Bowman said. “We’re going to be speaking with first responders to see if there’s anything that we could be doing to ensure they can respond quickly should someone get trapped in a box.”


READ MORE:
Edmonton volunteers return this winter to serve chili to the homeless

“People that are sleeping [in the bins] or people that are seeking refuge are pretty desperate. They’re looking for ways to stay warm, stay dry,” said Matt Ashdown, the director of community programs and services at the organization.

For charities like Goodwill, it’s an effort to ensure safety while maintaining a valuable revenue tool.

“Without the donations, we do not have the revenue stream for our stores. Without the venue stream, we’re not able to provide almost 90 cents to every dollar back into our mission,” Hawryluk said.