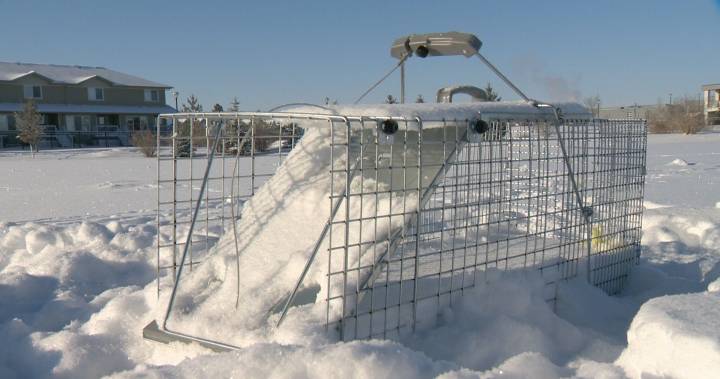 A growing rabbit population has led to a rabbit control pilot program in the City of Regina, which has some residents raising concerns and speaking out.

“The temperature, it’s way too cold to be doing trapping. There could be other animals that get caught in there — cats, dogs,” said Harbour Landing resident Karen Roberts.

Roberts is new to Harbour Landing and said she was appalled when she came across traps in the soccer field, across the street from the Grasslands plaza.

The city said the program was started last year in response to growing concerns from citizens and developers in the newer areas of the city.

“When the snow gets deeper, the rabbits get a little bit more aggressive, a little bit more hungry in the sense they start to go after city trees,” said Russell Eirich, manager of forestry, pest control and horticulture with the City of Regina.

Eirich adds while other deterrents are being explored, the damage to the trees costs money and causes problems for homeowners.

Last year, the city began its pilot program, catching 27 rabbits. It released 10 and euthanized the other 17. This year, Eirich said most of the ones the city traps will be euthanized.

But wildlife biologist John Polson said trapping jackrabbits is not done in other cities, including Saskatoon.

“To me it’s a real waste of taxpayers money and I just don’t see why they’re doing it,” Polson said. “Eventually what’s going to happen is disease will take them. Any population that gets too high, eventually something thins them out.”

Polson adds that the traps the city is using are not conducive to catching rabbits, saying they won’t survive the cold weather.

“Jackrabbits just freak out in any wire enclosure. They can’t go into anything open; they just don’t survive in that,” Polson said.

Eirich said the traps are checked twice a day and the city will monitor the program to determine if it will continue in the future.