The Canadian Red Cross says at least a dozen homes had to be evacuated late Thursday because of flash flooding in riverfront areas around Sussex, N.B.

The town’s Emergency Operations group issued an advisory late Thursday, saying water levels had exceeded the flood stage and that residents in affected areas should evacuate.

The Red Cross was arranging emergency lodging at hotels for at least 17 people, with more requests anticipated overnight following heavy rains and fierce winds that also knocked out power in the province as well as in Nova Scotia.

An emergency shelter had been set up at the Saunders Irving Chapel at Kingswood University.

The town says on its website that the Trout Creek crested at 19.75 meters overnight and water levels were “trending downward” as of 4 a.m.

NB Power says about 6,000 customers were affected by outages, with most in the Kennebecasis Valley Fundy area, while Nova Scotia Power said about 12,000 customers were without electricity in the wake of winds that exceeded 80 km/h.

The winds also ripped part of the roof off an apartment building in Moncton, N.B., where eight people were forced from four apartments in the 12-unit building.

This is just the latest flooding to affect the small New Brunswick community following less serious localized flooding last weekend along the Kennebecasis and Canaan rivers. 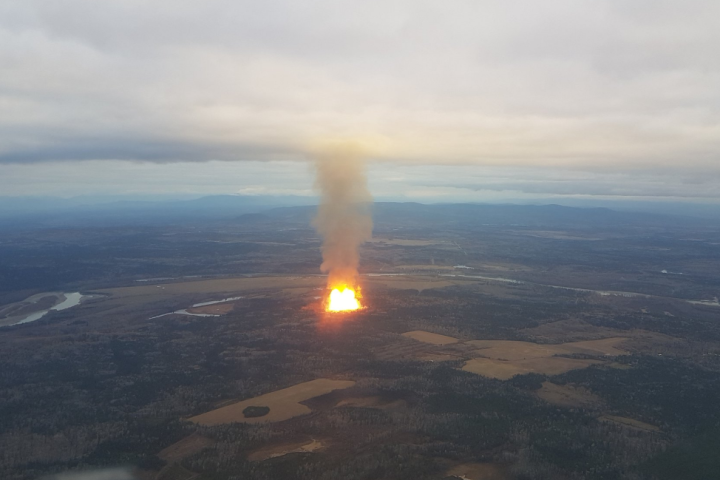 As many as 100 people have been evacuated from the reserve of the Lheidli T’enneh First Nation north of Prince George after a pipeline explosion generated a massive fire that could be seen from the campus of the University of Northern B.C. (UNBC) on Tuesday.

Enbridge confirmed that a rupture happened on a line it owns and operates at about 5:45 p.m., about 13.5 kilometres north of Prince George, said a company statement.

WATCH: Joshua Seymour was right nearby when a pipeline ruptured close to Prince George

The rupture happened at a site in a rural area and no injuries were reported.

Emergency crews with the company responded, isolated and were working to depressurize two natural gas transmissions lines in the area so that the incident could be contained, the statement added.

The Prince George RCMP confirmed that an explosion happened, forcing evacuations in the immediate vicinity of the fire.

In a news release, police said they responded to a call about an explosion close to Landooz Road at about 5:30 p.m.

Homes within several kilometres were evacuated, but the evacuation zone was later reduced to one kilometre. Some who were initially advised to leave were later allowed to go home.

The RCMP said the explosion “appeared to have” involved an Enbridge natural gas pipeline, and that there were no injuries nor any reported damage except to the pipeline itself.

The gas supply was shut down and there’s not yet any indication of what caused the blast.

Bryan Seymour took this video from the reserve of the Lheidli T’enneh First Nation, which is located nearby.

Seymour heard a “big explosion” around 6 p.m. that left his house shaking.

He initially thought it was an excavator, as development has been happening close to his home — but the noise “carried on longer than it should have.”

“My mother got up to look out the window, she saw a big cloud of smoke, a mushroom cloud of fire,” Seymour said.

He said there are two reserves that straddle the Fraser River near Prince George, and the explosion happened on the north side, between the reserve and the Salmon Valley.

Seymour went on to say a pipeline runs under the First Nation’s evacuation route, leaving residents “kind of shaken” that they had to drive over it.

He noted, however, that there was a shutoff valve on the side of the road.

Social media lit up with photos and video of the fire, which appeared to be burning at a distance from the city, though it was still visible there.

A video shot from the UNBC campus by JP Martin shows a fireball burning in the distance.

Martin, a schoolteacher in the Prince George school district, described it as a “massive, massive fireball.”

He said that he stood on the campus watching the fire for about 15 minutes and that the fireball stayed “very, very big, and every once in a while it would definitely expand.”

Martin said the winds were too strong to hear any possible explosions, but he said the strength of the fire didn’t dissipate while he was there.

“We looked across the river, and just beyond the trees there was a huge fireball going into the sky,” she said.

“We knew it was a pipeline because that was all it could be with that kind of noise.”

Spraggs was first to call the incident into Spectra Energy, a company that does maintenance work on pipelines.

She later received a call back from Enbridge.

Spraggs said the fire only lasted temporarily — the sky was dark again by the time she spoke with Global News.