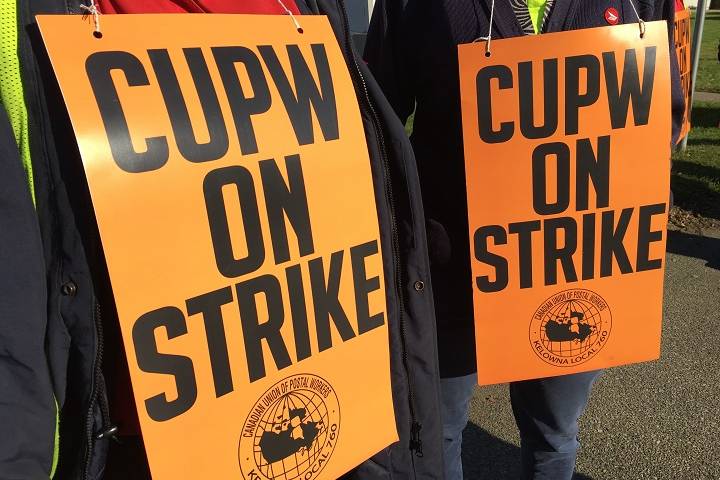 A Delta small business owner says operations like hers are getting caught in the crossfire between Canada Post and striking postal workers.

The Canadian Union of Postal Workers (CUPW) has been engaging in rotating strikes since late October, with health and safety concerns a key sticking point in stalled negotiations.

The federal government has issued a 9 p.m. PT deadline for the union to accept its latest deal; CUPW said it would reject the offer on Friday.

But Carol Jolly, co-owner of CanEngrave Signs and Printing says the two sides need to get on with it, with the strike holding up key deliveries — both products she ships out, and payments coming in.

“It’s very frustrating when you have bills to pay and you have supplies that you need to buy so you can get your products out, and you have products out in the mail that aren’t getting to your customers,” she said.

Jolly said customers have for the most part been accommodating, but said it’s tough for her to have custom plaques destined for clients’ awards banquets not show up in time.

She added that with payment cheques not coming in on time, it’s also making it hard for her to pay her staff and keep her business operating.

WATCH: (Aired Nov. 15) Is it time for the government to end the Canada Post strikes?

“I have a piece of equipment here waiting for inks. I can’t go and get my inks because I don’t have any money… which means I have products sitting here which need to be imprinted so they can be sent to the customer,” she said.

Prime Minister Justin Trudeau warned last week that all options would be on the table when it comes to ending the postal disruptions, which according to a government source, could include back-to-work legislation.


READ MORE:
Canada Post’s rotating strikes: Everything you need to know about it

Meanwhile, about 100 members of the union gathered outside the federal Liberal convention in Kelowna on Saturday, some toting signs with messages including “negotiate, don’t legislate.”

The federal government has offered a two per cent wage increase and a $10-million health and safety fund, along with increased job security for rural and suburban workers.

The union says it’s not enough, arguing mail carriers are the most injured group of all federal employees.

Jolly said she’s sympathetic to the postal workers’ plight, but that they need to understand the effects on small businesses like hers.

–With files from Jordan Armstrong and the Canadian Press