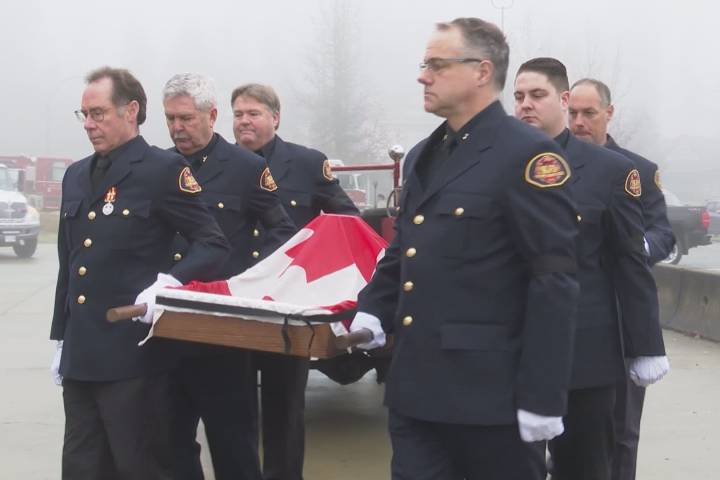 Hundreds of people turned out in foggy Port Alberni weather for an honour guard procession to pay tribute to a fallen firefighter.

Carla Kulczycki died earlier this month at the age of 46 after a 16-month battle with glioblastoma, an aggressive form a brain cancer associated with her work as a firefighter.

Friends and colleagues remembered her Sunday as a team player and someone who was heavily involved in both the department’s social activities and the community.

“She’s a dedicated, hard-working, loyal person who she just got it done and she was there for everybody all the time and she’s going to be deeply, deeply missed,” said Const. Jennifer Maher with the Saanich police.

“Carla was a teammate. She was the champion of the underdogs, she was the person who you could call on for anything, anytime, anywhere, anyhow. She wanted to make a difference in her life and she certainly did,” said Jeannette Badovinac, a Port Alberni teacher.

Kulczycki was a 16-year veteran of the Sproat Lake Volunteer Fire Department and was given a full line of duty service. 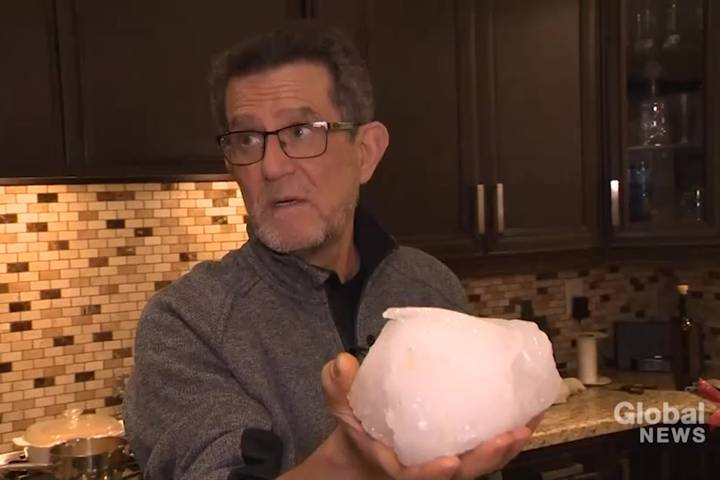 A Mississauga man says he and his family are lucky to be safe after a large boulder of ice, believed to have fallen from an airplane, crashed through the roof of his home, landing steps away from his bed.

Tony Caccavo told Global News that his wife heard a loud bang at around 6:30 a.m. on Wednesday and saw the damage inside the closet of their bedroom. He said she called him and he returned to their home, located near Winston Churchill Boulevard and The Collegeway about 20 kilometres south of Toronto Pearson International Airport, to see what happened.

“At first I thought that I had a leak in the roof and then it built up the ice, and then it fell off,” Caccavo said.


READ MORE:
Chunk of ice falls from WestJet plane and crashes through roof of Calgary home

“But when I came home after my wife called, I saw the hole and I said, ‘No way, that must have come from the air.’”

He said the force of the impact threw a few of the ice chunks under the bed several feet away.

“I was going nuts. I said, ‘What the hell?’ We’re not safe here, even being at home sleeping. One minute can change everything. We are very lucky in a way,” Caccavo said.

He said they are waiting for answers from officials about what happened. Caccavo said his insurance company has agreed to cover most of the damage.

According to archived flight data on the airport’s website, a Boeing 767-300 flying to Toronto from Las Vegas flew over Caccavo’s neighbourhood at 6:29 a.m.

Air Canada Flight 1854 from Las Vegas was estimated to have arrived at Pearson airport at 6:56 a.m. An Air Canada spokesperson told Global News they weren’t aware of any of the company’s airplanes being involved in “this type of situation.”

WestJet Flight 1119 from Las Vegas was estimated to have arrived at Pearson airport at 6:53 a.m. A spokesperson for the airline was unavailable for comment Wednesday evening.

Global News contacted Transport Canada, the federal department with responsibility for aviation, Wednesday evening to ask about the incident, but officials weren’t available to comment.

A spokesperson for the Transportation Safety Board of Canada, the agency responsible for investigating major incidents involving all major modes of transportation, told Global News that as of Wednesday evening, officials weren’t investigating.

When asked about the damage, aviation expert Jock Williams said it’s highly likely the ice came from an airplane.

“It takes a mile of falling to get the kind of velocity that you’d need to penetrate a roof,” he told Global News.

Williams said ice buildup on planes doesn’t form in boulders like the ones shown by Caccavo, but rather in thin sheets. He speculated on a couple of causes for the ice falling.

“Maybe when they cycled the gear down to land, then a hunk of the ice was knocked free,” he said, adding there may have been a leak point in the landing gear well.

The other theory was that uncontaminated liquid pumped into the lavatory system by personnel on the ground may have built up just inside the compartment door and came free during the flight.

“All you need is a little bit of turbulence,” Williams said.

“It throws a hunk of ice that weighs a couple of pounds against a very thin, aluminum door. It opens the door, the ice falls out, the door falls back into place and is pushed in by the air pressure.”

He said this type of incident isn’t unheard of, adding there could be many more incidents in unoccupied areas.

“There are probably a lot more of these things then we know about because the ice lands in somebody’s backyard or it lands in some place nobody ever finds it,” Williams said.

— With files from Kamil Karamali

These big ice chunks tore through the roof of Tony Caccavo’s Mississauga home, believed to have fallen off an airplane flying overhead. No one was injured. “We are so lucky,” he said. @globalnewsto pic.twitter.com/R0pYe5dBSK

Caccavo said there was a big noise around 6:30 this morning. The ice chunks landed in the master bedroom closet and slid under the bed. pic.twitter.com/zzHTxtLCy2 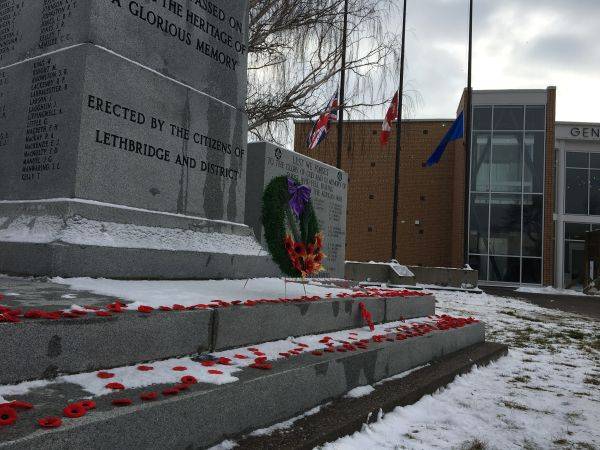 Hundreds gathered at a pair of Lethbridge events to mark Remembrance Day on Sunday.

For veterans like John Moreland, this year had particular meaning.

“It’s almost overwhelming when you think about it,” Moreland said. “100 years ago and watching people in the crowd today, enduring a little bit of cold and snow here, [it’s] nothing like what they endured.”

“I think it’s very important that we remember all the time,” he said.

Sunday marks 100 years since the November 11, 1918 armistice was signed to end the First World War.

The first service took place at 9:30 a.m. at Exhibition Park.

The second started at noon at the cenotaph near city hall.

Moreland spent time with the Navy, Army and Air Force over his 23-year career in the military.

He thinks it’s important for young children to meet and learn from veterans.

“It puts them a little bit closer when they see an actual veteran talking about different things. Whether it was the Cold War, UN tours, Afghanistan, [it] doesn’t matter,” Moreland said. “It puts it to the forefront for the kids and it’s more real for them to actually talk to someone.”

Dennis Jobe served more than three decades in the military, spending many years in Germany after the Second World War.

The reaction he has received from children, he said, has been heart-warming.

“It’s wonderful. I’ve had more youth come and hold me and thank me,” Jobe said. “It’s a rather important, emotional thing, too. I must say, I’m very pleased to see the turnout.”