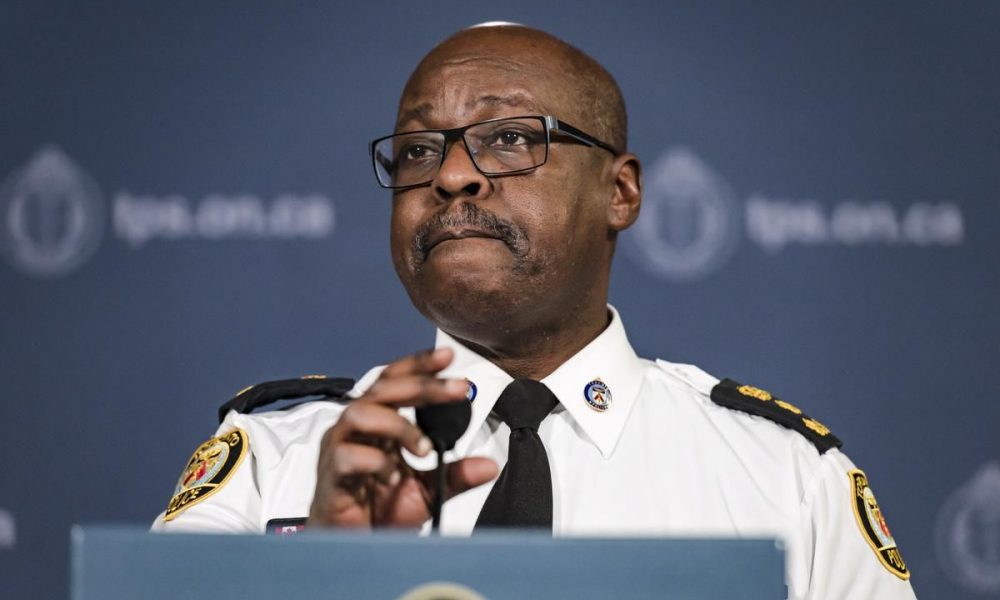 “Not only did we have a high-profile homicide case to look after, we also had to respond to two mass casualty attacks that left a tremendous loss of life and lots of injuries for our citizens.’’

High-profile homicide case: A serial killer preying on the gay community, though Saunders had assured there was no such thing last December, despite tracking orders for the suspect obtained just days earlier, leading ultimately to the arrest of Bruce McArthur on Jan. 18.

Mass casualty attacks: The deliberate van rampage on north Yonge St. in April that killed 10 and injured 16, some critically; the lone shooter carnage on Danforth in July that killed two innocents and wounded 13.

“Two mass casualty incidents in such a short period of time,” said the chief, grimly, recalling a personal nadir for 2018. “I think that was a game-changer. It’s one thing when you’re dealing with gunplay. It’s another thing when you’re walking down the street and looking over your shoulder or you’re sitting in a restaurant with family and friends and the next thing…

“The general public really felt stung by the two mass casualties back to back and it’s still there.”

A year of ominous firsts for Toronto: An unprecedented 96 murders, 51 of them by gunfire; police had recorded 406 shootings as of Sunday. Mass carnage by disturbed individuals, the kind of extremist slaughter we believed, in our smug naïveté, only happened elsewhere.

So, yes, the statistics were skewed by two abnormal and deviant occurrences. But the shootings, my God the shootings.

“I’ve said earlier that most of our gun violence is street gang related and I stand by that. That’s not just Toronto, that’s all urban cities across North America. The street gang issue is our primary concern. Most people that are getting shot are people that are living a high-risk lifestyle, in conjunction with being associated to street gangs. That’s the root of the matter that we have to look at.

“The numbers are one thing. But people that are motivated to shoot other people I’ve got concerns with. If people think that it’s a matter of just arresting and all is well, that’s a far cry from the truth, a far cry from the right solution in today’s environment. You need to have the resources necessary, at the front end and the back end, and our enforcement piece in the middle in order to get this right.”

But what does getting it right mean, practically? Because there is widespread disagreement on where to stick the limited fingers — and the funds — in the dike.

Not carding — street checks which provided police officers with street intel yet was disproportionately borne by the city’s racialized communities and underprivileged neighbourhoods. The police board ended that, just as, three years ago, TAVIS (Toronto Anti-Violence Intervention Strategy) was disbanded.

“To think we can arrest our way out of this is a falsehood,” Saunders stated bluntly, when asked about the ramifications of ditching carding and TAVIS, which some believe has led directly to brazen violence and gangbangers laughing at police.

“Ninety per cent of these folks we arrest get out, will be out and will be continually released,” said Saunders, clearly a shot across the bow at the judicial bail system. He pointed to Project Patton — massive multi-jurisdiction raids in June that resulted in more than 1,000 charges against 75 accused and the largest weapons seizure in the city’s history. Yet most defendants cartwheeled right through bail court. “Some of those members that we arrested were people that were arrested in prior large-scale projects.”

Which might call into question the usefulness of such roust-out-of-bed raids. They certainly do disrupt gang activity and illegal weapons distribution, but only temporarily. Criminals reorganize, gangs reconstitute, the wheels of violence keep on turning.

And, it must be noted, the public by and large favours this type of interdiction. They see all those guns laid out on a display table at the cop shop and there’s a sense that something is being done. But it is not a sustainable solution to urban crime drenched in bloodshed, with innocents caught in the crossfire.

“The enforcement piece plays an important part. I’m not here to say that it’s softer policing. I’m here to say that it’s smarter policing. There have to be agencies at the front end that prevent these young boys from shooting others. There’s a lot of funding that needs to be put in. Not grant funding; core funding, into the communities. Nobody’s ever, that I know of, born saying ‘I want to be a street gang member.’

“The enforcement piece is ours, and then the deterrent factor. When someone shoots someone, they’re going to jail. Developing the relationship piece is what’s critical, first and foremost.’’

This past year, 514 handguns taken off the street, 172 more than 2017. But the underlying factor is what seizes Saunders most. “What’s motivating people to use a gun to resolve issues? Those are things we can’t just do as an enforcement piece. It is necessary but it has to be streamlined, it has to be surgical, it has to be intelligence-led if we’re going to get it right.”

Distilled: “Arresting police is not a success story.”

Well, not so sure about that. We’ve had decades of trying to avert gang affiliation, keep young people off the criminal path via youth programs and precrisis intervention. Some community programs have worked better than others; there’s been precious little auditing of efficiency and always, always, more clamouring for funding. Yet the jails grow more crowded, the promise of opportunity shrivels, the lure of gangs enticing, distrust burgeoning.

“When we go into communities that don’t have the funding, that have no hope, that despair, 99 per cent of those members of the community are law-abiding,’’ Saunders emphasizes. “They care about their babies just like we all do. But at the same time, they have to deal with reality and they’re concerned for their safety.’’

The chief likened gangs to sports teams. “It’s not an individual sport. So when a member from Team A shoots a member from Team B in that particular neighbourhood, it makes it very hard for you as a mom or a dad to pick up the phone and say this is who did it and I saw everything. Because that one person gets apprehended but the rest of the team is still out there. There’s fear of retribution. I would like some methodology in which we can still get that information and translate it so we can make it into a courtroom somehow.”

Because people do call the cops, even in neighbourhoods with a long history of bitterness toward law enforcement. All levels of government, said Saunders, should examine procedures to ensure their safety in co-operating with police. “Our Criminal Code, I think it’s antiquated.”

Maybe so are our presumptions of criminality.

“I want to be candid. I don’t want to make this sound sexy. We take every single shooting seriously. If we have stronger relationships with the community, we have an opportunity to reduce that. But at the end of the day, when a young man takes a gun and shoots, there are different entities that are responsible for that. We are the aftermath of that. What is in front of that? What are the measuring tools to see whether or not things are successful?

“So to dump on me and say, what are you going to do about it? I’m going to educate the public and say if we’re going to do it right, it has to be collective. And I’m going to continue to deliver that message.”

He’ll be doing it, Saunders expects, with some 200 more officers hired by the beginning of 2020. He vows they will be deployed smart, where most needed — “district-focused.” And if the much-vaunted Toronto Police Service’s modernization plan continues as calculated, front-line officers won’t be wasting their time on low-grade call-outs that can deftly be handled by civilian employees, online and via an expanding roster of special constables to relieve the load on front-line cops.

Under that program, within its first 108 days this past year, special constables took on 23,000 calls, Saunders pointed out, amounting to 3,300 hours of police work, which simultaneously reduced the response time on urgent calls.

A city of 2.8 million people. Two million calls to police this past year. Five million “contact points” between police and the public.

“Throughout the year, despite everything that happened, our members have truly done outstanding things. They’ve rescued people from drowning in an elevator. They prevented suicides. They’ve rescued people and pets from freezing water. They brought shoes to homeless people. They’ve supported families by purchasing groceries. They’ve walked into gunfights, knife fights, saved lives and continued to make arrests when needed.”

But has any of it made a difference to the quality of life in Toronto?

“Depends on who you ask.”