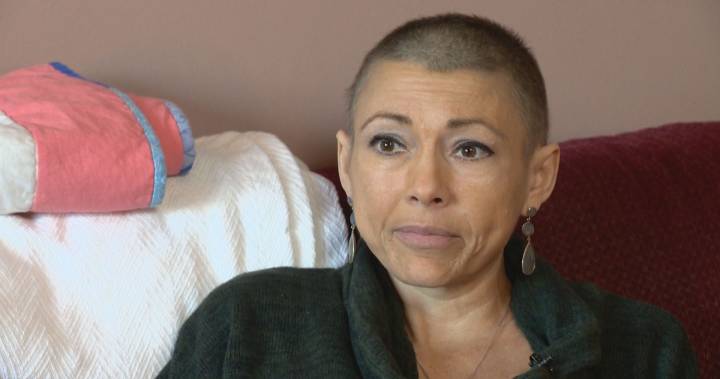 Colleen Tkachuk is facing difficult odds. She has Stage 4 recurrent ovarian cancer. The diagnosis is frightening but the 48-year-old says the worst part is feeling like she’s facing the disease alone.

Last October, there were two full-time gynecological oncologists based in Tkachuk’s hometown of Saskatoon. By the end of the 2018, there was none.

Instead, patients are left to rely on locum doctors who fly in for a few weeks at a time. In nearby Regina, the situation is not much better. The city is losing one of its two specialists this June.

“When you go from four specialists (in Saskatchewan) to one, it’s a pretty scary thing for patients,” said Stephanie Gosselin, Saskatchewan and Manitoba regional director for Ovarian Cancer Canada.

Gynecological oncologists are highly trained specialists who treat cervical, uterine, vulvar and ovarian cancer. Ovarian cancer is the fifth-leading cause of cancer death for women in Canada.  According to Ovarian Cancer Canada, 1,800 women will die of the disease each year.

According to the Society of Gynecologic Oncologists of Canada (SGOC), the city of Kingston, Ont. is also struggling to recruit and retain specialists, especially as Canada deals with a national shortage brought on by a perfect storm of medical leaves, retirements and international competition.

“If you are in a small specialty, your on-call requirements are going to be significant,”  Dr. James Bentley said. He added in some cancer centers, doctors are sharing on-call loads with just one or two other physicians.

“Year after year, that is going to wear on people.”

For patients like Tkachuk, seeing her specialist struggle under such a heavy workload was worrisome.

“You can see how tired they are.

“When someone gets burned out and tired, they’re not enjoying what they’re doing anymore. Maybe they don’t want to help you anymore? You don’t know.”

That’s why Bentley says the SGOC released a set of Pan-Canadian guidelines for Gynecologic Oncology last year. Produced in partnership with the Canadian partnership against cancer, the document calls for every Canadian cancer centre to staff a minimum of three specialists.

WATCH BELOW: Dr. Tim Holland addresses the doctor shortage in Nova Scotia and the impact it’s having on a refugee health clinic in Halifax (Jan. 10, 2019)

The SGOC is currently working to speak with provincial ministers of health across the country to discuss ways to implement the new standards.

For ovarian cancer patients in Quebec, there is another problem limiting access to specialized care: geography.

Most of the province’s gynecologic oncologists are based in Montreal, Quebec City and Sherbrooke, meaning women in northern and eastern Quebec must travel significant distances for appointments.

“We know that not all women are opting to travel these distances and are not being diagnosed and treated by gynecological oncologists and we also know that this is associated with poorer outcomes,” said Jennifer Laliberté, Quebec Regional Director at Ovarian Cancer Canada.

Back in Saskatchewan, an international recruitment campaign is well underway.

Tkachuk says she’s hopeful that a permanent doctor can be found soon.

“When you know that they’re there with you for this long journey, it takes away the fear because no one wants to go through it alone.”

WATCH BELOW: Seventy-five women are diagnosed with ovarian cancer in Saskatchewan each year, and 55 lose their lives. But does that outcome need be so severe? Ovarian Cancer Canada thinks not and it is hopeful a new drug can reduce that number. David Baxter has more. (Jul 27, 2017) 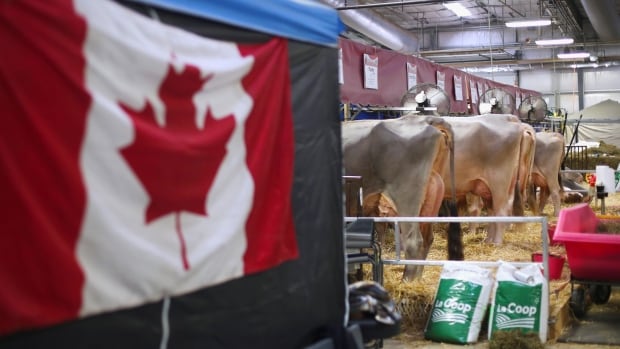 With major concessions from Canada on dairy, some Ontario critics say they’re concerned about what NAFTA’s proposed replacement means for the industry.

The provisional deal known as the United States-Mexico-Canada Agreement (USMCA) has plunged some dairy farmers into uncertainty, with some now concerned that they might not be able to survive.

The new deal would give U.S. farmers greater access to Canada’s dairy industry, worth about 3.6 per cent of Canada’s current dairy market, according to the Dairy Farmers of Canada.

Dairy farmer Vicki Cork has heard from Dairy Farmers of Ontario that the number could even be as high as 3.9 per cent and says the higher figure gets her worried.

« The bigger the number, the worse it’s going to be, so we’re just sort of [bracing] for the worst, » she told CBC News Saturday at the Norfolk County Fair in Simcoe, Ont. — one of the largest agricultural fairs in the province.

« We’re a sixth-generation dairy farm, and we’re probably not going to survive this, so I guess it just sucks to be us. »

Dairy farmer Vicki Cork speaks to CBC about the impact of the USMCA trade deal. 1:36

Cork claims that she hasn’t received any communication on what compensation may look like outside of a « pretty vague » email she got from the Dairy Farmers of Ontario.

« I look after the books for the farm, so I’m terrified, » she said. « Until they actually say something official, we really have no idea what the compensation will look like. »

Ontario’s Minister of Agriculture Ernie Hardeman told CBC News that consultations will be made with the province’s agriculture community to determine the cost associated with the new deal. He said he plans to ensure the federal government foots the bill. 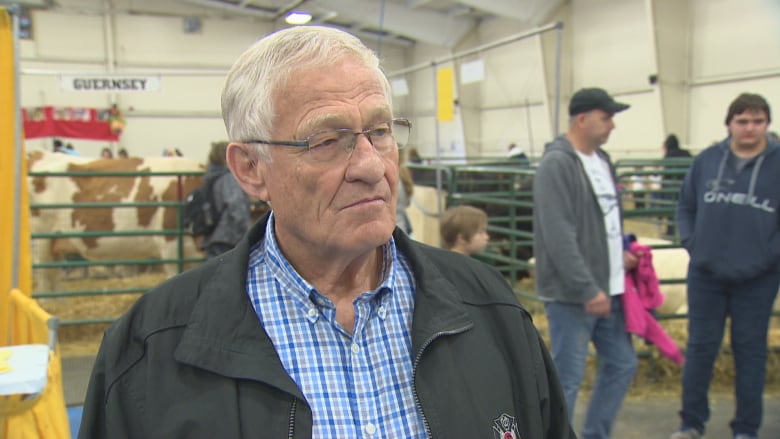 Ontario’s Minister of Agriculture Ernie Hardeman says consultations will be made with the province’s agriculture community to determine the cost associated with the new deal. (Keith Burgess/CBC)

« It is quite obvious that opening up the market to the American market is going to hurt our producers, » he said at the Norfolk County Fair. « They made the deal, they should pay for the penalty that is caused by the deal. »

Some critics say the deal also erodes the supply management system, which puts quotas on the amount of milk farmers are allowed to produce. The quotos prevent overproduction that would otherwise hurt prices and farm incomes.

Cork says Canada’s supply management system has been successful and the envy of countries around the world.

« The quota system was put in place because the government told us to manage our own system and we did and we were successful. We were too successful, » she added. « Other countries wanted into that. They wanted access to it, and our government sold us out. »

Cork says she has no animosity toward other dairy farmers or American dairy farmers, but rather the government. 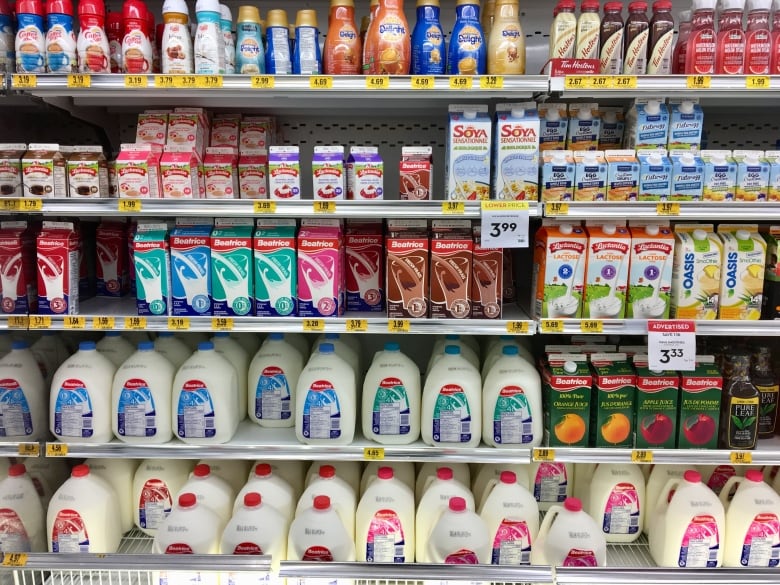 The deal would also eliminate Class 7, which essentially created a discounted price on Canadian-produced milk ingredients, so they could compete with similar products exported into Canada from the United States. The pricing system was introduced in March last year, which made the American equivalents uncompetitive.

Now with the new trade deal in motion, Cork is asking that Canadians specifically look for products that are made in Canada to help farmers at home.

« I would really hope that the general public would just really support your Canadian farmers, » she said. « You might pay a few cents more, but it was grown here. It was grown ethically and safely, and you’re supporting your neighbour. »