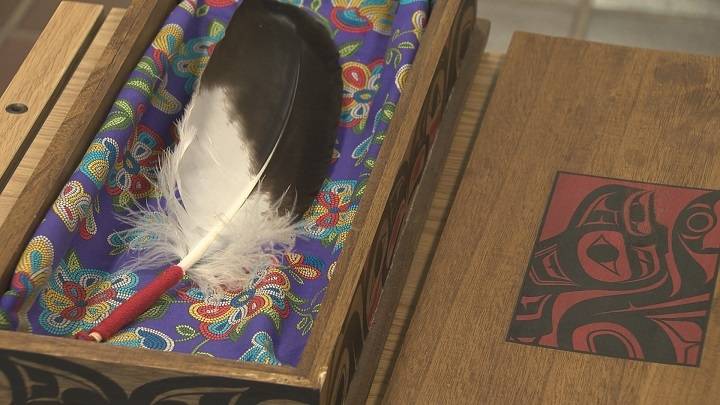 It was a day of firsts at the Lethbridge Courthouse. Members of the First Nations community gathered to bring a part of their culture to the judicial process in southern Alberta.

“Some people may see it as something small, but it’s actually a big thing,” said Tony Delaney with the Kainai Peacemaking Program. “To be able to smudge here in the courthouse, it’s never happened and for people to witness that and participate in that as well.”

The smudge was part of a ceremony, blessing an eagle feather gifted by Travis Plaited Hair to both the Court of Queen’s Bench and the Provincial Court of Alberta in Lethbridge.

“It will replace a bible, a Koran, the old testament, whatever someone may use as an instrument to bind their testimony to tell the truth,” said Justice Jim Langston with the Court of Queen’s Bench.

There are other areas in Canada that have an eagle feather in their courthouses, but this is a first for Alberta’s south region.

“It’s long overdue and there is much that we can learn from their culture and their practices, and it was an opportunity among many others, that we are trying to begin where their culture can be brought in our courthouse, our justice system in a way that is respectful,” added assistant chief judge with the Provincial Court of Alberta.

“My dream would be to have a feather like that in every courthouse. This one, we may have to move around but this ceremony was a ceremony to introduce the eagle feather into the southern region, and so once we have acquired enough blessed feathers, my hope is that we would have it in every courthouse.”

Organizers called the feather another step towards truth and reconciliation in southern Alberta.