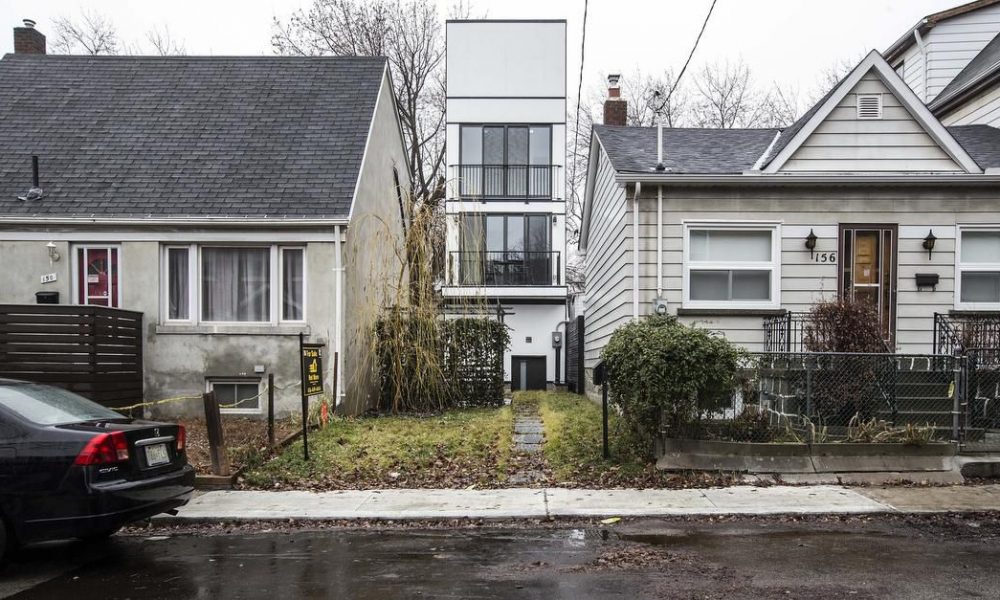 Sandwiched behind homes on either side, the tall, skinny house at 154 Hamilton St. is set back more than a dozen metres from the sidewalk.

It’s selling for $3 million but depending on who you talk to, the property near Dundas St. E. and Broadview Ave. is either a wonder of modern architecture well worth that amount, or an ugly, overpriced monstrosity.

The 1,300-square-foot house is four storeys tall, with floor-to-ceiling windows. A portion of the house is cantilevered — protruding and elevated from the ground. It was built after a protracted battle that pitted owners of the property against the local councillor and several nearby residents — including a next-door neighbour who had limbs from her elm tree cut off two years ago during the home’s construction.

Bitter feelings linger. “It’s a really sad story,” said Councillor Paula Fletcher (Ward 14, Toronto-Danforth). “Everyone has been in a state over this particular house.”

It’s a story that began with an infill house that was a tiny garage long ago, and was later turned into a small, one-bedroom cottage.

In 2012, the city’s committee of adjustment approved the “minor variance” sought by Toronto architect Michael Mantzoris, who then owned the home. In 2016, Mantzoris, with business partner Gordon Kipping, sold the property to Cyril Borovsky, who built the existing four-storey home, which recently went on the market.

For homeowners Linda Bourgeois and Linda Clowes, who both live in a house on Munro St., one block west of Hamilton, their concern has always been the height of the house.

Four storeys is not in keeping with the heights of the other homes in the area, the two argue.

“This sets a precedent. The next thing you’re going to see is an eight-storey house,” Clowes said in an interview at their home this week. She and Bourgeois have lived in their home for 22 years and were part of the unsuccessful fight to stop the construction of 154 Hamilton years ago.

Clowes and Bourgeois were among a group of alarmed residents who came together after Mantzoris applied to build a four-storey home on the tiny 15-by-86-foot lot.

Mantzoris purchased the cottage at 154 Hamilton in 2011 for $295,000 and later applied to rebuild on the lot. He and Kipping, a New York-based architect, designed a new house, but didn’t build it.

“We were interested in developing some interesting architecture,” Mantzoris said in a recent interview.

Mantzoris said he had a “more elegant design” in mind than what was eventually built. He said he wanted a house that would “disappear” into the fabric of the street more, and certainly not a white structure.

The zoning bylaw allowed for a building four storeys tall, Mantzoris added, arguing the roof peaks for some Victorian houses on Hamilton St. matched the four storeys he and his partner envisioned.

According to property records, Kipping and Mantzoris sold the property for $530,000 in 2016 to Borovsky, who constructed the existing house.

Borovsky didn’t reply to repeated requests from the Star for comment.

The house landed in controversy again in 2016, when Borovsky cut off a large limb of a neighbour’s 100-year-old silver maple, which hung over a fence onto Borovsky’s property.

According to a CBC report at the time, Borovsky said that overhanging limbs impeded the construction of his home.

But the city had turned down his bid to trim the limbs.

After it was cut, the city issued a stop-work order, but Borovsky argued he had a building permit that allowed him to override city rules on the protection of trees, the CBC report said.

The listing refers to the home as “truly unique” and a “modern marvel with four levels of functional minimalism.”

But John Richards, a resident on Munro St., called the house a “foolish design” built in the wrong place, and scoffed at the $3-million price.

“It looks like something that belongs in a trailer park,” says Richards, an architectural design specialist who does lighting designs for properties in Southeast Asia, the U.S. and Canada.

He believes the homeowners could have applied for a variance and done concrete foundation work that would have allowed the home to be built closer to the curb, preserving the backyard.

“The backyards around here are secret assets,” Richards says.

“It wasn’t possible due to their roof eaves encroaching on either side of the property, and structurally we would be limited by the integrity of (the neighbours’) foundation walls and footings.

“Don’t get me wrong, we had investigated building closer to the curb, but after reviewing a few different design proposals with the senior (city of Toronto) planner for the area, we all agreed to develop the scheme at the rear of the lot, replacing the existing foundation and going up,” Mantzoris says.

Hans Ibelings, lecturer at the Daniels faculty of architecture, landscape and design at the University of Toronto, said taller homes are needed to “densify the city,” but in architectural terms, 154 Hamilton is “totally bland.”

“I have looked up images of the interior, and that confirms that this is not exactly a masterpiece of domestic architecture,” he said.

“Given the pressure on the housing market, it would be great if infills would lead to affordable projects. I don’t think there is a real shortage of $3-million homes,” he added.

Fletcher points to other houses in her ward that are built on tiny lots but fit with the other homes nearby, unlike 154 Hamilton, she argues.

“This one (on Hamilton) doesn’t fit, but others fit. It’s the difference between fitting and not fitting on these really small lots. Why do the others work and this one doesn’t?” 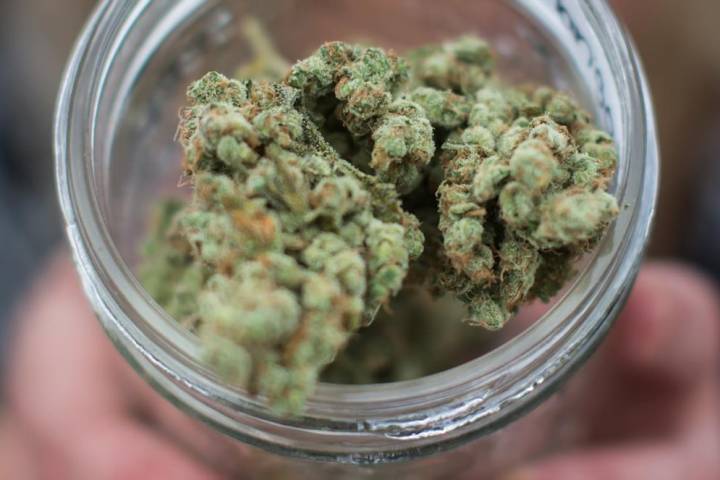 Montreal police officers will be allowed to smoke cannabis outside of working hours so long as they are “fit for duty” once legalization comes into effect on Oct. 17.

“If for example, one of your colleagues notices that they’re unfit for duty, you know because they seem impaired, they seem dizzy, there’s something wrong,” Insp. André Durocher said.

“That’s how we’re going to go about it.”

READ MORE: Montreal to follow provincial guidelines when it comes to smoking pot in public spaces

The announcement, which was made on Wednesday as the city unveiled its marijuana action plan, is a stark contrast to other policies taken by police forces across Canada.

In Toronto, police officers will be banned from consuming recreational marijuana within 28 days of reporting for duty. The RCMP has adopted a similar tone, barring Mounties from using cannabis one month before any shift.

The rule is stricter in Edmonton, where police officers will not be allowed to consume, smoke or use cannabis at all when it becomes legal next week.

In Montreal, however, a zero-tolerance policy is not part of the city’s approach. Durocher said the “fit for duty” principle is what the police force currently enforces when it comes to the use of any substances — whether that is cannabis, alcohol or medication.

“It’s the same for anything else,” he said.

Durocher said the city’s marijuana plan was created “according to our culture, our organization and what we think is best,” and that it is the best way to ensure the “safety of our officers and of our population.”

The move comes exactly one week before recreational cannabis becomes legal across the country. Canadians over the age of 18 or 19, depending on the province, will be allowed to buy and possess marijuana.

In Quebec, however, the newly-elected Coalition Avenir Québec government has pledged to raise the age from 18 to 21. The move would mean the province would have the highest age requirement for cannabis across the country.

— With files from Gloria Henriquez, Amanda Connolly and The Canadian Press