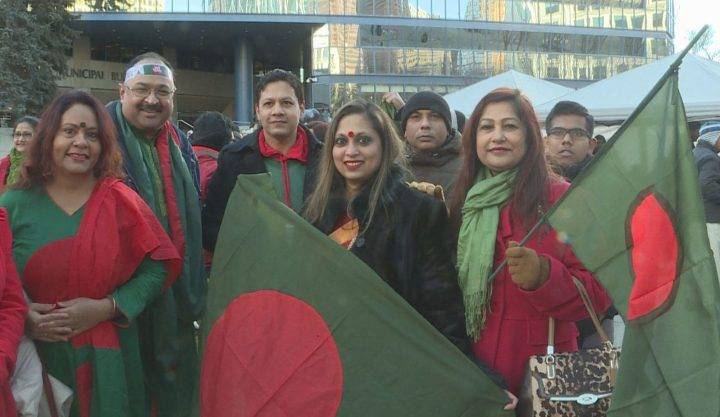 Over a hundred people in Calgary’s Bangladeshi community observed the 47th anniversary of their country’s independence war victory on Sunday.

The green flag with a red circle was raised outside city hall as people sang and gave speeches.

Dec. 16 marks a national holiday in Bangladesh that commemorates their victory over Pakistani forces during the Bangladesh Liberation War in 1971.

“We are recognizing all the people who fought for us and who sacrificed their lives for our independence,” she said. “We want to show our children and second generation this history, our heritage and our culture… They’re going to be proud as a Bangladeshi-Canadian.”

Akther said there are 10,000 people in Calgary’s Bangladeshi community, and it’s the first time they’ve raised a flag.

Matinul Yusuf was a Bangladeshi liberation fighter in 1971.

“This is the Victory Day,” he said. “Independence has been done Mar. 26, 1971. Nine months we fought against the Pakistan army [until their surrender in December].”

Mumtaz Uddin Ahmed worked in the Bangladesh Air Force during the war. He called Dec. 16 a day of great significance.

“It was a bloody war where we fought the Pakistanis and lost about three million people who sacrificed their lives,” Ahmed said.

Bangladesh has said Pakistani soldiers, aided by local collaborators, killed an estimated three million people, raped about 200,000 women and forced millions to flee their homes. Pakistan has disputed the allegations.

Ahmed said the Bangladesh Air Force was formed in September 1971 with three aircraft: a helicopter, a DC-3 Dakota airliner and a Twin Otter plane.

“Bombs were dropped by hand,” he said.

“The main fuel dams at Chittagong and Dhaka were destroyed by the Air Force with these three aircraft,” Ahmed added. “When the Pakistanis got absolutely frustrated, they attacked India on Dec. 2, and that was the time the Indians retaliated. One attack in Dhaka, air fuel was destroyed and the Pakistanis lost their morale.”

On Dec. 16, 93,000 Pakistani soldiers laid down their weapons and surrendered, he said.

– With a file from the Canadian Press