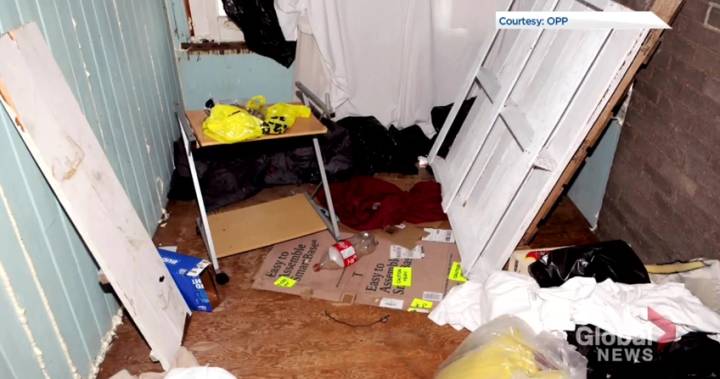 Forty-three victims of human trafficking were freed this month by police in Ontario.

The victims, mostly men from Mexico aged between 20 and 46, were rescued by officials following a lengthy investigation by Barrie Police and the Ontario Provincial Police.

The workers were allegedly made to live in squalid conditions in Barrie and Wasaga Beach, and were forced to work for a cleaning company.

“The commodity being bought and sold is people. Human trafficking is modern day slavery,” Barnum said.

“Human trafficking involves the recruitment, transportation and harbouring of persons for the purposes of exploitation, typically in the sex industry, or in this case forced labour. Exploitation is the key element of this offence.”

While human trafficking happens in nearly every country of the world, it often goes unreported.

Yvon Dandurand, a criminologist and professor at the University of the Fraser Valley in B.C., explained human trafficking often doesn’t get enough attention in Canada, and especially not the issue of labour exploitation.

Those being exploited over labour are usually forced to perform tasks outside of their mandate and are underpaid. Many of them work on farms or mines in areas were there is not a lot of police presence, Dandurand explained.

“The victimization goes on for sometimes years” before it is caught, Dandurand noted.

“Human trafficking in general does not come to the attention of police, because people don’t report it.

“This is the kind of crime that only comes to the surface when the police looks for it proactively,” he said, pointing to the Barrie investigation as an example.

Dandurand added that the majority of reported human trafficking cases in Canada are from Ontario.

“Does that tell us that human trafficking doesn’t happen elsewhere? It tells us that in Ontario, law enforcement has devoted more attention and more resources to the investigation of those cases,” he said.

According to Statistics Canada, there were 340 police-reported cases of human trafficking in Canada in 2016, where it was also the most serious violation.

StatCan explained the number has been steadily rising since the agency began collecting data.

READ MORE: Woman tells N.S. court she wanted to die after being lured into prostitution

“Between 2009 and 2016, there were a total of 1,220 police-reported incidents of human trafficking where it was the
most serious violation,” the report, titled, “Trafficking in persons in Canada,” explained.

“The number and rate of human trafficking incidents have steadily increased since 2010.”

In Canada, most cases of human trafficking involve other offences, such as assault or sexual exploitation.

Nearly three in 10 victims experienced some sort of physical injury. Many also suffer from emotional and psychological trauma, the StatCan report noted.

WATCH: Human trafficking victim hopes her story will save others

The operations are often so hidden that even the companies who employ these workers claim they didn’t have knowledge of the exploitation.

That seemed to be the case in Barrie, where the company that employed the Mexican workers said it wasn’t aware of their plight.

In a news release Tuesday, Living Water Resorts explained it hired the workers through a housekeeping company and paid them $21 per hour. It said they were “unaware of any alleged abuse.”

“In light of the allegations that have come forward and police reports of the living conditions and treatment of these contract workers, the Resort has cut ties with the third party contractor immediately,” the release read.

Difficult to prove in court

Beyond that, Dandurand explained human trafficking cases that make into court rarely result in convictions.

According to the Integrated Criminal Court Survey, between 2008 and 2016 there were 84 completed adult criminal court cases in Canada where human trafficking was the most serious offence.

Sixty per cent of those cases were stayed or withdrawn. One-third resulted in a guilty finding, and the accused was acquitted in five cases.

“It’s a very difficult crime to prove. Sometimes you get the cooperation of victims, but not always,” Dandurand said.

“Victims of human trafficking are not always the most persuasive witnesses. They are traumatized and fear reprisal.”