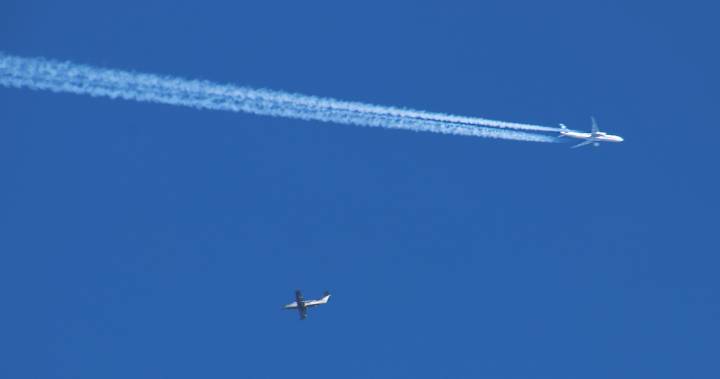 For weeks, Kingston residents noticed a “mystery plane” flying around over their homes — but no one could quite figure out what it was up to.

There had been hundreds of plane sightings since Jan. 4, and there were a few guesses as to what it could be.

The plane was flying around at night; one aviation enthusiast in the city heard a buzz over his home that lasted for about a week.

Royal Military College Prof. Christian Leuprecht surmised that the plane belonged to a “government entity.” Plane tracker Neil Aird suggested it was an RCMP plane, based on a flight path.

The RCMP at the time only offered a statement saying its “primary concern is the safety and security of Canadians. We have multiple aircraft that support our mandate in Ontario and elsewhere in the country. To maintain the integrity of our investigations and operations, the location of our aircraft is not disclosed.”

On Thursday, Kingstonians received some clarity as to the plane’s origin. It was related to two raids executed in the city that resulted in the arrests of two people linked to a national security investigation, sources told Global News.

The raids happened at two homes: one on Kingsdale Avenue, the other at 430 MacDonnell Street.

One of the two people arrested was a minor, sources said.

Speaking to Global News Radio’s Charles Adler on Thursday, Leuprecht, an expert in defence and security, said he was not sure this operation was “run in an optimal fashion for a national security investigation.”

“When the RCMP is flying a plane here on a regular basis at night, it’s a good tip that something may be up,” he said.

The plane, Leuprecht said, had been “raising eyebrows” within Kingston for weeks “because it seems to show up in the middle of the night, usually after midnight, then it circles for several hours on end, so it didn’t seem to be moving particularly far.

“And if you’re familiar with the ways plane traffic works, there was concern this could pose a security issue.”

Since 9/11, Leuprecht said, there isn’t much that happens in the sky that authorities aren’t aware of.

Any plane flying at this one’s height — estimated at 6,000 feet — would have had to file a flight plan with Transport Canada, he said.

“Nobody just flying a private plane would be able to get permission from Transport Canada to fly their plane with no lights on in the middle of the night, in relatively close proximity to our own little airport here, if this wasn’t a government priority,” Leuprecht said.

“I think people had already drawn the inference that there was government, and likely law enforcement, involvement and investigation under way.”

“The Government of Canada has no greater responsibility than to keep its citizens safe,” he said.

“Earlier today, the RCMP and other police partners took action in Kingston, Ont., based on credible information, to ensure public safety. Any comments on operational details will be made at the appropriate time by the RCMP.” 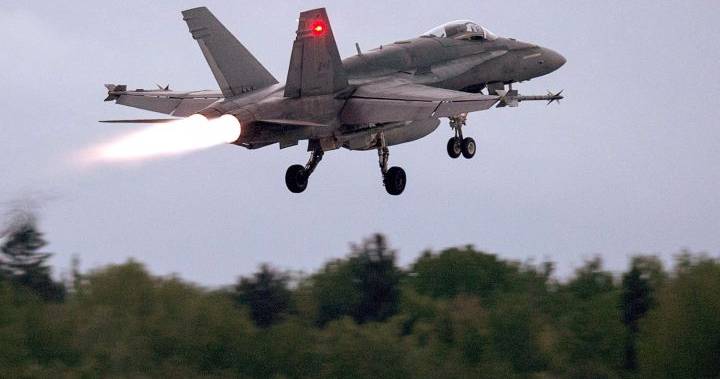 A fighter pilot has been fined $2,000 after pleading guilty at a court martial to flying his CF-18 jet too low during a training mission in which his wingman died in a crash.

Capt. Christopher Mileusnic was the leader of a two-aircraft formation on Nov. 28, 2016, that was practising dropping bombs on targets near the Cold Lake weapons range in northeastern Alberta.

The rules for the low altitude mission required that the aircraft have a working heads-up-display — a device that shows flight information that the pilot can read by looking forward at the canopy.

According to the agreed statement of facts, the pilots were under pressure to drop all of their bombs before returning to base.

Despite the problem he continued making bomb runs with his wingman, Capt. Thomas McQueen.

“During the last target run, Capt. McQueen flew the target run-in at 450 feet AGL with Capt. Mileusnic in a three-mile trail position. While conducting the safe escape manoeuvre, Capt. McQueen inadvertently flew into terrain and died instantly,” reads the statement of facts.

“The actions of Capt. Mileusnic during the Swift flight are in no way alleged to have contributed to the crash and death of Capt. McQueen.”

At Monday’s court martial, Mileusnic pleaded guilty to flying an aircraft at a height less than the minimum height authorized in the circumstances.

He was also charged with negligently performing a military duty imposed on him and negligently committing an act deemed dangerous to life.

A military spokesman said the prosecutor decided not to proceed with the other charges following the guilty plea on the first charge.

The court martial judge then accepted a joint submission by the prosecutor and defence and sentenced Mileusnic to the fine.

An accident report released last April into the fatal crash suggested that McQueen was distracted and trying to see where a practice bomb had landed just before his CF-18 hit the ground.

The report said flight rules have since been changed to raise the acceptable altitude for such training to more than 300 metres and to underline safety standards for low flying.

“The low-level environment is an inherently hazardous and unforgiving region where only a few seconds of distraction can mean the difference between life and death,” the report said.

A military publication says Mileusnic is an experienced pilot who has taken part in missions intercepting Russian Bear aircraft over the Arctic. He also once served with the Royal Air Force. 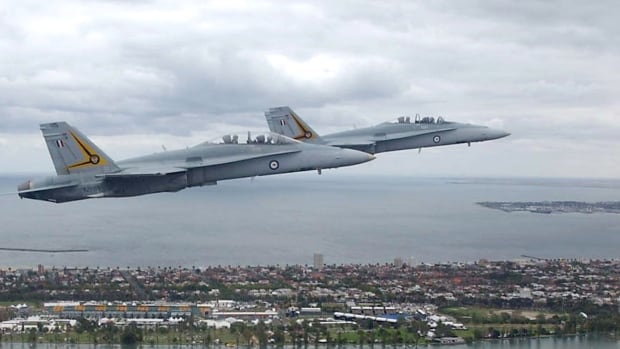 The Canadian government has completed a deal to purchase Australia’s old F-18 fighter jets and the first of the 25 used jets should arrive this spring, the Department of National Defence confirms.

The Trudeau government announced back in 2017 that it would buy 18 used Australian F-18s as an interim measure to bolster the air force until the entire Canadian fleet of CF-18s is replaced, beginning in the mid-2020s.

The other seven Australian jets it bought will be used for testing and spare parts.

The Australians had to get permission from the U.S. to sell the planes because they were manufactured in the States, but officials with Defence said the deal between Canada and Australia was finalized in November.

News of the official agreement was first reported by the National Post Thursday.

Pat Finn, in charge of the materiel branch at National Defence, told CBC News back in February that he didn’t expect the first wave of jets to arrive until summer 2019.

Officials with DND now say the first two planes will arrive this spring.

The department said the first arrivals could be operational by the summer, while a second group of planes could arrive later this year.

The Australian aircraft cost about $90 million, but the total cost of the acquisition project (including upgrades, salaries and a contingency plan) will be closer to $500 million.

When Defence Minister Harjit Sajjan announced plans to buy Australia’s used jets more than a year ago, he also launched a competition to replace the CF-18s, which were originally purchased in the 1980s but have received significant upgrades in the decades since.

Canada had wanted to buy brand new Boeing Super Hornets, the more advanced version of the FA-18 and CF-18, but that proposal went down in flames when the manufacturer, Chicago-based Boeing, filed a trade complaint against Canadian aerospace giant Bombardier.

Sajjan has said the used jets are needed to address Canada’s « urgent capability gap » and that Canada doesn’t have enough planes to meet its NATO and North American Aerospace Defence Command (Norad) commitments at the same time. 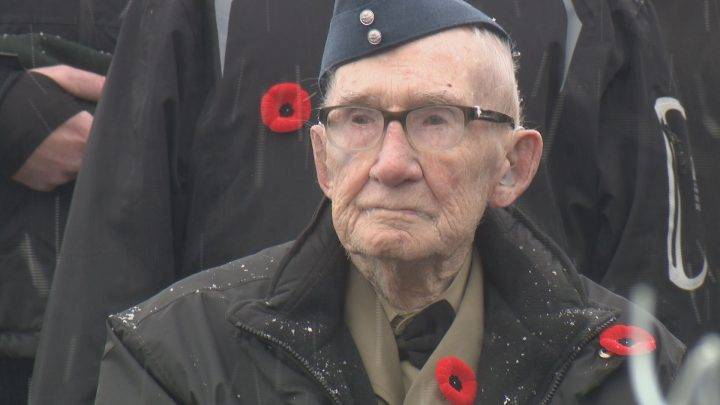 Jack Hilton is well aware he has beat the odds.

As a Typhoon fighter pilot, Hilton did more than 100 operations flights across Europe during the Second World War, including D-Day.

“In 28 days, I flew 28 times and 28 times you take off and land, you’re pushing your luck,” Hilton recalled on Sunday.

He said every time he took to the air, a quarter of men who went up, didn’t return.

“I went over to France with 28 pilots,” Hilton said of the mission overall. “Eight of us came home to Canada. I’ve seen things that humans shouldn’t see.”

Hilton was a guest at the Hangar Flight Museum’s Remembrance Day ceremony, sharing his personal stories despite the painful details. During the war, he survived being shot down, only to be sent up the next day. He said it became normal to see roommates drop from the sky.

“It’s upsetting,” Hilton said. “You can’t let it stop you because you’ve got a job to do. You get a new guy and he flies along with you and he disappears in flames and smoke but you can’t do anything about it.”

To help deal with the horrors he witnessed, Hilton wrote a book about his experiences called “The Saga of a Canadian Typhoon Fighter Pilot.”

In it, he recalls being offered his last rites by a priest who witnessed his plane crash.

Jack Hilton wrote a book about his experiences called “The Saga of a Canadian Typhoon Fighter Pilot.”

Despite being surrounded by thankful admirers at the Remembrance Day ceremony, Hilton remains humble.

“It’s very touching and they treat me so well,” he said. “They say you’re a hero but I said, ‘No, I’m not a hero, I’m just a survivor.’ Other people are heroes who died.

“You are flying with a man beside you who is your roommate probably and all of a sudden, one man will explode and he would disappear. You go back and you pack up his gear and send it home.”

He contemplated the different world young people are living in now compared to when he joined the air force.

“Twenty-year-olds now are living with mom and dad, and playing video games. We were flying the stupid airplanes,” Hilton said.

Above all else, he hopes today’s youth will never have to experience what he and fellow veterans did.