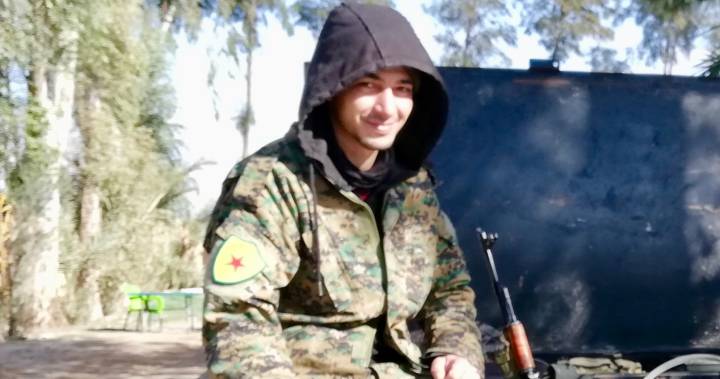 Around the last pocket of Syria still under ISIS control, airstrikes are constant, the buildings are badly damaged and there are mines everywhere, planted by retreating fighters.

“There’s been a lot of destruction,” said Kyle Town, a Canadian with the Kurdish-led Syrian Democratic Forces who was recently at the frontlines at Deir ez-Zor.

A 30-year-old sheet metal worker from Thunder Bay, Ont., Town is one of a handful of international volunteers helping free the last patches of Syria from ISIS.

He arrived last summer as ISIS, which once controlled a vast swath of Iraq and Syria, was being corralled near the Iraqi border by U.S.-backed SDF fighters.

Six months later, the so-called ISIS caliphate is down to about six square kilometres, and hundreds of foreign terrorist fighters — among them Canadians — have been captured.

Though cornered, ISIS continues to fight.

“They attacked our positions a couple of times,” Town said.

ISIS fighters are using truck-mounted guns and drones, both to find targets for mortars and to drop bombs, but their deadliest weapons are explosive booby-traps, he said.

Town suspects that hundreds of ISIS fighters remain around Deir ez-Zor but he also believes many have escaped. “I think they’ve managed to smuggle a lot of their fighters out,” he said.

Those remaining are believed to include foreign fighters and hardcore ISIS members with no intention of surrendering.

He wasn’t sure how much longer the fight to retake the ISIS-held areas would continue. “It could be anywhere from a couple of weeks to a few months. It’s hard to say.”

This map shows the Kurdish presence in Syria.

A longstanding interest in radical movements led Town to the Kurds. As they appeared in news reports about the conflict, he read about their plight as a beleaguered minority spread across Turkey, Iran, Iraq and Syria.

Once he had saved enough for the journey, he flew to Sulaymaniyah, Iraq, and crossed the border into northeast Syria, which is under Kurdish control. “I didn’t have any military background or anything like that,” he said.

His family in Ontario confirmed to Global News that he was in Syria with the Kurdish forces. His mother Jillian Town said she and her husband Craig Town, a former police officer shot in the line of duty in 1991, supported his decision.

“Craig and I both are really proud of Kyle and the courage that he’s shown to stand up in the way that he has to defend his beliefs,” she said.

His grandfather, who traces his Armenian roots to Turkey and Iraq, also confirmed Town was in Syria.

“They were a little bit worried,” Town said of his family. “But they’ve always known how I think about things and they trust me and they were supportive.”

Upon arriving in Syria, Town was trained by the YPG, or People’s Protection Units, which is part of the SDF alliance. It was six weeks of military instruction, history lessons and an introduction to the ideology of the Kurdish armed groups.

That doctrine is based on the ideas of Abdullah Ocalan, the founder of the Kurdistan Workers Party, or PKK, who envisioned a leftist Kurdish state. Ocalan has been imprisoned in Turkey since 1999.

Town said he admired the grassroots form of democracy the Kurdish self-administration was building in the hope of being recognized as part of a decentralised Syrian federation, as well as the leading role of women in politics and the military.

“There are a lot of lessons that people around the world can learn from, especially in the West,” he said. “How things are working here is significantly different.”

But the Kurds are at a critical moment. ISIS has pivoted to a guerilla-style campaign and there is the looming threat of a Turkish invasion and confrontation with Syrian regime forces.

“It seems pretty disorganized,” he said, adding U.S. troops were learning more from news reports than official channels. “They really don’t know how soon or if they’re going to be completely withdrawn.”

Town’s presence on the Deir ez-Zor front means Canadians were on both sides of the battle. On Jan. 13, the SDF captured an ISIS fighter who identified himself as an Ethiopian-Canadian. The former Toronto resident is believed to have narrated ISIS execution videos.

About two dozen Canadians have fought with the YPG and the YPJ, the Women’s Protection Units.

John Gallagher, a former member of the Princess Patricia’s Canadian Light Infantry, was killed in November 2015. Another Canadian, Nazzareno Tassone, died in December 2016. Their photos are featured on a billboard near the main border crossing into Syria’s Kurdish-controlled region, known as Rojava.

The United Kingdom and Denmark have arrested volunteer fighters who have returned home after serving with Kurdish forces, but that has not happened in Canada, although many have had visits from the RCMP and Canadian Security Intelligence Service.

“I’m hoping I won’t have any problems like that coming back,” Town said.

“But I suppose I’ll find out.”