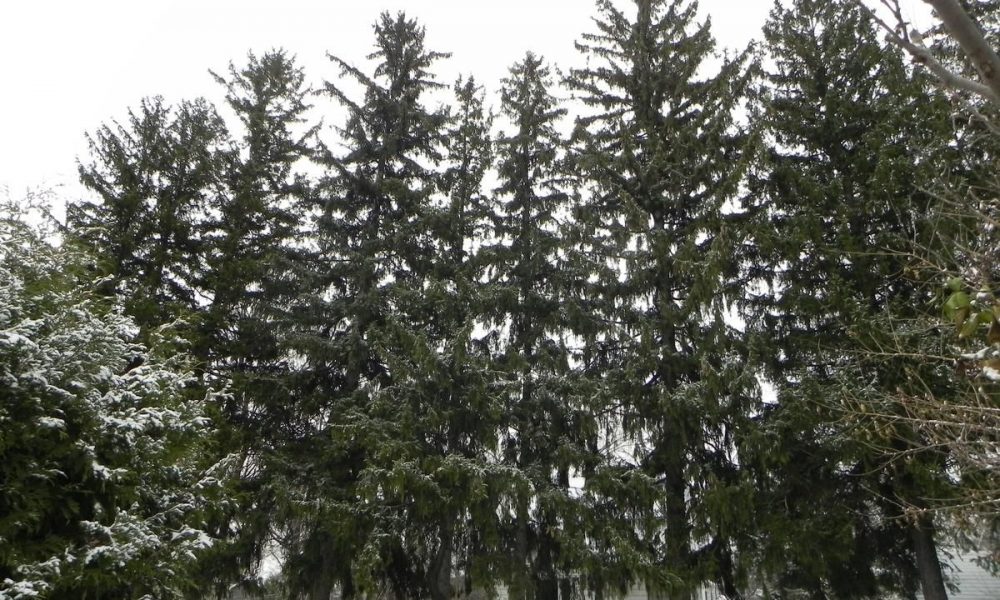 Tree of the Week showcases some of the biggest and most beautiful trees in the GTA, as told to Megan Ogilvie. Here, Sheila White tells us about the eight Norway spruce trees that have been standing tall for more than a century in Scarborough.

These eight Norway spruce trees were planted as a windbreak for a pioneer farmhouse that was built in 1888. This property, located on Murray Ave. in the Agincourt area of Scarborough, was once part of the Harris Farm, which my parents purchased in 1951.

When Toronto city council amended the city’s tree protection bylaw in December 2015, these towering trees, more than a century old, lost all previous protection they had enjoyed under the old bylaw.

In 2017, when our family decided to sell the property, I took the extraordinary measure of seeking a heritage designation on the property to stave off speculators and prevent any future owner from cutting down the trees, which are a spectacular feature of the neighbourhood. When my mother died in 2016, one of her last wishes was for the house and trees to always remain standing.

Given the historical significance of the pioneer farmhouse — and my parents’ association with the property — council approved the heritage designation in October 2017.

My father was Bill White (1915-1981), a teacher, musician and social justice activist who, in 1949, was the first Black Canadian to run for federal office in Canada. As a musician, my father was best known for his ability to get all manners of people singing together in four-part harmony in a matter of 10 to 15 minutes, which made him a sought-after motivational speaker. He received the Order of Canada in 1970 for his civic service and humanitarian work.

My mother, Vivian (1925-2016), was an environmentalist who advocated for composting and recycling before there were names for those types of activities. Many years ago, she stood in front of city workers to prevent a stand of trees from being chopped down in a nearby Scarborough park. Because of her efforts those trees remained and the surrounding area was turned into a wildflower garden. She received a Queen’s Golden Jubilee Medal in 2002 for her work as a community volunteer and environmental activist.

The old photo of our trees is from 1959 and the branches of the trees are so weighted down with snow; I remember they made fabulous snow forts for me and my siblings to play in. I have wonderful winter memories of skating around the farmhouse’s circular driveway, which circles through this stand of trees.

These eight Norway spruce trees represent the last piece of farmland in this vicinity and are emblematic of when this community was surrounded by trees and wilderness and majesty.

I have a storehouse of memories of these trees and the contentment and satisfaction of knowing the property is protected, which was my mission. The new owners take possession in February 2019 but I won’t have to say goodbye to these trees. I live just up the street and so I can blow them a kiss from the road.