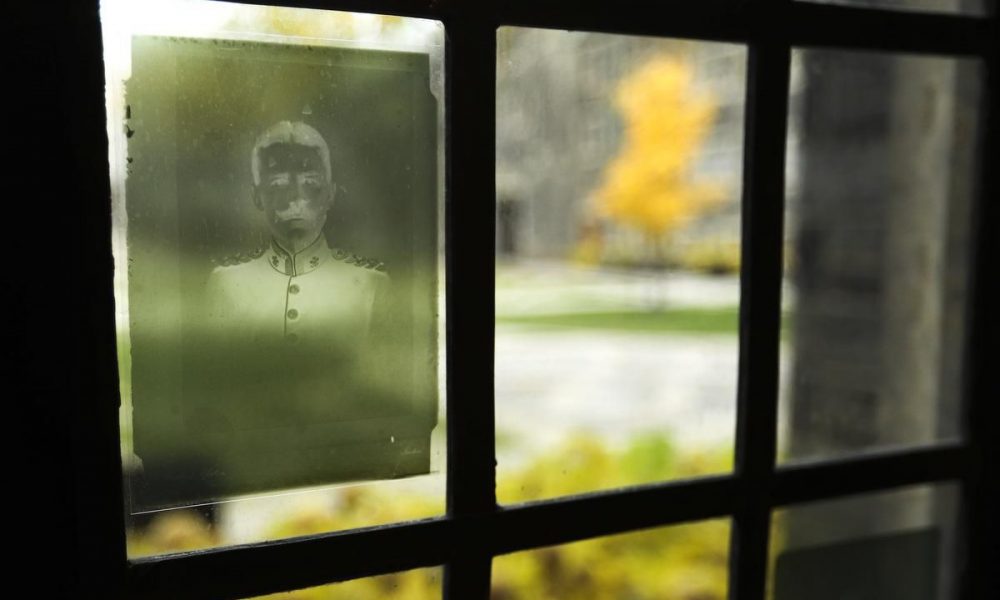 The men and women in the windows at Trinity College have a ghostly presence, rendered in the black and silvery white of a glass-plate negative, like an X-ray.

They were students of another time and place, united by death and service in the First World War. Their Trinity College was located in what is now Trinity Bellwoods park, and had federated with the University of Toronto in 1904. Students didn’t move into the current location until 1925.

In 1922, two Trinity professors wrote a book about the 543 students and alumni who had served in the conflict. They wrote to the survivors, and families of the dead, asking for photos. The War Memorial Volume of Trinity College was a “labour of love,” Trinity archivist Sylvia Lassam says.

The professors made copies of each photo and kept the glass-plate negatives. About a year ago, Lassam came across the photos in boxes marked “heavy.”

To honour the centenary of the Armistice, Lassam had 27 of the photos — each one slightly bigger than a smartphone — developed, keeping the negative exposure. They were printed on clear backing, and Lassam and Sarah Kidd, the communications co-ordinator at the college, stuck them on the paned-glass windows that look to the quad. The details of their faces only sharpen when you look at them a certain way.

“He looks so young,” Lassam says as she gazes at Henry Thomson, killed at Passchendaele at 23. “Like a kid brother.”

Jeffrey Filder Smith grew up in Rosedale. He went to Upper Canada College and later studied in the Faculty of Arts, 1903-05. While the Globe said he worked at a rubber manufacturer’s head office before the war, he listed his occupation as “gentleman” when he signed up in 1916. He was 31, and took an officer’s course in England before he arrived in France.

He was hurt at Vimy Ridge but Lt. Smith was back in action 10 days later. He went missing at the end of June 1917. His battalion, the 13th, Royal Highlanders of Canada, had dug a fake trench and set up “dummy” soldiers which they controlled with string. At the appointed hour, the battalion history notes, they began moving the fake soldiers to trick the Germans into thinking an attack was imminent. The Germans shelled the area — but the battalion noticed the Germans were shelling their own line, too. The Canadians sent out a patrol that night to see if the Germans had abandoned the area. Lt. Smith and eight other men went over the top, through the barbed wire. It was a trap. The Germans threw a bomb at them and opened fire with a machine gun. Smith yelled at his men to retreat. He and another man stayed for covering fire.

They all made it back to the trench, but Smith and one other man did not. When another group came out closer to daybreak to find them, the other man was crawling back with a shattered leg. He said Smith had been hit by a bomb, but nobody could find him. According to the War Memorial Volume of Trinity College, he was taken prisoner and “died of wounds in German hands,” on June 29, 1917.

Leonora Gregory Allen studied at Trinity in 1906-07, and graduated from a nursing program in New York in 1910. She enlisted as a nursing sister in 1917. On the way to Europe, her passenger steamship turned military transport was torpedoed south of Ireland. The 29-year-old was picked up by a minesweeper, according to the Trinity war memorial book.

She made it to France in late 1917, but her hospital in St. Omer was bombed and shelled in the German spring advance of 1918, so she was moved to a new hospital at Étaples along France’s northern coast. “Everything bad that could happen to her happened to her,” Lassam says. Allen nursed at Allied hospitals in France and England after the Armistice and was back in Canada in the summer of 1919, where she became a supervisor and instructor at a hospital in Victoria. She married, and died in B.C. in 1957.

Reginald Prinsep Wilkins was a Trinity grad planning a law career. He couldn’t wait to get overseas, and signed up in 1915 with his good friend and Trinity alum Gordon Matheson. “Together they had hoped and waited for their chance to enter the battle and, officers of the same battalion, albeit in different companies, they almost fell together,” the college newspaper wrote.

As a student, Wilkins was in the glee club and never missed a Sunday morning choir appearance. He was editor-in-chief of the Trinity College Review. In France, he was a lieutenant with the 44th Batallion. His friend Matheson died in August 1918. In late September, Wilkins wrote to his father. The Canadians were advancing quickly through France, and were about to cross the Canal du Nord. “I feel that everything will turn out O.K., if the Almighty wills it,” he wrote.

According to the battalion war diary, early on Sept. 27, the men crossed the canal. Those leading the charge were pressed forward because of the eagerness of the entire crew, and many, including Wilkins, were killed or wounded as the Germans opened fire. The war diary notes the 26-year-old showed “magnificent leadership and self-sacrifice.” He was “believed to be buried” at the nearby Quarry Wood cemetery.

Richard Arthur Mitchell was studying in the Faculty of Arts, planning a future in ministry, when he enlisted in November 1914. The 20-year-old served with Canadian Army Medical Corps, and was plagued by rheumatism, stomach trouble and influenza, according to his service record.

In 1915 he wrote his will in an army recreation hut in England. He left his “regular army knife” to a friend in Toronto, $700 to his mother, and $300 to his uncle. According to his record, he was given three days’ field punishment for neglecting to obey a lawful command before Christmas 1915. That form of discipline often meant a soldier was tied to a fixed object for two hours a day in a crucifixion pose.

In 1916, Mitchell served with a machine-gun brigade on “water detail.” The military record keepers lost track of him that November, and when inquiries were made, the answer was a grim one. He had been killed in the Somme that September. According to the University of Toronto Honour Roll, Mitchell had gone to help two men who had been wounded in Courcelette, only to find they were already dead. As he hurried back to the trenches, a sniper shot him in. He is believed to be buried in nearby Adanac Military cemetery. The cemetery’s name is a reverse of Canada — it was created after the Armistice, when nearby Canadian graves were centralized in one location.