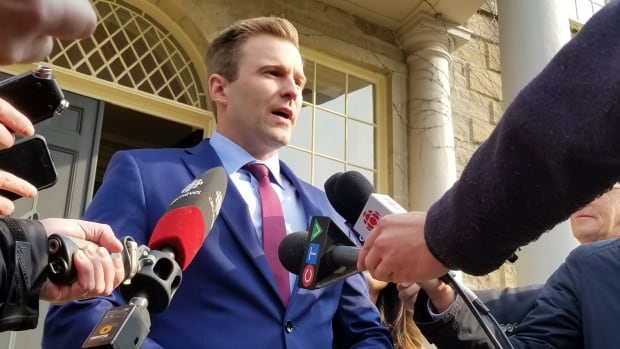 New Brunswick’s lieutenant-governor on Tuesday gave Brian Gallant permission to continue governing the province while the Liberals try to win the confidence of the legislature with fewer seats than his main opponent.

Gallant, who remains as premier, met with Lt.-Gov. Jocelyne Roy Vienneau the morning after the results of the provincial election suggested the Progressive Conservatives had eked out a minority government — 22 seats to the Liberals’ 21 — in a legislature requiring 25 for a majority.

Liberal leader Brian Gallant speaks to reporters outside Government House, before heading inside to ask the Lieutenant Governor to allow him to continue governing the province. <a href= »https://t.co/SZIMUFu327″>pic.twitter.com/SZIMUFu327</a>

In a media scrum, Gallant said he expected the New Brunswick Legislature to sit before Christmas, and if the Liberals lose confidence of the house, the government would resign.

« Nobody was given a mandate to form a government last night, » Gallant said. « The people elected 49 MLAs who must now try to work together. »

The Liberals find themselves in a difficult spot despite taking a larger piece of the popular vote in the province’s 39th general election. With all polls reporting, the Liberals received 37.8 per cent of the votes compared with the PC share of 31.9 per cent.

The PCs and the Liberals were in a dead heat, at 21 seats, when the final votes were counted. The last poll in Southwest Miramichi-Bay du Vin secured re-election for Tory Jake Stewart and the party’s 22nd seat.

« We recognize very much that New Brunswickers have sent a very strong message that they want things to change, » he said.

« They did not clearly define who they wanted to lead that change, that is clear. But we did get the plurality of votes. »

The province’s last minority government happened in 1920, when the United Farmers party held the balance of power.