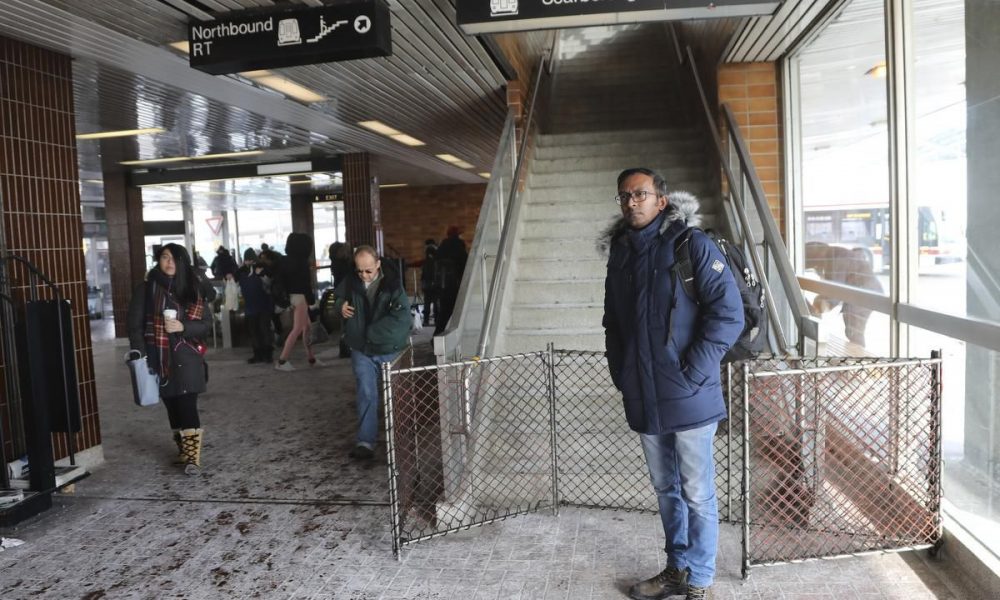 Kamran Karim arrived at Kennedy station and waited 30 minutes for the RT to arrive before realizing it was out of service — again.

“There is no sign. There is no notice,” he said, pointing to a gate barring access to the the stairs leading up to Scarborough’s elevated rail transit system, which was working on and off in the days after the snowstorm that bore down on the city Monday.

The record snowfall and the polar ice freeze that followed wreaked havoc on portions of Toronto’s transportation system, but in particular the aging and vulnerable elevated train service in Scarborough — dubbed the RT, the SRT, or more recently, Line 3 — that is supposed to connect residents of the suburb to the rest of the city to the southwest.

It was a grim reminder of what residents of Scarborough are in for as they wait for construction to begin on the Scarborough subway extension, a project that successive city, provincial, and federal governments have supported for years but whose ultimate design and completion date are uncertain.

Meanwhile the SRT is nearing the end of its useful life, raising the prospect that riders will be left taking the bus if a replacement isn’t built soon.

Residents of Scarborough are among the city’s super-commuters — spending an hour to two hours or more getting downtown to work or study — connecting by bus from their homes to the RT train service that brings them to Kennedy subway station, the eastern terminus of the Line 2 (Bloor-Danforth) subway. From there it’s a long ride west on the subway and then south into the heart of Toronto.

About 35,000 people use the SRT’s six stations on a typical weekday.

Among them is Jackie Abrokwa, 25, who said it takes her about two and a half hours to get to Humber College’s lakeshore campus from her home in east Scarborough. The shuttle buses meant to replace the RT in recent days were much slower, and added another 30 to 45 minutes to her commute, she said.

“As someone who has been taking the TTC for a very long time, I am kind of over it,” said Abrokwa.

The latest issues for the SRT started Monday, when the city was walloped with more than 20 centimetres of snow. The transit line went down at about 4 p.m., and though the TTC was able to get it up and running again for a few hours Wednesday, it was soon forced to shut it down again.

Regular service resumed Friday morning, but a mechanical problem forced one of the line’s six trains out of commission and the TTC had to supplement service with buses.

Although the SRT opened in 1985 and is nearing the end of its service life, TTC spokesperson Stuart Green said the problems in recent days were “not a product of age, rather extreme weather conditions.”

He said the issue was high winds blowing loose packed snow onto the SRT’s traction rail, which powers the train. Snow on the line causes the vehicles to lose power.

“As quickly as we’re clearing it, another section gets covered,” Green said.

While the line was shut down the agency deployed between 15 and 20 shuttle buses as a replacement to SRT service.

Green couldn’t say if the service outage was the longest SRT users have been forced to endure, but said about seven years ago there was also a winter shutdown that lasted several days.

Councillor Jennifer McKelvie, who represents the ward of Scarborough—Rouge Park and also sits on the TTC board, said transit users from her part of the city are “tired of being left out in the cold.”

McKelvie, who is serving her first term at city hall, said the solution is building the Scarborough subway extension and Eglinton East LRT as soon as possible. She blamed previous terms of council for not getting a replacement for the SRT built quickly enough.

“For years we’ve been debating, revisiting, voting, revoting on Scarborough transit. It’s time that we get on with building the transit that Scarborough deserves,” she said.

Although council has voted several times about the specifics of the Scarborough subway extension, the subway option has been the official plan for six years, since Rob Ford was mayor.

Council approved a three-stop Scarborough subway extension in 2013, opting for that project over a cheaper seven-stop light rail line that at the time would have been fully funded by the provincial government.

The three-stop subway was initially projected to cost about $3 billion, but as costs ballooned council voted in 2016 to scale back the plan to a single stop at the Scarborough Town Centre, and to supplement the subway extension with a 17-stop Eglinton East LRT, which would run from Kennedy to U of T Scarborough.

Cost estimates for those two projects also soon exceeded the available $3.5-billion funding envelope, and the LRT is now unfunded.

City and TTC staff have spent the past three years planning the one-stop subway option, and council is set to receive an update as early as April that if approved would advance the project toward procurement. Construction would take six years, with a potential completion date of 2026.

However, subway supporters in government are set to change the plan again. As part of its plan to take ownership of the TTC subway network, the Ontario PC government wants to add two stops, at Lawrence and Sheppard, back to the extension. Transportation Minister Jeff Yurek has pledged to try to fund the additional stations using contributions from developers at no cost to taxpayers.

Experts warn the private-sector approach to funding two additional stops is “far-fetched,” and adding stations could require months if not years of additional design work that would delay construction.

Councillor McKelvie supports adding the additional stops, arguing it’s essential to have a station at the “important transit hub” at Lawrence, and to connect the line to future transit planned for Sheppard Ave. E. Asked when SRT users can expect the subway to be up and running, McKelvie couldn’t give a firm date.

“As long as we have the funds and we have the willpower hopefully we can get that transit built in Scarborough soon,” she said.

Minister Yurek’s spokesperson Mike Winterburn said the province’s plan to upload the subway system from the city “would be structured to build transit faster,” but he also couldn’t provide a clear timeline.

He said “it would be premature at this point to speculate on a timetable for building the Scarborough subway.” 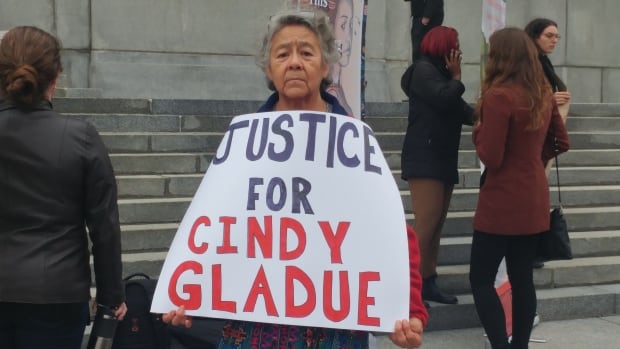 Details of a murder trial that saw the sexual history of the victim, Cindy Gladue, presented to the jury — and her torn vaginal tissue entered as evidence — played out before the Supreme Court of Canada today as the justices heard arguments on whether her accused killer should face a new trial.

Bradley Barton, an Ontario trucker, was acquitted of murdering Gladue, a 36-year-old Indigenous sex trade worker who bled to death in the bathtub of Barton’s Edmonton motel room on June 21, 2011. The case sparked country-wide protests and emotional debate around Canada’s sexual assault laws and the lack of protection they afford Indigenous women.

Today, a series of lawyers intervening in the case presented their arguments to the Supreme Court of Canada. Gladue’s death, they said, is a symbol of the poverty, abuse and lack of dignity suffered by Indigenous women.

Julie McGregor, representing the Assembly of First Nations, called on the justices to send a message to lower courts across the land.

« This case demonstrates, with shocking and disturbing detail, that these women and girls don’t receive the same protections under the law, » she said. « Rather, their privacy and equality rights get blatantly violated by the same individuals charged with ensuring the laws of this country are upheld. »

Gladue bled out from an 11 cm wound to her vaginal wall. Her vaginal tissue was admitted as evidence at trial, sparking outrage about the indignity to her body.

Graphic details of the sexual act with Barton the night before the fatal encounter were also presented to the jury, without first holding a separate hearing to determine their admissibility in court. 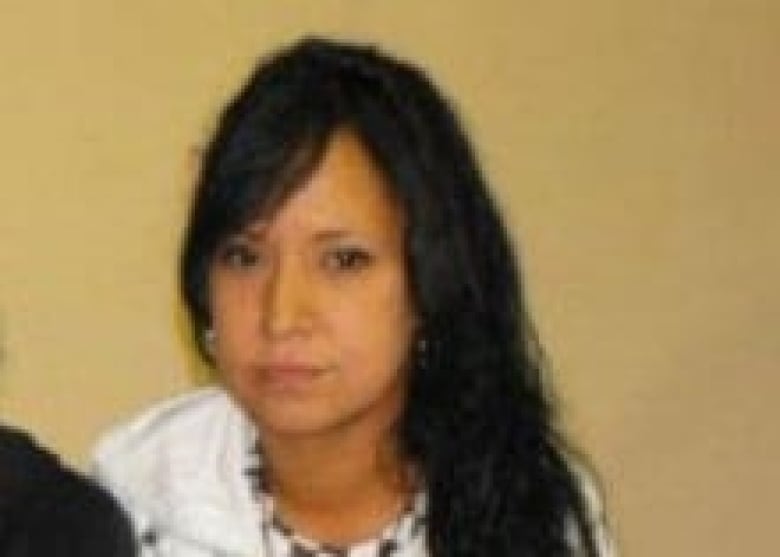 Cindy Gladue, 36, was found dead in the bathtub of a motel room in Edmonton in 2011. (Facebook)

Section 276 of the Criminal Code, known as the « rape shield law, » prohibits the admission of evidence about a victim’s sexual activity that could infer the victim is more likely to have given consent, or is less worthy of being believed.

Supreme Court justices posed tough questions about why those intricate details of Gladue’s sexual past were both openly disclosed and deemed relevant in Barton’s trial.

Justice Andromache Karakatsanis suggested past activity should not be a factor.

« The fact that someone is a prostitute, and may have engaged in sexual activity in a commercially based transaction on a previous occasion, how is that possibly relevant to the issues this jury had to decide? » she asked.

Justice Michael Moldaver said facts of past sexual history are permitted as evidence in narrowly limited circumstances because of their potential for prejudice. In this case, he said, that prudence got « all skipped over. »

Moldaver also noted that consent on one occasion does not extend to another, and that in the second encounter, Barton admitted the act of inserting his hand into Gladue’s vagina was « more extreme and forceful. »

« It would be a mistake of law to say she consented the night before, therefore I can assume she’s going to consent tonight. That is classic error of law. That is rape mythology, » Moldaver said.

Peter Sankoff, one of two lawyers representing Barton, said the defence only elaborated on details of the sexual activity after the Crown told the court Gladue was a prostitute and that it was the second of two sexual encounters between the two that ended in her death.

He said the appeals process, which overturned Barton’s acquittal and ordered a new trial, was flawed because it accepted « alternative theories » from the Crown that hadn’t been raised at trial. Ordering Barton to be tried again amounts to « double jeopardy, » Sankoff said.

Sankoff said an « erroneous narrative » has developed around the case.

« In spite of the many important social issues raised by these parties in their submissions, I would suggest to you this appeal is actually what can go wrong when appellate courts go forget their role in the adversarial system and ignore due process standards in an effort to reach outcomes they regard as more desirable, » he said.

Lawyers for the Alberta government said the trial judge made several errors and omissions in his charge to the jury regarding absence of motive, the accused’s conduct after the act and what constitutes consent.

Jean Teillet, representing the Women of the Metis Nation, called the act of presenting Gladue’s body tissue in court « horrific. »

« The dismemberment of an Indigenous woman’s body and the use of it as evidence in a trial was an assault by the state on an Indigenous woman, » she said. « It has shocked the conscience of the country and I say it has brought this system of justice into disrepute. »

The Supreme Court will weigh the arguments — which included submissions from 15 intervenors — before issuing a judgment. Justice Sheilah Martin did not sit on the bench because she served on the three-member Alberta appeal court that overturned Barton’s acquittal. 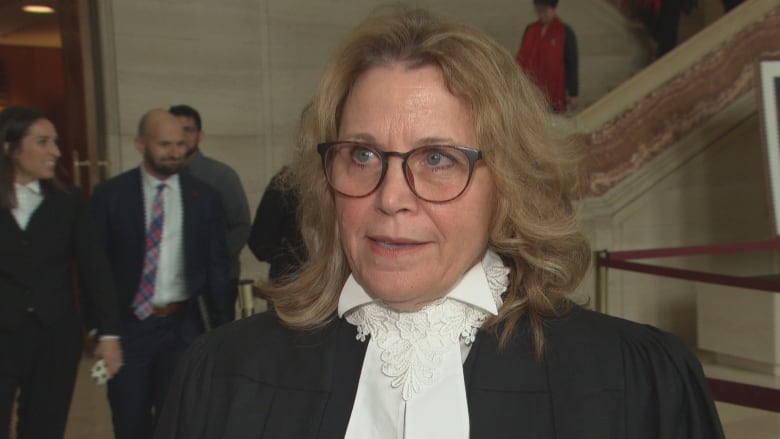