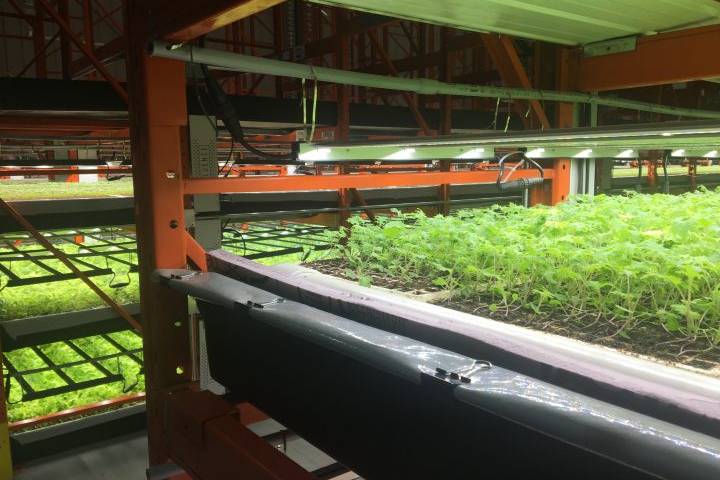 The kale being used in a salad at Model Milk was harvested just an hour before being tossed in a bowl on Saturday. The popular Calgary dining spot is one of around 30 restaurants that now serve produce grown at Deepwater Farms.

“It’s so juicy and so fresh,” said Model Milk chef Blair Clemis. “It’s something where there’s no degradation of quality due to travel.”

Located in a Calgary warehouse, Deepwater Farms aquaponics facility is producing 500 kilograms of greens and 250 fish every week.

“It’s really exciting to be able to do it year-round in Calgary and help lead the way for other growers to be able to provide more fresh and local options in Calgary,” said Freshwater Farms CEO Paul Shumlich.

The huge tanks in the warehouse hold around 14,000 sea bass. Their waste, in turn, is used as fertilizer for the plants that are seeded in coconut husks, whose roots are suspended in water and grown under LED lights.

In addition to eliminating water waste and the waste from when veggies are shipped from far away, the plants are grown in a controlled environment. And that, aquaponics proponents say, should be comforting for consumers concerned about E. coli contamination.

“We can eliminate the use of pesticides and herbicides and we can control the exposure of the plants to any potential contaminants as opposed to growing in a large field,” Shumlich said.

Model Milk is also looking at putting fish raised at the aquaponics farm on the menu. Fish from the facility is now served as several Calgary restaurants and markets, including Shokunin. As for price, staff at Model Milk say it doesn’t cost any more to make a salad using Calgary-grown greens in the dead of winter.

“We are able to get product that has been cut the same morning that we need it and it’s really fantastic to get something that is as fresh as it is and the quality is fantastic,” Clemis said. “It’s one of our best-selling items here.”

The goal next year is to keep stacking up the crops warehouse and produce 2,000 kilograms of produce every week. Shumlich said they are also looking into building another facility in the Calgary area.