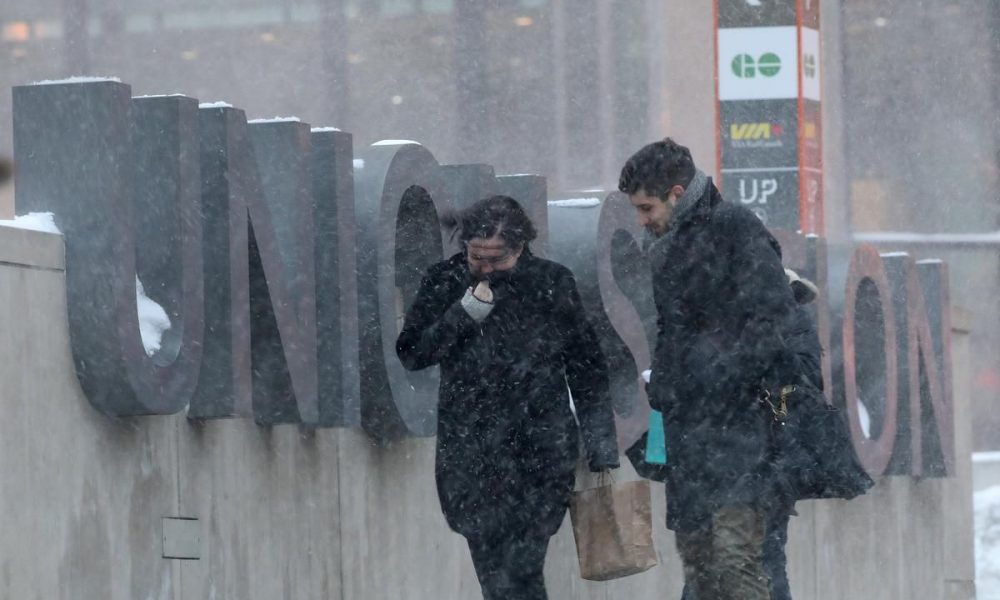 The GTA weathered a heavy storm Monday, enduring more than 20 cm of snow with strong winds and hazardous travel conditions that are expected to continue into Tuesday morning.

Environment Canada issued a winter storm warning for the City of Toronto around 5:30 p.m., replacing the snowfall warning from earlier in the day.

Inclement weather had a significant impact on road conditions throughout the day Monday and through the evening commute, with visibility reduced almost to zero at times. The weather forecaster has said blowing should slowly taper off overnight but road conditions are expected to be treacherous.

Shortly after 11 p.m. the weather agency issued an update advising people to “avoid travel tonight and Tuesday morning if possible.”

Air travel was heavily affected throughout the day on Monday. Hundreds of flights — over 30 per cent of all arrivals and departures — were cancelled at Pearson Airport throughout the day. According to GTAA spokesperson Robin Smith, the airport and various airlines “agreed on a reduced rate of departure,” meaning flights were staggered for “safety’s sake.”

Dozens of flights at Billy Bishop Airport were delayed or cancelled throughout the day as well.

Police reported trouble with stuck cars on the Don Valley Parkway northbound near the Don Mills exit around 9:30 p.m. Toronto police Const. David Hopkinson tweeted that there were “many cars” stalled or unable to manage in the snow. Officers requested the assistance of any available tow trucks to help free the cars.

According to Metrolinx, buses experienced up to 30-minute delays in the afternoon, increasing to delays of up to 80 minutes through the evening. As of around 8 p.m. Monday evening, all train lines were operating with 10- to 15-minute delays.

Metrolinx media relations spokesperson Fannie Sunshine said Metrolinx’s TTC GO protocol was in effect through Monday evening and night to alleviate some of the snow-induced chaos. The protocol allows commuters to use GO transit within the City of Toronto on a TTC fare, and vice versa.

“Better safe than sorry,” he tweeted.

The TTC also experienced a closure unrelated to the weather around 8 p.m. when police received reports of a man with a gun approaching people at Dundas station. Line 1 was closed between Bloor and Union stations for several minutes while police investigated.

The man was eventually arrested.

Plowing operations for the Don Valley Parkway and Gardiner Expressway began around 5 p.m., with plowing for main roads beginning at 6 p.m. and continuing through the evening.

Sidewalk plowing on high-volume routes took place from 6 p.m. to around 2 a.m., and then resumed around 8 a.m. Tuesday morning.

Schools across the GTA remained open Monday despite the weather.

Post-secondary institutions across the city closed their doors as well. George Brown College closed at 3 p.m., the University of Toronto Mississauga and Sheridan College UTM campuses at 4 p.m., and U of T’s Scarborough campus at 5 p.m.

Ryerson and OCAD Universities cancelled all classes after 6 p.m. Ryerson campus remained open, while OCAD closed all school buildings. All Humber College campuses and the University of Guelph-Humber also closed at 6 p.m..

U of T’s downtown campus cancelled classes and course-related activities at 6 p.m., although campus remained open.

Environment Canada predict snowfall accumulations of up to 25 cm by Tuesday morning. The highest amounts were predicted closer to Lake Ontario due to extra moisture from the lake. The snowfall was the result of an Alberta Clipper that crossed the region.

Winter storm warnings are issued when multiple types of severe weather are expected to occur together.

With files from Mississauga News. 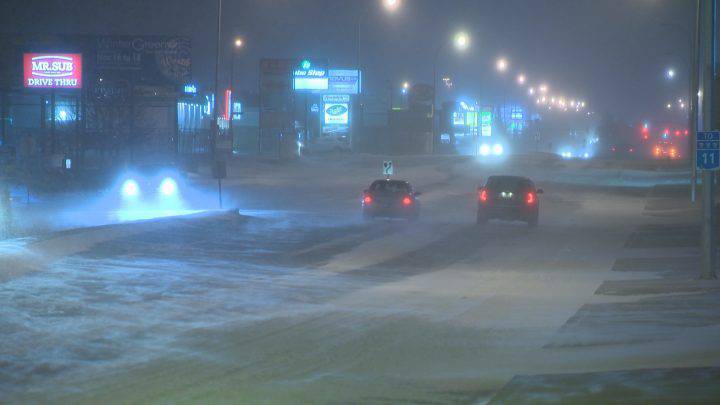 Blowing snow and howling winds ensured the morning commute was the first treacherous winter drive of the season – especially for those without snow tires.

“We had sanders and plow trucks out last night working all night, working extra hours into the morning shift to have coverage for rush hour traffic,” City of Regina’s director of roadways and transportation Norman Kyle said.

Eight sanders, eight graders and one sidewalk-clearing machine were on the roads on Tuesday, but the snow still wreaked havoc on the Queen City.

The accidents were mainly in suburban neighbourhoods, which could be a concern for some drivers – especially since the city has no plans to plow those roads.

“An event like this, we wouldn’t be touching residential roads just yet. Just not enough snow, not enough ice,” Kyle said.

Kyle said he understands the driving conditions aren’t ideal, but added it will take a little more snow for crews to be out in full force.


READ MORE:
Regina and area wakes up to winter wonderland

“We got a far bit of snow, but nothing close to a systematic plow – so it’s manageable within that equipment force,” Kyle said.

“Once we get five centimetres or more [of snow], we will start the systematic plow.”

Kyle said when the city is in storm mode, they focus on high-speed routes and major intersections. If ruts caused by snow in neighbourhood roads get bad enough, the city would consider sending graders to even them out.

According to SGI, the best plan is just to drive for the weather.

“It’s always important when you first head out to get a feel for the road, start a little bit slowly, get a sense of how your car is performing with the road conditions and the traction,” SGI communications manager Tyler McMurchy said.


READ MORE:
What you need to know before your purchase winter tires

That means giving a lot of distance between cars and braking or accelerating gradually – and if you do spin, don’t panic.

“Ease up on the accelerator [and] brake gradually. If you find yourself going into a bit of a tailspin, look where you want to go and steer there,” McMurchy said.

Another piece of advice, McMurchy recommends, is to give yourself more time in the morning for your commute to ensure you get to where you’re going safely.