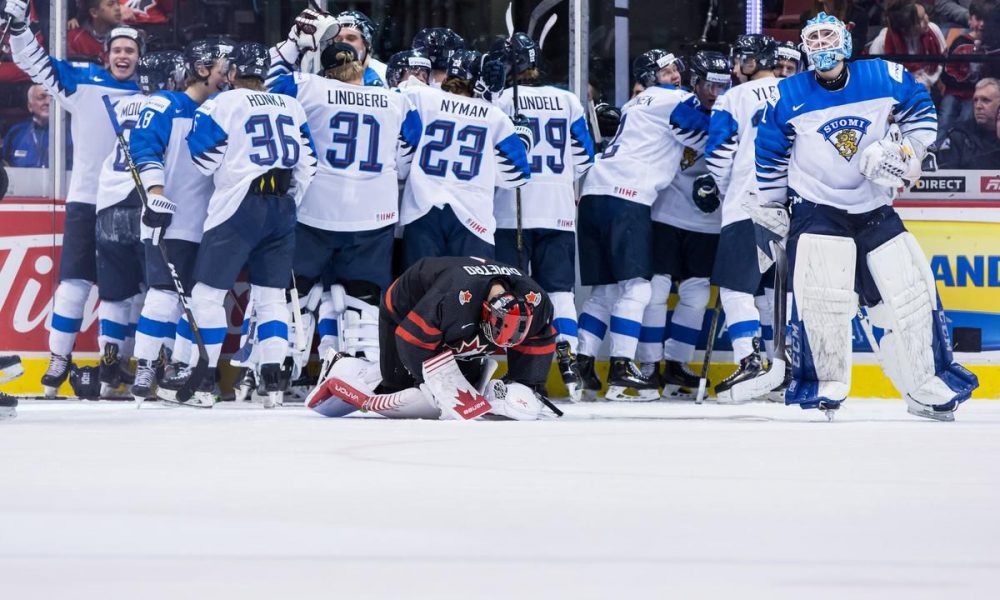 But that’s what happened on Wednesday.

Finland scored with 47 seconds to go in the third period to send the game to overtime, and then defenceman Toni Utunen scored in OT to beat Canada 2-1 in the quarter-finals.

“You don’t plan for things like this, two kind of fluky goals that win a hockey game,” Team Canada coach Tim Hunter told TSN. “We’re all disappointed because we all care. I know it’s here in Canada, but it’s not easy winning this tournament.”

But that’s it for Canada, who will go medal-less for the first time in the 13 times the country has hosted the tournament for the world’s best junior-aged hockey players.

Ian Mitchell of the University of Denver scored in the second period for Canada. Finland got a lucky bounce to tie the game with 47 seconds to go. Eeli Tolvanen, who had been frustrated all game and all tournament, shovelled the puck at the net, where it bounced off the side of the netting and then bounced off Aleksi Heponiemi’s shin pad past goalie Michael DiPietro to silence the Rogers Arena crowd and force overtime.

“It was one of those bad bounces of the game,” said DiPietro. “Tough one to swallow. Whether it’s a small ounce or a big one doesn’t really matter. We lost.”

Max Comtois failed to score on a penalty shot in the extra frame while defenceman Noah Dobson’s stick broke on a one-timer with the Finland net wide open from his angle. Canada lost possession of the puck as a result, with Utunen the beneficiary.

Fans even chanted “DiPietro” late in the second period after the Canadian goalie made repeated saves to preserve a 1-0 lead. DiPietro, a third-round pick of the Canucks in 2017, was giving Vancouver perhaps fans a taste of what the future might hold.

At the end of the game, his head hanging as he fought back tears, they chanted his name again.

Canada has won medals the previous 12 times the tournament was held here: Five gold, five silver, two bronze. The last time any team has won back-to-back gold medals was a decade ago, Canada in 2008 and 2009.

The last time Canada failed to make the semifinals was 2016, losing to Finland in Finland.

Ian Mitchell got the only goal of the second period. Morgan Frost started the play in the neutral zone with a steal and spin pass to Barrett Hayton to set up Mitchell, who joined the rush. But again, Finland outshot Canada 12-8 and DiPietro had to make a number of saves, with Nashville prospect Tolvanen his favourite victim.