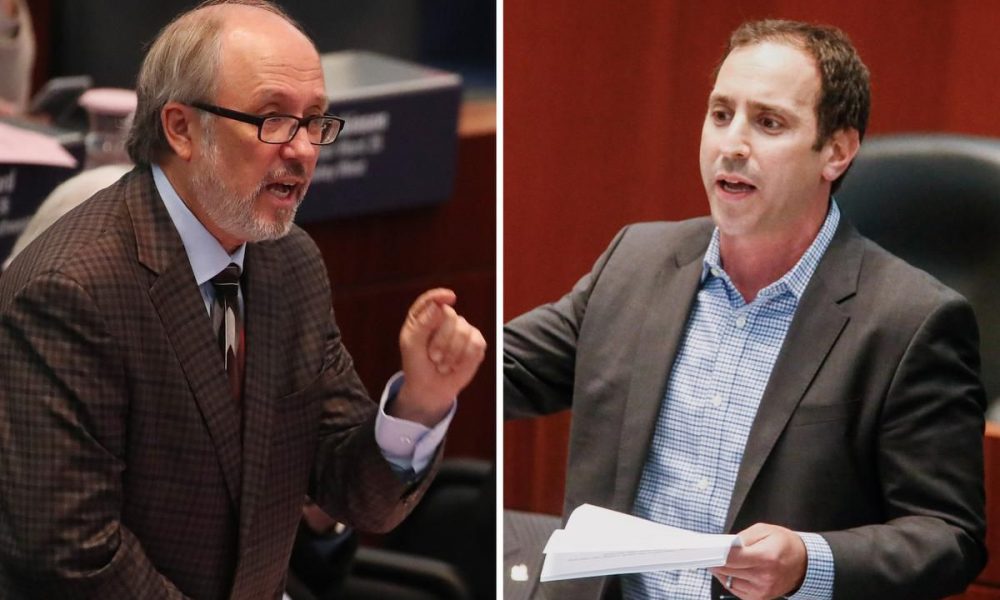 Incumbents Josh Matlow and Joe Mihevc made their case to a crowd of Toronto-St. Paul’s voters at the lone ward debate Monday night.

They both acknowledged early on in the evening that neither of them chose to be in this situation — a council shrunk to 25 wards from 44 that has pitted them against one another within much larger boundaries.

But things became heated when an audience question challenged Mihevc directly on the “ethics” of John Tory’s robocall endorsing the longtime councillor. On Monday, Tory told reporters that Mihevc sought out his endorsement. Tory’s campaign spokesperson earlier told the Star the call was paid for by Mihevc’s campaign.

“He is the mayor of the city of Toronto and his voice is important,” Mihevc said in front of more than 100 people gathering in the auditorium of the Timothy Eaton Memorial Church on St. Clair Ave., rejecting that there were any ethical issues and noting other endorsements he has received. “The mayor has said to me that he is supporting me because I can work with him. Because we can get things done.”

Matlow said he didn’t think the endorsement said as much about Tory’s relationship with Mihevc as it did about the incumbent mayor’s desire to get rid of Matlow, noting his ongoing fight against the controversial, more-than-$3.35-billion Scarborough subway, which Tory supports.

“I’m not seeking anyone’s endorsement who I can’t strongly support as a leader of the city,” he said. “I will work with the mayor when he does good things … When they do things I don’t agree with, I think all of us should take a stand.”

He challenged Mihevc on not supporting the opening of federal armouries during a shelter capacity crisis last winter, instead proposing a plan worked on with the mayor’s office to open hundreds of new beds over several years. Tory, week’s later, agreed to request the armouries be opened.

“I honestly don’t have a plan B,” Mihevc said to an audience question about what the candidates would do to serve the community if they lose on election day. “I’m really committed to this work.”

Matlow, similarly, said he was dead-set on winning.

“My focus is on being our councillor,” he said. “My focus has been on what I want to do to build a progressive caring city.”

NEW WARDS. BIG STORIES. Get the scoop on how Toronto’s 25 new wards impact you. Subscribe to the Star.

It’s only one of two endorsements in ward races that Tory has made. He said Monday no others are currently planned.

Mihevc, along with other left-leaning colleagues who have in recent days publicly endorsed Jennifer Keesmaat for mayor, signed her nomination papers to run for that office. Mihevc said Friday he is not endorsing any mayoral candidate.

Matlow responded to the situation over the weekend, tweeting: “I know that in politics it’s far easier to toe the line. But I don’t accept that we should always support John Tory or Doug Ford just because they say we should. I will continue to strongly challenge any decision that doesn’t put the residents we serve before politics.”

The endorsement appears to have caused some blowback from voters, with Matlow’s campaign saying it had rallied volunteers and supporters to their cause.

“I didn’t vote in the advance polls because I was still torn between @JoshMatlow and @joemihevc,” wrote one user, @VAinTO, who has tweeted she is supporting Keesmaat. “And then Mihevc accepted Tory’s endorsement. Deeply disappointed, but at least now I guess I know how I’m voting.”

At a campaign stop Monday announcing climate change measures, Keesmaat said there will be “many endorsements” this campaign when asked about Tory’s endorsement of Mihevc.

“I’m very thrilled that the candidates that I’ve endorsed so far and the candidates I will be endorsing are candidates who are deeply principled and driven by a vision of this city that is inclusive, and as per our announcement today, sustainable, and also that is forward-looking.”