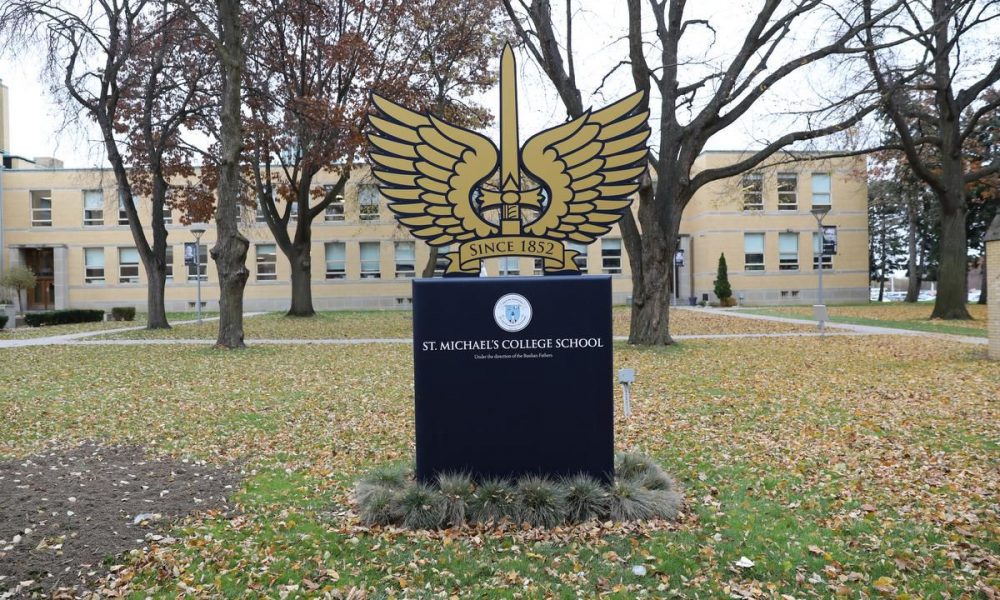 St. Michael is not really a saint. He’s an angel, archangel.

According to scripture, Michael led the army of angels who cast Satan into Hell. He stood guard at the gates of paradise after Adam and Eve were banished from Eden.

A warrior-angel, usually depicted wielding the sword of justice, to separate the righteous from the evil (Revelations) on Judgment Day.

Michael’s duties include escorting the faithful to Heaven at the hour of death.

He is the protector, especially from lethal enemies. Patron “saint” of soldiers and police officers and doctors.

First they huddled, then they investigated internally, and only belatedly did police learn of the allegations.

On Tuesday, 24 hours after six boys were charged with assault, gang sexual assault and sexual assault with a weapon, police revealed they are investigating “two additional occurrences” related to videos at the core of the sordid case, footage documented by participants and/or witnesses and posted to social media.

Two more videos rising to the surface of the internet muck pit.

One of the videos had been out there, making the online rounds, for at least two weeks, seen by untold numbers of voyeurs.

At Toronto police headquarters, Insp. Domenic Sinopoli, commander of the sex crimes unit, said he wasn’t astounded that further incidents have been discovered — one described as “threatening,” the other as an assault with a belt.

“I don’t think anyone is surprised by this. I don’t really want to alarm anybody (but) but it did not surprise when I learned that we had an additional two videos. I expect that we’ll get more people coming forward and I encourage that. I don’t want them to assume that someone else has talked.”

Six videos. At least four victims. It’s unclear if the individuals on the most recently obtained videos are the same boys being mistreated in the earlier footage. Police are still trying to identify these youths. “We believe they’re related but we haven’t been able to identify them at this stage.” Sinopoli wouldn’t say how police came in possession of the new evidence. But police believe the videos were also made at the school.

To be clear: The activities depicted aren’t the stuff of mild hazing, which is a common form of bonding on sports teams — like then-Blue Jays rookie pitchers Aaron Sanchez and Marcus Stroman being made to wear women’s corsets and fishnet stockings as they boarded the team bus on the way to catch a charter flight.

These, as described, are criminal acts which have resulted, thus far, in 18 criminal charges. In one video, a boy appears to be sexually assaulted with a broom handle in a locker room. According to the school, members of the junior football team and its coaches met with school authorities after the videos became known to them but before police were summoned.

So of course St. Michael’s, renowned for both its athletic and scholarly achievements, is under the microscope, with questions asked about just what kind of vile culture is being incubated at the institution, however unfair that might be to the more than 1,000 students who had nothing to do with the alleged assaults.

“I have no information to suggest a ‘fight club’ or any culture of hazing,” Sinopoli stressed.

St. Mike’s has already expelled eight students and suspended another in connection with at least two of the videos. Five boys subsequently turned themselves into police and one was arrested on his way to school. All were released on bail after making court appearances on Monday.

It’s also unclear if that sixth student arrested is among the expelled. “It is my understanding that the school was not aware of his involvement,” said Sinopoli.

“In fairness to the principal, they’re not privy to everything that we know.”

While minor physical contact can be consensual, “once you engage a weapon or you cause bodily harm, that’s different,” Sinopoli noted.

The timeline of events — who knew what when — appears more a concern of the media, which brought to police early this week the locker room video and another showing a boy, in his underwear, sitting in a sink, getting slapped as water is splashed on him.

“I appreciate there’s a lot of media interest with respect to the timeline of all this,” said Sinopoli. “That ship has sailed. The timelines are not at the forefront of this investigation.”

Nor, apparently, is the Roman Catholic school’s principal, Greg Reeves over the lag in getting police involved.

“I don’t know,” said Sinopoli when asked directly whether Reeves might be charged. “That is not the focus of this investigation.”

The school is looking into opening an app where students can provide information anonymously. Although police will be given that information, the school is obviously conducting a parallel investigation, which might not be wise.

“Sometimes students may be a little reluctant to come to police. We prefer that students would come to us with information.”

Repeatedly, as if learning nothing from their bumbling, the school has wrong-footed this scandal.

“I think this is a teaching moment, particularly for the school principal,” said Sinopoli. “ I think if he could walk this back he’d likely do things differently.”

The Basilian Fathers, an order devoted to education, opened the Toronto school in 1852, originally in a basement, and still runs it as a private, independent institution.

But St. Michael is a ubiquitous presence around Toronto. There’s St. Michael’s Cathedral, St. Michael’s College at U of T. And a mural of the saint covers the outer western wall of St. Michael’s Hospital, which bills itself as the city’s “Urban Angel.”

And St. Michael’s College School, a-roil now in ghastly events, the traumatizing of boys by boys.