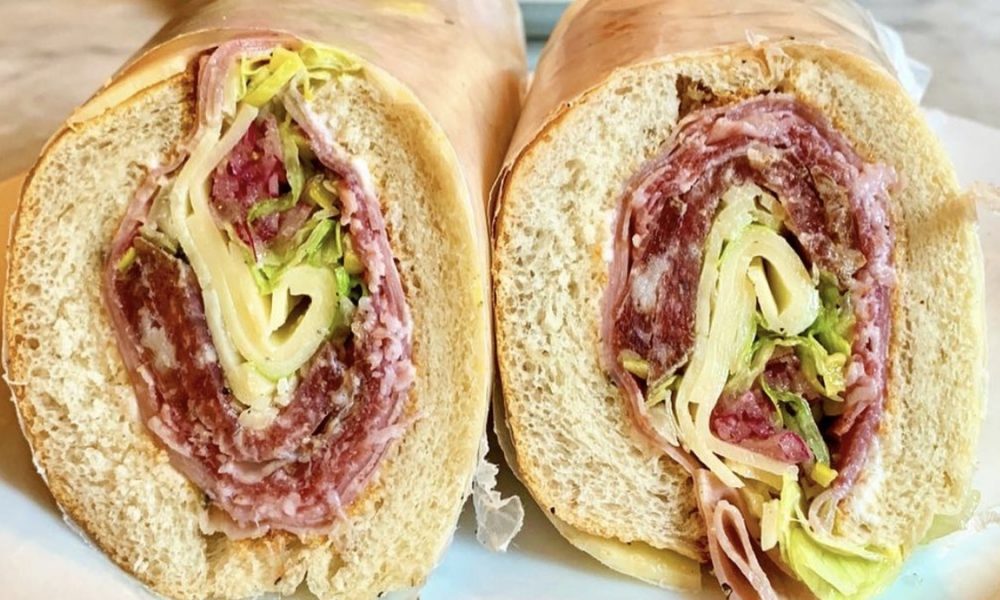 A hero, a hoagie, a grinder, a sub

Over the years, I’ve used the NFL playoffs as an excuse to turn my apartment into an Italian hero shop.

I run to a nearby Italian market for the meats—pistachio-flecked rounds of mortadella, fat-marbled discs of coppa, thinly shaved sheets of prosciutto cotta (cooked ham; the pricey prosciutto di Parma is too chewy for hoagies, IMHO), and maybe a dried finocchiona sausage for a bit of garlicky bite.

I then head to my local grocery store for the basics. First, a bunch of those simple sub rolls from the plastic bin—cottony soft in the middle, a little crackly on the outside.

Iceberg, which I slice into thin ribbons, or what we at BA refer to as shrettuce.

A red onion that I slice super thin on a mandoline and then quick pickle them with some rice wine vinegar, a pinch of salt and sugar and a splash of water.

And then I set up shop and invite whoever is around.

The more I’ve done it, the more I’ve learned. When I first started assembling homemade heroes, I delicately stacked the meats and fixings like a deck of cards. And, don’t get me wrong, it was tasty. It allowed the ribbons of meat and confetti of shrettuce to breathe a bit.

But a concerned, sub-obsessed reader DMed me after watching a video of me making these heros. He pointed out that the proper way to make an Italian hero was to employ what I’ll call the horseshoe method.

First, slice the roll, but not all the way through, so it lies flat. Then you lay the various, thinly sliced meats like you’re tiling a floor. Then comes equally thinly-sliced provolone cheese, layered with the meats. (Although, as one of my Instagram followers pointed out, I should place the cheese on the outside so it doesn’t get bunched up in the middle.) You pile on the shrettuce and shaved onions and douse them with some oil and red wine vinegar (don’t be stingy), and hit ‘em with a shake or two of dried oregano.

Then you fold the whole thing over onto itself so it creates a horseshoe shape, the fixings on the inside so they don’t make the bread all soggy, the meats on the outside so they don’t form into a dense ball in the interior. And, oh yeah, I do like a slick of mayo with some Calabrian chile spread or chopped pickled peppers on either side of the roll. I know, I know—mayo.

Each time I make the heros, they turn out differently. Sometimes I feel like I should’ve splashed them with more vinegar. Sometimes I get the meat-to-bread ratio just right; sometimes I lean too carby.

However they turn out, they’re inevitably some degree of delicious. And, as a finishing touch, I’ll wrap each one in wax or parchment paper before slicing it and handing it to one of my “customers.” It’s a mostly-unnecessary step but it makes the sandwiches look great. And, really, what’s better than a good-looking Italian hero? 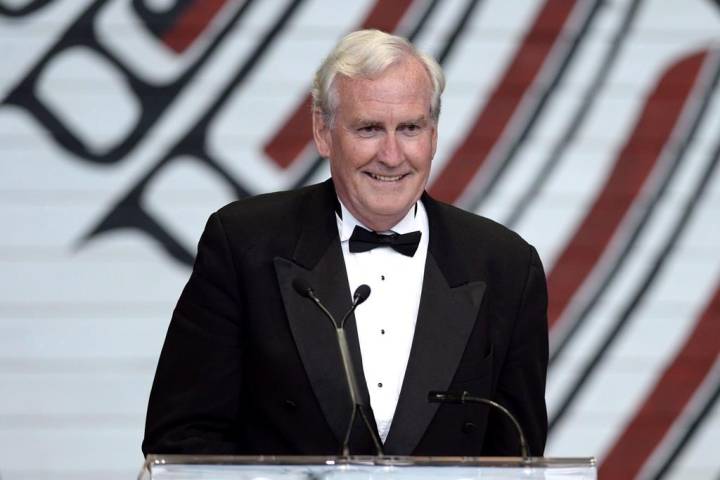 Kevin Vickers has been described as a national hero for his role in stopping a gunman’s attack on Parliament Hill in 2014, but New Brunswick pundits say he’s largely seen as an outsider as he considers a political bid in his home province.

Vickers, who has served as Canada’s ambassador to Ireland for the past four years, announced this week he may be interested in seeking the leadership of New Brunswick’s Liberal party.

The out-of-the-blue statement came days after former premier Brian Gallant confirmed he would be stepping down as Liberal leader sooner than expected.

“It was a surprise,” said J.P. Lewis, a political scientist at the University of New Brunswick in Saint John, adding there were no previous indications Vickers had partisan leanings.

Though Vickers could be considered “almost a historic figure,” he doesn’t have a much of a presence in the province, Lewis said in an interview.

“For most people, he’s a public figure from one moment in time. That’s it.”

On Oct. 22, 2014, Vickers was serving as sergeant-at-arms of the House of Commons when he fired the shots that killed a man armed with a .30-30 rifle. Michael Zihaf Bibeau had barged into Centre Block on Parliament Hill after killing honour guard reservist Cpl. Nathan Cirillo at the National War Memorial.

Vickers was appointed ambassador to Ireland by then-prime minister Stephen Harper in January 2015.

On Monday, Vickers told The Canadian Press he’s a “long ways from making a decision” about contesting the Liberal leadership, noting that he’s been in public service for nearly 43 years.

Born and raised in Newcastle, N.B., which is now part of the City of Miramichi, Vickers worked as an RCMP officer for 29 years before joining security staff at the House of Commons in 2005.

“It’s a long haul,” he said in an interview Monday from Trout Brook, N.B.

Vickers has deep roots in New Brunswick. His father, Bill, helped establish the Northumberland co-op dairy in the province decades ago.

However, Vickers has spent many years working outside New Brunswick.

“He has largely been away for so long he is an outsider,” Mario Levesque, a politics professor at Mount Allison University in Sackville, N.B., said in an email.

“At best, he has drawn some media attention to the Liberal party … They now have a ‘star’ candidate media-wise, but thin on the politics side.”

“It is acceptable to move away and come back if you are a Maritimer,” said Levesque. “After all, people are our No. 1 export.”

Other political observers say Vickers’ absence from New Brunswick’s political scene could be his greatest strength.

“On the plus side, he is an unknown political quantity and perhaps the Liberal party wants a shakeup with some new people and fresh ideas,” Jamie Gillies, a political science professor at St. Thomas University in Fredericton, said in an email.

Roger Ouellette, a public studies professor at the Universite de Moncton, suggested the Liberals would be wise to seek a leader from outside the political establishment and, preferably, a bilingual anglophone.

“He will fit the bill,” Ouellette said, noting the party is keenly aware that it has lost much of its support in largely English-speaking areas of the province.

“Maybe it’s a good thing to have a fresh face, and a fresh way to look at the issues.”

Lewis agreed, saying Vickers’ experience stands in contrast to that of Gallant, who was widely considered a career politician by the time many voters turned their backs on the province’s entrenched two-party system in last September’s provincial election.

Last week, Gallant said the party needed to move on after winning just 21 seats – one fewer than the Tories. The Liberals relinquished their hold on power in November after losing a confidence vote in the legislature.

Like Vickers, Progressive Conservative Premier Blaine Higgs is considered a political outsider, having worked at Irving Oil for 33 years before turning to politics four months after he retired in 2010.

“Maybe someone like Vickers, an outsider, is a good match to Higgs,” said Lewis. “That’s what the Liberals need to challenge Higgs in the next election.”

No candidates have entered the Liberal leadership race, though several names are circulating.

Bourque said Vickers would bring a “wealth of experience” to the party.

He said Vickers was not actively recruited as a candidate.

“I wouldn’t say anybody went after anybody. It kind of just organically happened.”

Higgs’ minority government is relying on support from a third party – the right-leaning People’s Alliance, led by Kris Austin. But that arrangement is set to expire in less than 18 months.

That means an election could be less than two years away.

“We are very mindful that we are in a peculiar minority government situation,” Bourque said. “Our leadership situation tends to be a bit more pressing … The ball is in Mr. Vickers’ court.”

According to federal rules, Vickers must get permission from the Public Service Commission if he plans to be a candidate in an election. However, the commission says seeking the leadership of a party is considered a “non-candidacy political activity,” which does not require permission.

However, the commission says all diplomats must carry out their public duties in a politically impartial manner and “should not carry out political activities if they would cast doubt on the integrity or impartiality of their office.” 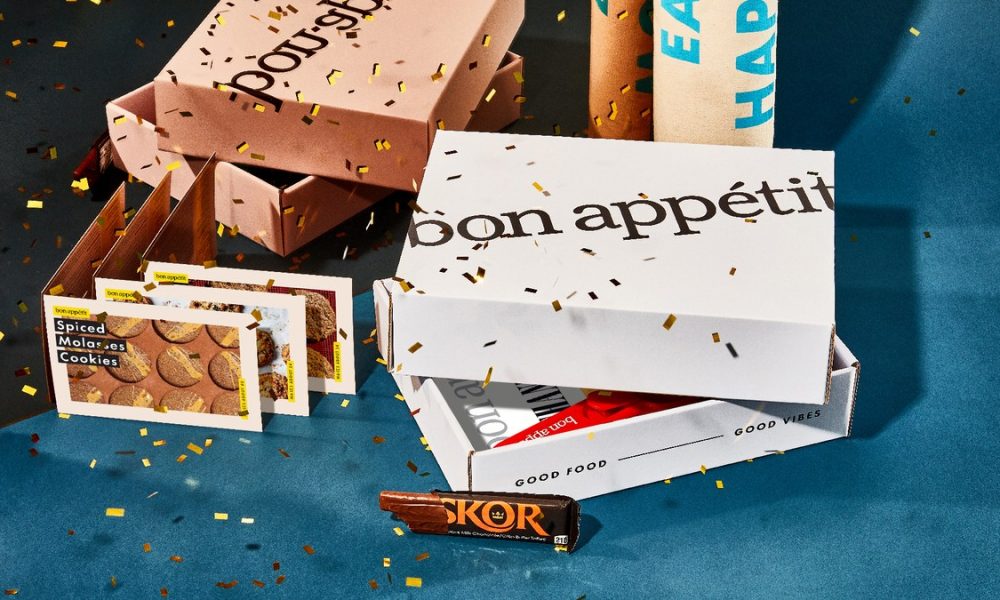 Here’s a little unsolicited holiday advice from the Bon Appétit team to you: People care a lot about what you get them each holiday season. Sure, we all know that it’s the “thought that counts” and as long as your heart is “in the right place,” everything will work out fine. But really, that scratchy sweater your great aunt gave you? We didn’t think so. Instead, give Bon Appétit’s brand spankin’ new gift box and be the holiday hero your family and friends deserve.

People want gifts that keep on giving, and this one does—all the time. The box comes with a one-year subscription to Bon Appétit. We’re talking print AND digital, plus a bonus issue in the box, which means your cherished recipient never has to worry about missing out on the coolest new restaurants, the hottest trends, and the best new recipes BA has to offer.

The bundle also boasts a signature “Don’t Worry, Eat Happy” tote, a reusable Stasher silicone storage bag (popularized by a little ol’ tv show called Shark Tank!), and a stash of BA editors’ favorite cookie recipes. We’ve even gone the extra mile and included a cookie scoop and two Skor bars, aka the closest thing to a perfect pre-made English toffee you’ll find. This way, your recipient can get right to making our new Spiced Snickerdoodle Crunch Cookies and you can get right to eating them.

Who could say no to all of these goodies getting delivered to your door? Take our advice this holiday season and give the gifts people will truly want. And who knows, you might just end up with a few sweet treats for yourself.

What are you waiting for? Get gifting!