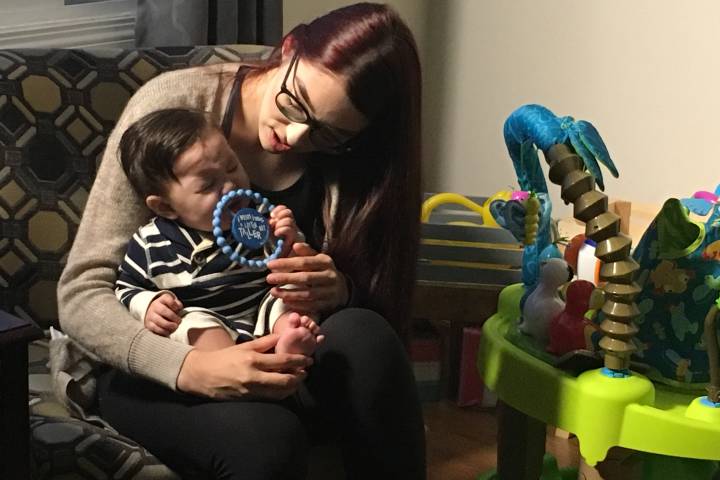 A First Nations mother is offering thanks after a woman was told to leave an ETS bus for hurling racism at her and a pregnant friend on Thursday night.

Dalen Cardinal takes the bus to go to school every day.

Coverage of racism against First Nations people on Globalnews.ca:

‘It made me feel fear and anger’: Ontario’s Regional Chief reflects on his first brush with racism

The new mother was on the 4 West Edmonton Mall with a friend when a woman wearing a white jacket boarded the bus at Bonnie Doon Mall.

“She started to antagonize my eight-months-pregnant friend. She was calling her fat — a fat Indian. Saying we belong at the shelter because we’re no good for nothing Indians. Stereotyping us – saying we live off the government and at least she didn’t get pregnant young.”

The woman ignored Cardinal’s requests to stop, so she started recording her behaviour.

“At least I didn’t get knocked up,” the woman said in the video.

That’s when a passenger came to the friends’ aid.

“It’s none of your *** business who supports who,” the other passenger said.

The situation appeared to escalate when the ETS bus driver stepped in.

“If you’re going to talk like that you need to get off this bus,” he told the woman in the white jacket.

But she was relentless, continuing to make remarks.

At the next stop, the Chapters on Whyte Avenue, the bus driver left his seat and approached her.

“You know what? You can go wait for another bus,” he said calmly.

The woman in the white jacket could be seen standing up and walking toward the back doors, but not before yelling back at the other passengers.

The video ended there.

It had been viewed nearly 150,000 times on Facebook as of Friday night.

Cardinal said she went home and burst into tears after the ordeal.

“I’m thankful the bus driver and the other elderly lady had stepped in, because I don’t know what would have happened if they weren’t there,” she said.

Her six-month-old son was with her in his stroller on the bus.

“It still really hurts my feelings. I’m really hurt that it happened to me and my son had to be there,” she said.

Cardinal didn’t go to school on Friday. She said she’s scared to take the bus again.

ETS spokesperson Rowan Anderson said the company does not tolerate racism — toward drivers or passengers.

“In a typical situation an operator would call for assistance and security resources would be dispatched and they would resolve the issue. But obviously in this case he felt his safety wasn’t in jeopardy and he wasn’t going to tolerate this behaviour any longer,” he said.

Drivers have recently been taking de-escalation training, and this one took matters into his own hands.

“We’re proud of our operator. He made a judgment call that he had heard enough and he gave the woman a fair warning,” Anderson said.

Cardinal felt the driver handled the situation in the best possible way.

“He really took into consideration that we’re human too and that shouldn’t be happening, not just to First Nations people — but to anybody.”

She would love an opportunity to reconnect with the driver and the other passenger who came to their aid.

“I wish I could thank them in person.”

As for the woman in the white jacket? Cardinal said she hopes she can become less spiteful in the future.

“I forgive her, for sure. But I really hope that this doesn’t happen to anyone else.”