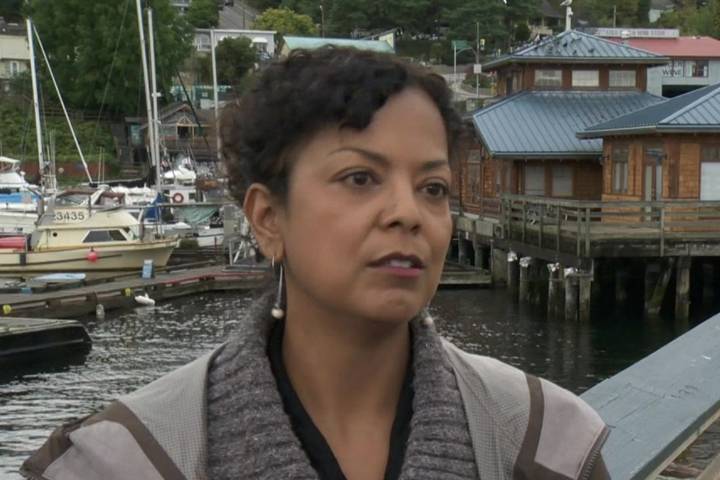 When a casting call hit the local newspaper, many Gibsons residents couldn’t pass up being part of a Hallmark Christmas movie.

For one week in August, the Sunshine Coast community was transformed into the winter setting of A Carousel Christmas starring Kathie Lee Gifford, a film based on the popular Christian Godwinks book series.

“It was very Christmas-y, very beautiful, very typical of a Hallmark movie,” said Lesley Horat, who signed up to be an extra with friends.

Coverage of Hollywood North on Globalnews.ca:

Filming was halfway through its first day when Horat said the movie magic ended with her being marginalized because of the colour of her skin.

Horat said she was allowed to take part in a one scene that featured a crowd watching the lighting of a Christmas tree. When the next scene called for a number of couples to linger behind romantically, Horat was told to sit it out.

“The casting wrangler looked at us and said, ‘Oh no, Hallmark has this policy against interracial couple representation in our productions,’” she said.

Ironically, the married couple was allowed to take part in the scene, even though Kohler is mixed race.

“My husband is part-Ghanaian but apparently looks white enough that we were OK on screen,” said Pettit.

It was Kohler’s brother who tried to pair up with Horat.

“I guess from optics it just didn’t look right,” she added. “He is fairer than I am and so we were kind of set off to the side.”

None were surprised when she voiced her concerns over the alleged policy to other staff on set.

Horat, who has first-hand experience with racial segregation, chose not to come back for the second day of filming.

“My parents are immigrants from South Africa and they left during apartheid… so this sort of no race mixing was part of my young life,” Horat explained.

“We state unequivocally that Crown Media does not have a policy, stated or unstated, regarding interracial couples in our programming.”

“Programs and their characters should reflect the wide diversity of our audience, keeping in mind the importance of dignity to every human being. Sensitivity is necessary in the presentation of material relating to age, sex, race, religion, sexual orientation, ethnicity or national derivation to avoid demeaning stereotypes.”

Kathie Lee Gifford, right, talks about making Hallmark movies based on the “Godwinks” books, on the “Today” show.

Crown Media said it will investigate the allegations to ensure all its third-party production vendors which are tasked with filming the Hallmark movies fully understand their values and policies.

A Carousel Christmas was helmed by Vancouver director Michael Robison, who told Global News he’s never heard of such a policy.

“I’ll talk to the producer of the show and see where this originated but it’s not a policy of mine,” said Robison.

“Some of these people have been working for Hallmark for 10 years and maybe, in their defense, they’ve picked up some bad habits because that’s not appropriate.”

“We are all scared to rock the boat…”

Multiple sources from within the B.C. film industry, who spoke to Global News on the condition of anonymity, said many know of an “interracial policy” that they said has been tied to Hallmark productions for a long time.

“It’s just common knowledge that Hallmark expects people of the same ethnicities to be coupled,” said one insider. “We all are scared to rock the boat on this issue because there are so many productions that are happening.”

Hallmark movies account for dozens of projects filmed in B.C. each year.

Horat and her friends said they likely won’t watch A Carousel Christmas when it premieres on TV in November.

“I felt like they ruined my space where I live because I don’t have to deal with that on a daily basis.” Horat said. “Why even bother showing diversity if you’re going to take it back to 1950s southern America?”