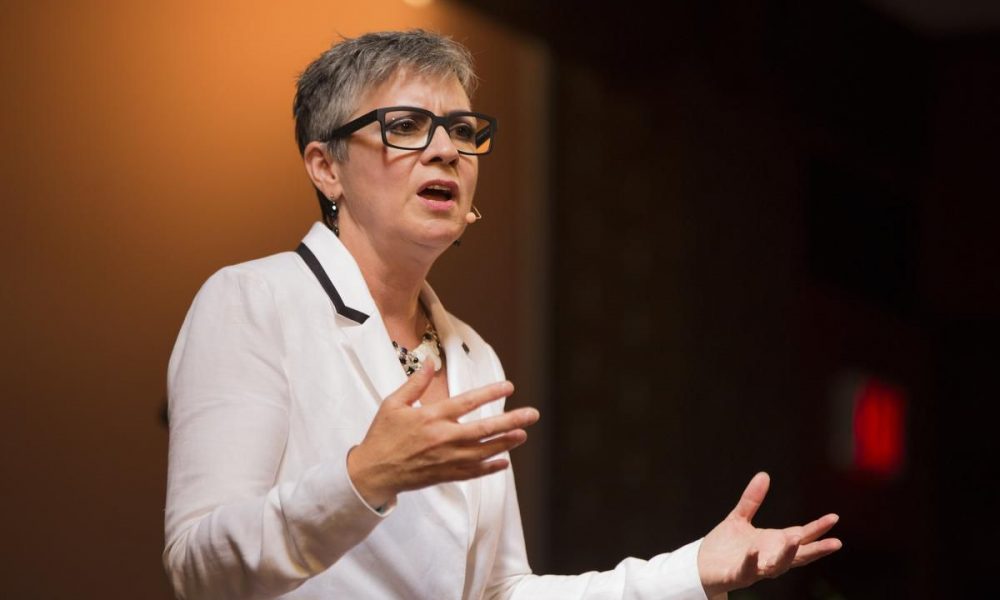 They brought her flowers. They gave her a standing ovation. They repeatedly professed it “a great day.”

This is the cult of Gretta Vosper.

A United Church of Canada minister who doesn’t believe in God.

An atheist — outed herself before the congregation five years ago — rather than the less radical non-theist term, which is a person who doesn’t think of God as a being, thereby avoiding some of the more negative baggage associated with the A-word.

A heretic, frankly, as Vosper herself shorthands it on tweets with the hashtag #heresytrial.

There will be no trial, no formal ecclesiastical hearing, no defrocking. After three-and-a-half years of preparation and internal controversy, the United Church swallowed its theological opposition, last week announcing that Vosper is free to continue her ministry without any sanctions or restrictions, thus aborting a much-anticipated “trial” that had been scheduled to begin next Monday.

Carry on deleting all reference to God or a supernatural being in all sermons and rewritten hymns. Carry on expunging the Lord’s Prayer. Carry on with a fundamentally humanist dogma. Carry on conducting services as a community-centred attestation where everybody gets a shot at the microphone.

But what a cross to bear that gigantic wooden crucifix at the front of the Church of the Master must be, constant reminder of everything this parish rejects. Church of the Master in far-flung Scarborough is only a temporary landlord, of course, providing worshipping space for West Hill United because their building has a leaking roof and other structural issues.

It came as a shock to the wider United Church — Canada’s second-largest religious denomination (and dwindling fast) — when the “inquisition” (the General Council) halted in its tracks on Wednesday, declaring in a joint statement with Vosper and the Toronto Conference that they’d settled all outstanding issues between them.”

Immediately disappearing was the threat hanging over Vosper’s head that she, ordained minister, would be placed on the Discontinued Service List (Disciplinary).

Except, you know, for the exceptional.

The heresy trial would have been the next big step following a 2016 report that found Vosper unsuitable for ministry because she was no longer in “essential agreement” with church doctrine; was “unwilling and unable” to reaffirm the vows she made when she was ordained in 1993.

I don’t know how big the congregation was when this scandal bubbled to the surface in 2015. Vosper, oft inclined to “pseudo-controversial pronouncements,” as described by one critic, had objected to a prayer published on the United Church website by then-moderator Gary Paterson, following the massacre by Islamist militants at the Charlie Hebdo magazine office in Paris. In an open letter, Vosper wrote that she was offended by a prayer that espoused belief in some sort of transcendent entity, pressing Paterson to denounce all religion and eradicate religiosity from the public sphere.

But on Sunday morning, there were fewer than 100 congregants at interim West Hill United. All but a handful white, most of them grey, plus two children, one baby and one mutt. As 60-year-old Vosper noted regretfully in her sermon, the church needs to take risks to make it a more welcoming place to the non-traditional, the minorities and the marginalized. “That’s what the United Church right now is — it’s a great white wall of seniors.”

I would characterize their embrace of Vosper as idolatrous.

They may not believe in God — some still do — but they clearly believe in the virtue of Vosper. Those who don’t have already peeled away, distressed with where Vosper has taken the congregation.

As one introductory speaker reminded: They are “aggressively progressive” and their focus is not on theology.

If I understand correctly, Vosper promotes the rigidly secular, the gospel of get-God-out. Which is stunningly oxymoronic for a church. There are myriad ways to do good work — as this parish, like so many others, is in the process of sponsoring a refugee family. But to strip faith out of doctrine, to go God-less (or godless) is intrinsically, profanely sacrilegious and anti-spiritual. It is what Vosper exalts: Apostasy.

Which is fine. But how can an individual, a minister, wrap herself in the mantle of a formal church while simultaneously repudiating its ethos? Right Rev. Richard Bott, elected this past July to lead the United Church in Canada, hasn’t explained that. And there will likely never be any explanation because the agreement contains a confidentiality clause.

What Bott did say, in a message praising the resolution to church adherents, stressing core values and inclusivity: “The dance between these core values, how they interact with and inform each other, is one that we continue to explore as followers of Jesus and children of the creator. As a Christian church, we continue to expect that ministers in the United Church of Canada will offer their leadership in accordance with our shared and agreed upon statements of faith.”

How can anybody in the United Church take that contradictory statement, in its Vosper hands-off, on faith?

Christian religion, except in charismatic and evangelical interpretations, is losing traction globally, churches shuttered and sold off as attendance plunges. The United Church in Canada, perhaps the quintessential Protestant faith in this country, making a virtue out of easy-peasy belief — the church that stands for nothing which requires rigour or temperance — has tumbled more than most. From its founding in 1925 as a merger of Methodists, Presbyterians and Congregationalists, when it boasted 6.25 per cent of the Canadian population as members — peaking at 1.06 million in 1967 — its adherents have fallen to 1.5 per cent, according to its own published figures. Between 1968 and 2009, it lost more than half its membership.

Relevance is the matter. When you hold nothing sacred, then nothing is relevant.

When you take the God out of religion, as Vosper has done, then you are innately irreligious. Doesn’t make you a bad person but definitely makes you a subversive outlier within the hierarchy of church and theology. Or Vosper could have found a more amenable place in the Unitarian Church, which is post-theist and professes no creed.

“There’s no gloating in this,” Vosper told her congregants. “There’s no waking up in the morning and saying it should have been different, we shouldn’t have had to go through that three-and-a-half years. There’s only gratitude.’’

Swear it on a Bible? Probably not.