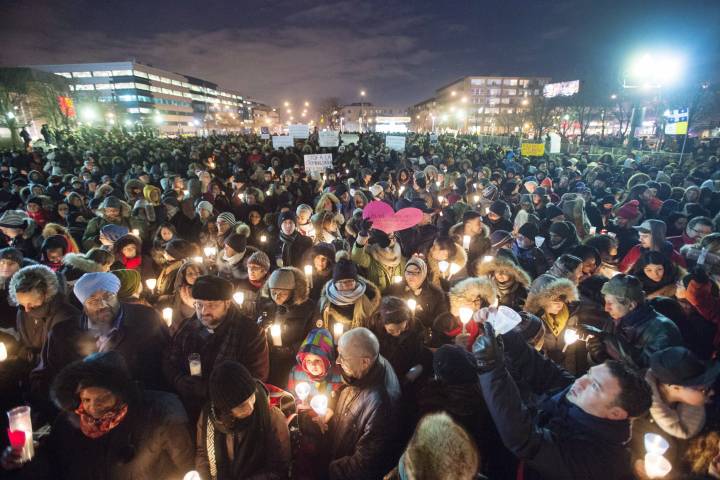 For years, police-reported hate crimes in Canada were inching up slowly.

That all changed last year —  police-reported hate crime rose by nearly 50 per cent, much of it driven by incidents that targeted Canada’s Jewish, Muslim and black populations, according to Statistics Canada data released on Thursday.

And the differences are even more stark when you split the incidents between violent and non-violent crime.

Coverage of hate crimes on Globalnews.ca:

Among religious groups, Jews were the biggest targets for hate crimes — they were victims in 360 incidents last year.

Hate crimes grew for both populations.

Muslims, meanwhile, were targeted in an additional 210 incidents, for an increase of 151 per cent.

There had been considerably more incidents targeting Jews than Muslims in previous years. That gap narrowed dramatically in this year’s data.

Most of these incidents involved non-violent offences. But Muslims were a more prominent target when it came to violent hate crime.

“Uttering threats” was the most prominent violent offence that Muslims faced last year, with 61 incidents, while Jews faced 22.

Hate crime reports for incidents involving Muslims jumped there in February 2017, the month after six people were killed at the Islamic Cultural Centre of Quebec.

Incidents reported in that month accounted for over a quarter of all incidents targeting Muslims in the province last year.

There were 184 reported hate crimes targeting Muslims in Ontario — but there were more incidents targeting Jews in that province (209).

People gather to observe a candlelight vigil in Toronto, on Monday, January 30, 2017, for victims of the shooting at a Quebec City mosque.

All of this happened as hate crimes targeting religion grew by 83 per cent.

Such incidents accounted for 41 per cent of all hate crimes in 2017, up from 33 per cent the previous year.

In a statement, the National Council of Canadian Muslims (NCCM) said it was “deeply concerned” by the statistics.

“The data, while very unsettling for our communities, unfortunately does not surprise us,” NCCM executive member Ihsaan Gardee said in the statement.

“2017 was an immensely difficult year for the Canadian Muslim community, beginning on Jan. 29 with the single largest Islamophobic attack in Canada’s history, in which six men were brutally murdered and many others injured while worshipping in their Quebec City mosque.

“This new data reveals anti-Muslim hate crimes peaked in February 2017, signalling that the shooting very much set the tone for the increase in hate crimes against Muslims for the remainder of the year.”

In a separate release, the Urban Alliance on Race Relations (UARR) noted that, in the wake of the Quebec City shooting, there were a series of anti-Muslim rallies that gathered in response to a federal motion known as M-103, which called on federal politicians to condemn Islamophobia.

“Sadly, it is no surprise that hate crimes against Muslims rose so dramatically last year,” Mohammed Hashim, board member with the UARR, said in a statement.

People hold up a signs during a demonstration to oppose motion M103 in Montreal, Saturday, March 4, 2017.

The Centre for Israel and Jewish Affairs noted the increase in hate crimes targeting Jewish people, but also against black, Arab or West Asian and LGBTQ+ populations.

CEO Shimon Koffler Fogel called on the federal government to undertake three steps: to expand the Security Infrastructure Program, to come up with a national strategy to fight hate on the internet and to “strengthen the capacity of law enforcement to combat hate crime.”

“This should include enhancing legal tools to deal with hate speech and supporting the creation of local hate crime units where they are lacking,” Fogel said in a statement.

Religion wasn’t the only ground upon which people were targeted for hate crimes.

Hate crime incidents targeting people for their sexual orientation also increased by 16 per cent in 2017, hitting 204.

Police stations provide crime data to Statistics Canada, which helps them generate reports like this one. 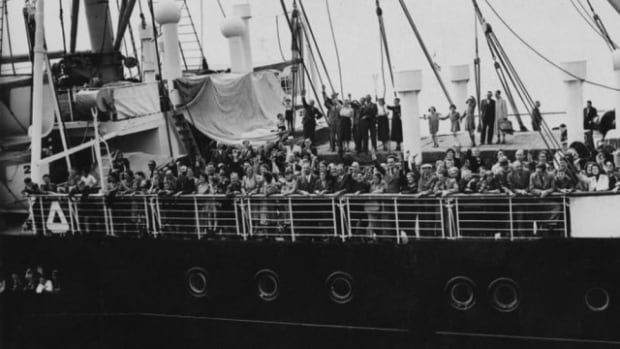 After question period in the House of Commons today, Prime Minister Justin Trudeau will formally apologize on behalf of the Government of Canada for the 1939 decision to turn away a ship full of German Jews seeking refuge from the Nazi regime.

The prime minister will begin by reviewing the decision by the Liberal government of William Lyon Mackenzie King to turn away the MS St. Louis and its 907 passengers seeking asylum, before moving onto how the government of the day strengthened its anti-Semitic policies.

After apologizing to the passengers of the MS St. Louis, Trudeau will extend his apology to all Jews affected by Canada’s anti-Semitic policies.

Trudeau also will pledge to do more to help protect places of worship in the wake of the gun attack on the Tree of Life synagogue in Pittsburgh that claimed 11 lives.

Sol Messinger is one of the few remaining survivors of the MS St. Louis; he marked his seventh birthday on board the ship. He will be in Ottawa today to witness the apology firsthand.

In 1939, the MS St. Louis left Germany carrying 907 Jewish passengers fleeing persecution by the Nazi regime. The ship was turned away from Cuba and the United States before a group of Canadians tried to convince Prime Minister King’s government to let it dock in Halifax.

The Canadian government heeded the anti-Semitic sentiment abroad at the time by severely restricting Jewish immigration. From 1933 to 1945, only about 5,000 Jewish refugees were accepted because of Canada’s discriminatory ‘none is too many’ immigration policy.

When Ottawa refused to let the MS St. Louis passengers disembark, the ship returned to Europe.

About half the passengers were taken in by the U.K., the Netherlands, France and Belgium. About 500 of them ended up back in Germany, where 254 were killed in concentration and internment camps.