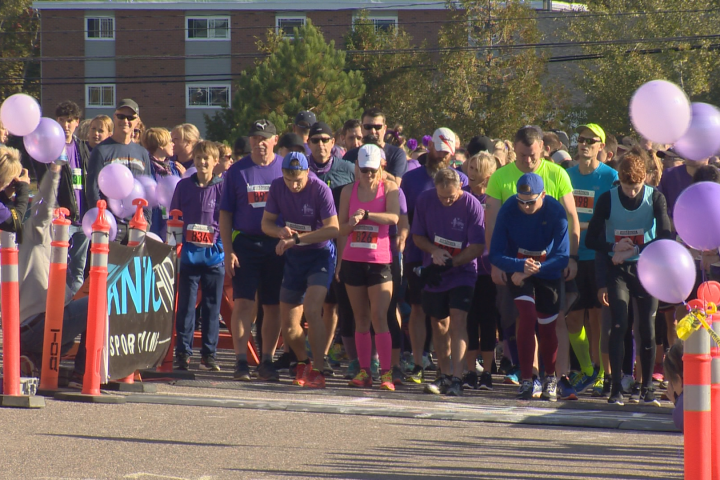 Runners and walkers of all ages came out to honour a 14-year-old New Brunswick girl who died as a result of anaphylaxis.

The Sweet Caroline Run 2018 saw an estimated 750 people head out to Rothesay High School to take part in the event.

Lorette passed away after a severe allergic reaction to food she consumed in 2014.

Since then, the Sweet Caroline Foundation was established, raising awareness about allergies and anaphylaxis.

“Just be aware of people out there that do have allergies,” said David Lorette, Caroline’s father. “It’s not just a matter of a stuffy nose, and that it can be life-threatening and we certainly learned that it is life-threatening.”

David Lorette, Caroline’s father says raising allergy awareness is an important way to carry on the legacy of his daughter

There are already awareness and education programs in place in schools within the Anglophone South School District. The goal is to partner with the province to grow the campaign.

“We can make New Brunswick the most allergy-friendly and aware province in the country,” said Lorette.

A national campaign is set to launch in 2019.

After the run, a cheque for $25,000 was handed over to the Sweet Caroline Foundation.

And aside from the awareness, it’s clear that Caroline had a major impact on the community.

“We grew up with this family in the neighbourhood,” said family friend Krista Jones. “Our children grew up together. We camped together. [Her loss] is a total hole that’s missing in all our lives.”

“It’s a great cause in support of a lovely young lady who was a wonderful friend of our family,” said Craig Maguire.

Despite the tragedy, those taking part in the run are pleased with the efforts of the family and foundation.

“It’s really important for us because you can walk, and Caroline was a sweet girl,” said Hunter Steeves. “She’ll be remembered up in heaven.”​

Hunter Steeves (left), alongside his brother Luke, took part in the run

More details and information about the foundation can be found at sweetcarolinefoundation.ca.