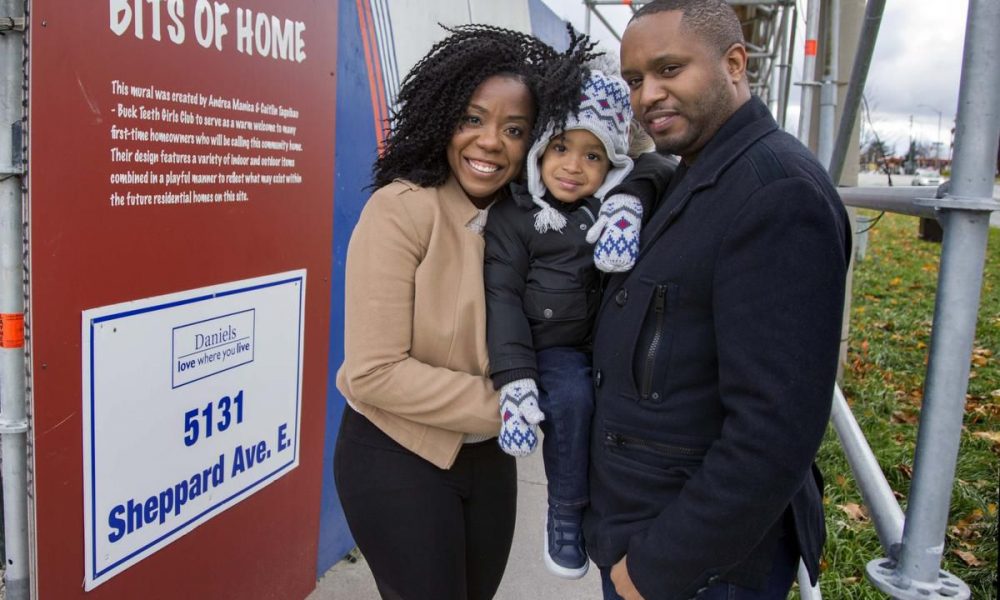 Being debt-free is a point of pride for Anthony and Vanessa Mitchell. Determined to become homeowners, the Toronto couple have done what many people find nearly impossible by paying off $22,000 in debt, including $12,000 in student loans, since they got married four and a half years ago.

“We love our zero balance,” said Anthony, 30, a curator with a music streaming service.

“We knew we would buy something but we just didn’t know when. Obviously we would want to have a house right away or something to call our own but we also were realistic about the fact that we had our debt,” he said.

Their ambition hardened after their son Elijah, now 2, was born.

Then, in life-altering happenstance, the Mitchells heard from a family member about an affordable housing program offered by Daniels Corp. designed to help families who couldn’t otherwise afford home ownership to step onto the property ladder.

Under the FirstHome Boost program, the builder uses federal and provincial housing supports to provide qualified applicants with interest-free loans for pre-construction homes worth 10 per cent of the purchase price — in essence a silent second mortgage. That money only gets paid back if the purchaser sells the home.

The program means purchasers don’t need to have a full 5 per cent deposit when they sign for their home. They gradually pay the deposit in the time it takes between agreeing to buy the pre-construction home and taking occupancy. If there are construction delays and the buyers have reached their 5 per cent deposit, they are able to save toward their mortgage in the intervening time.

Unlike a lot of their friends, the Mitchells didn’t have access to the “bank of mom and dad.”

“Our parents couldn’t afford that,” said Vanessa, 31, a youth program co-ordinator. “Both of us worked our way through school, paid for our wedding and there were no extra funds to put down on a place.”

The Mitchells are typical of the families that Daniels targets with programs like FirstHome Boost, said Martin Blake, vice-president and the company’s point person on affordable housing.

“They’re the employees the city needs to be able to be able to operate. They’re hard-working people who generally have two incomes, they’re working as many hours as they can to be able to make ends meet,” he said.

“We’ve had so many nurses, teachers who’ve come in and say they have great steady income but, ‘I don’t have someone to lend me money and I need this to help me become a homeowner,’” Blake said.

He figures that over its 34 years of business Daniels has built about 30,000 homes in the Toronto area and its affordable housing programs such as FirstHome Boost have helped about 3,000 families become homeowners.

The Mitchells are purchasing a 935-square-foot, two-bedroom condo at Markham Rd. and Sheppard Ave. E. for $485,000. It is one of about 100 affordable units that look just like any of the others in the 340-home development.

Advertised online as a “Scandinavian-inspired boutique six-storey condominium residences and townhomes,” the project is being built in two phases with homes ranging from studios to three-bedrooms.

FirstHome Boost buyers get first dibs on the condos that won’t go on sale to the general public until next year, Blake said, adding the company doesn’t begin selling to anyone before the project has broken ground.

“It’s a scary thing to become a homeowner. Usually it’s the largest investment you’ll ever make in your life. What you want to do is give certainty to people so that they can actually feel that this is something that’s going to happen,” he said.

Unlike old grant-based housing assistance plans, modern programs rely on tools such as silent second mortgages and rent-to-own scenarios — payback programs that give a hand up on one of the biggest barriers buyers face — saving for a down payment — but also help another family, Blake said.

Finding qualified buyers for the affordable units requires casting a wide net, he said. The income qualifications — at the moment they top out at about $89,000 — are stringent. The applicants must be renting and must also qualify for a mortgage.

They might make enough money but have too much debt to get a mortgage. Another family might really need the program but their income is $100 over the maximum allowed under the federal-provincial program rules. The rules are applied rigorously because the last thing anyone wants, he said, is for the money to go to someone who doesn’t need it.

Sometimes home ownership is a years-long process. Blake cites a buyer who approached the company in 2007 and didn’t become a homeowner until two years ago.

That’s an extreme case but programs like FirstHome Boost require a greater time investment than a typical visit to a sales centre.

“Generally someone has met with us probably between five to 10 times before they actually sign an agreement of purchase and sale. They probably are going to spend in the neighbourhood of eight or nine hours over a period of time,” Blake said.

For the Mitchells, it was worth the time and they said they took to heart the advice of the Daniels’ representative and a bank adviser with whom they were paired.

“They explain all the financial stuff, which is great because people like us, this is our first time owning property. It can get really confusing,” Vanessa said. “You have the Daniels representative plus you have the (bank) person that you’re partnered with. They give you the advice leading up to it — what it’s going to take.”

They made an initial payment of $7,000 and are now paying about $1,000 a month toward the required 5 per cent down payment.

“It’s basically to help you get into the market so you can build equity and get on your feet,” Vanessa said. “We’re just really thankful.”