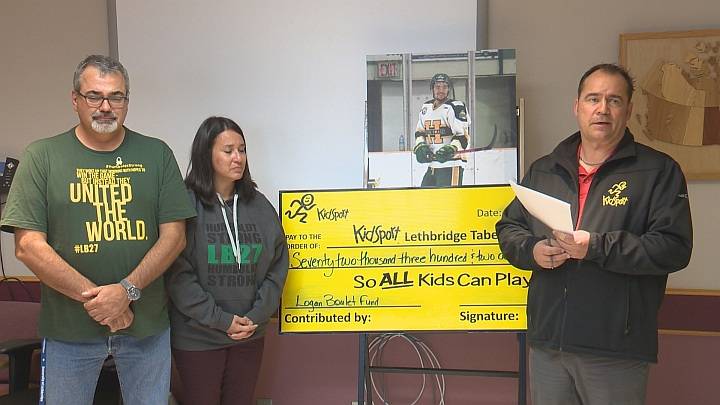 The Logan Boulet effect continues in Lethbridge, where the local KidSport chapter was presented with more than $70,000 as part of a fund honouring his memory on Thursday.

The fund was first established by Boulet’s parents as a way to keep his spirit and love of sports alive while creating opportunities for more children to participate in athletics no matter their family’s financial position.

Boulet was one of 15 people killed on a Saskatchewan highway when the bus carrying the Humboldt Broncos hockey team collided with a semi-truck. Fourteen others were injured.

Just after the collision, the 21-year-old defenceman was put on life support in hospital. But days later, he was taken off life support and his organs donated to science, as well as six people in need.

He had just signed his donor card a short time before he died, the family told Global News.

Boulet’s parents, Toby and Bernie Boulet were both in attendance to share the special moment.

“Logan gave lots to the community, and so does our daughter Mariko and so do ourselves and coaches and everyone,” Toby Boulet said, “To us, to have Logan, his name, to give back to other children, is huge for us.”

“Kids need to be out, they need to be active, and be part of a team,” Bernie Boulet said. “That’s just part of growing up that everybody should have the opportunity to do.”

“Having known Logan, and having coached him, I know that he had a true understanding and appreciation of what sports can do for young people,” KidSport Executive, Jonathan Dick said.

— With files from Heide Pearson