People who love to cook and drink already have the basics: a good chef’s knife, a solid cutting board, and a Dutch oven that will last for life. Treat them to these next-level presents they’ll fully appreciate but probably never buy for themselves.

In our new series Person of Interest, we talk to the people catching our eye right now about what they’re doing, eating, reading, and loving. Up next, ‘Night School’ actress Megalyn Echikunwoke.

Social media can be a mind-boggling place with an overabundance of homogenous feeds, meticulously curated with hints of millennial pink and gold-accented marble. So when we stumble on an account that’s full of pics from a person’s real life (like, actual real life), it’s a real breath of fresh air.

Actress Megalyn Echikunwoke is that breath of fresh air.

Echikunwoke, whose long resume includes roles on hit TV shows House of Lies and Mind Games along with the recently released movie Night School, uses her platform to speak her mind. “I have something to say, I have a point of view, these are my views, and if it means something to you then great, and if not, that’s fine also,” she says of her Instagram account. “If I can say something that has an impact a thing that’s important to me, then I’m super happy,” the Echikunwoke says.

It’s clear talking to Echikunwoke that she’s extremely thoughtful about everything she does, including her acting work. She equates being an actor to being an anthropologist: “The people around you are what feed your work. Getting as much as you can from all different kinds of people only adds to your creative arsenal,” she says. We talked to Echikunwoke about how she approaches wellness, travel, and even her beauty routine.

My career highlight so far has been… Playing Claire in Alexi Kaye Campbell’s Apologia. It’s my stage debut, and that has been something I’ve wanted to do for a long time, so that’s really exciting.

For me, wellness is… a very individual thing. I think a way to wellness comes from really listening to your body, understanding how to keep yourself healthy, and, as much as you can, taking preventative measures to support your body. I think doing something that you love is a form of being well.

I’m obsessed with… dancing, especially ballet. Dance is a foundation of my fitness routine. Anywhere I am, I try to make sure I’m as close to a dance studio as possible, and I think I’ll probably practice or study ballet until I’m 80 years old. At least, I hope so.

I feel my best when I’m… consuming art, and lots of it. I’m always at the movie theater, I’m always seeing Broadway shows, off Broadway shows, dance performances, concerts—it’s how I feed my soul creatively. It’s very therapeutic, meditative, and healing for me.

The only diet I abide by is… no diet. I hate food bullies, and I hate having to label my diet all the time. I’m not one type of eater—I just eat what makes me feel good. I try to maintain my blood sugar, but thankfully I don’t really crave sweets and am totally happy not having dessert.

But when I do indulge I go for… coffee. I definitely need a lot of coffee every day. I’ll also indulge in an alcoholic drink every now and again.

One thing you probably don’t know about me is… I love making my own beauty products. I make a body scrub with sugar, because salt can dehydrate your skin. I use a lot of lemons to break down the sugar in the scrub before I add the oil. And I always make sure to travel with the scrubs and masks that I whip up.

Growing up in northwest Arizona taught me… to explore the world. I grew up in a really remote place with a rich, beautiful culture, and I think that had a huge impact on my love of traveling. Also, my mom was really wonderful about making sure that we traveled as much as we could. We didn’t have a lot of money, but she always made sure that we got to go somewhere for the summer, or we would go camping. She made the most of it.

I’m most comfortable when… I’m uncomfortable. I like to be figuring stuff out, and I like being lost in a city. That’s also why I love traveling so much.

One piece of advice I’d give young people is to… stay curious. And, ultimately and above all, remain compassionate and try to find compassion for yourself and others. 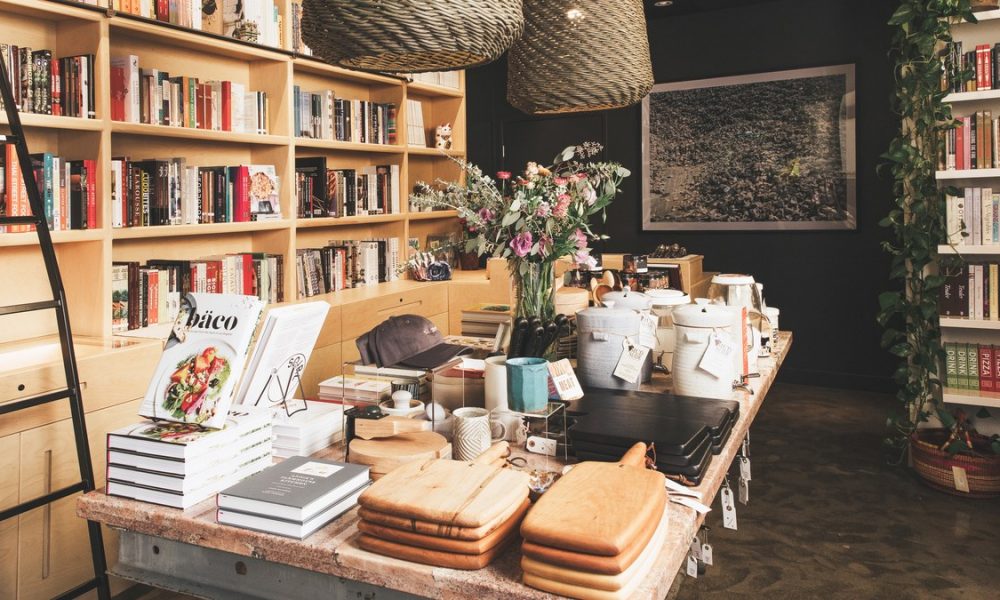 The new joint that every out-of-town chef hits up when they’re in Los Angeles? Now Serving, a well-curated cookbook and ceramics shop run by former Cut chef Ken Concepcion and his wife and make-up artist Michelle Mungcal. In a little over a year, the couple has made their homey boutique a destination.

“My friend said this is like Other Music but for food,” Concepcion says. “We were going for an ’80s/’90s record shop vibe, where you can have a conversation with your guests. It’s not just ‘here’s a book.’ We want it to be an extension of hospitality, where chefs, cooks, and home cooks can feel at home.”

Whether it’s stop no. 5 on a nationwide cookbook tour or a refuge for hard-to-find, out-of-print vintage cookbooks and indie food magazines, it’s drawn a crowd of food lovers with an emphasis on books people will actually cook from. As you peruse the shelves of chef zines and tables stocked with otherworldly ceramics and Japanese dyed cloths, you’ll run into chefs like Roy Choi, also in search of the next cool thing in food. Here, Concepcion and Mungcal explain how they channel their love of books into a business.

So, how’d you get into cookbooks?

Ken Concepcion: After college, I got an entry-level job at the Library Ltd. in St. Louis, MO, the second largest independent bookstore at that time. I used my employee discount to buy cookbooks by Charlie Trotter, Jacques Pépin, Jean-Georges Vongerichten, and Nancy Silverton. This was in the ’90s, pre-Internet, so it was the only way to learn about these chefs. I was a painting and English major, so I would read cover to cover, then go back and look at the recipes. That’s when I fell in love with cooking and started working at restaurants.

What made you decide to open a cookbook shop?

Michelle Mungcal: Honestly, it was because we were at a crossroads two years ago. Ken was just promoted to chef de cuisine at Cut, but we wanted to start a family. I knew if I made him leave the restaurant world, he’d be miserable. So, we starting thinking about a cookbook store since Ken has such a significant collection.

KC: Also, Cook’s Library closed in 2009. I realized L.A. really needed a place where the cooking community could not only pick up a book or find a nice ceramic bowl but share ideas. Whenever I traveled to New York City, I would always go to Kitchen Arts & Letters. Same with San Francisco and Omnivore Books on Food. Once I got back home, it was so frustrating for me as both a cook and book lover that L.A. didn’t have its own place. It wasn’t just me. Before we opened, chefs would have to do their cookbook launch at big-box stores, like I remember when Daniel Humm did a cookbook signing in a mall. It felt weird.

What’s the story behind the name, Now Serving?

MM: My sister and I brainstormed for months. We’d always pretend to answer the phone, thinking, What will we get tired of saying over and over again? Now Serving seemed to work.

KC: We also wanted something with a little bit of intrigue and mystery. We didn’t want “Ken and Michelle’s Books.” Now Serving holds this idea of immediacy and hospitality.

What did you know you had to stock once you opened?

MM: Vintage cookbooks, since that was part of Ken’s education—copies of La Technique, David Thompson’s Thai Street Food, books by Diana Kennedy. Food zines that other chefs tell us about, like Compound Butter. And ceramics (I have an addiction to Minh Singer’s Iceland dishes.) At any given time, we have 1,500 books in the shop, plus JB Prince tweezers and MudSlide Stoneware fermentation crocks.

KC: We ask ourselves: “Do other cooks have this?” “Would this be in a restaurant’s office or on a chef’s cookbook shelf?” We’re not going to have appliance-driven or diet-driven books or something that someone can just order online. We encourage a sense of discovery with the shop. We want it to make sense. We’re not selling garlic presses.

MM: I love my garlic press!

Of all the fall cookbook titles, which ones are you most excited about this season?

KC: So many. Michael Solomonov and Steven Cook’s Israeli Soul. Matty Matheson: A Cookbook—he’s a cook’s cook. A Very Serious Cookbook by Jeremiah Stone, Fabian von Hauske, and Alison Roman and Estela by Ignacio Mattos and Gabe Ulla both look very cool. Jonathon Sawyer is all about vinegar, so I’m excited about his cookbook House of Vinegar. There’s also Mastering Pizza by Marc Vetri and David Joachim, the new Joe Beef cookbook, the new Dead Rabbit book, Let’s Eat France, Bong Appetit, All About Cake by Christina Tosi, and I Am a Filipino by Nicole Ponseca and Miguel Trinidad. I’m also really interested in the Bestia cookbook because the restaurant is such an institution here in L.A. and it will be a real showcase of what chefs Ori Menashe and Genevieve Gergis do. Probably one of the big ones is going to be The Noma Guide to Fermentation since René Redzepi hasn’t put out a book out in four or five years. As a chef, it blows me away that home cooks are obsessed with it too.

What’s next for you guys?

KC: That’s the million dollar question. We’re planning to open a luncheonette next door to Now Serving. We’re thinking a classic American luncheonette with tuna melts but also more vegetable forward dishes. After working with Wolfgang Puck for 12 years, I’m obsessed with the farmers’ market and I want to showcase their great work.