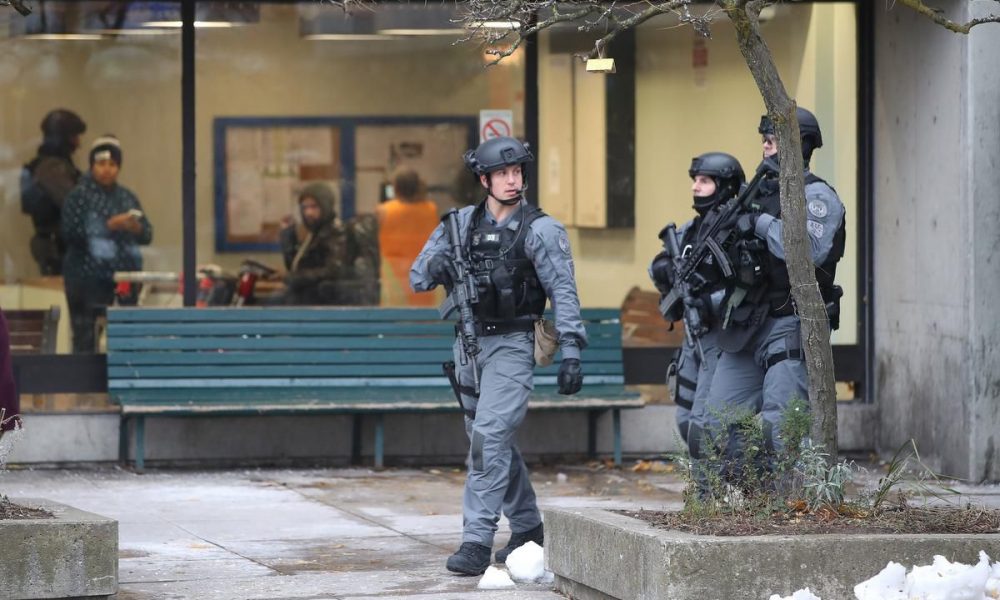 A scraping bow, as yet another body was added to the homicide heap.

It was only a matter of when, of course, with six weeks left in 2018. But the kill count had stalled for a while — four mercifully murder-free days passed between No. 89 and No. 90.

And some three full weeks without a homicide recorded before No. 89.

“I don’t know if that’s a sign we’re going to slow down,” acting Insp. Hank Idsinga, head of the homicide squad, told the Star Sunday night, confirming the murder, sounding more weary than hopeful. “But we’re on a 100-pace over the past 12 months.”

It had been a death watch over recent days, waiting for that shoe to drop.

A beating near Moss Park on Friday evening, the male victim apparently stabbed as well, but he’s hanging on in hospital, listed as critical.

Then, around 8:30 Sunday morning, discovery of a deceased male on Shuter St., in front of Haven Toronto, a drop-in centre for homeless men. An orange tarp had been laid over the corpse but there was little police activity in the area and it was soon made clear this wasn’t a homicide. Just another dead guy in the street and there have been plenty of those in this city.

Four hours later, emergency services responded to reports of gunshots at an apartment building near Lawrence Ave. E. and Kingston Rd. Paramedics found a male suffering from apparent gunshot wounds, pronounced dead at the scene. Officers found a clutch of shell casings inside.

Members of the Emergency Task Force drove up to the 13-storey building, lights flashing, at around 3 p.m., and entered with guns drawn. As of Sunday night, no charges had been laid and the victim had yet to be identified.

It never really signified much, except symbolically, that four-score-and-ten figure, overtaking the record set in 1991 when Toronto was in the grip of a gangland feud. The inevitability of rising to a new threshold of murder — inflated by 10 killed in April’s van rampage along north Yonge St. — has been part of the grim conversation for months, triggering memories of the Year of the Gun: 2005, when gun-related homicides soared to a record 53 out of 80 murders.

Half of this year’s murders have been shooting fatalities, clustered largely around defined urban neighbourhoods, the more worrying aspect — whether resulting in death or not — of multiple shots fired from multiple guns, sometimes in running gun battles; out in the open, daytime, nighttime. Brazen and utterly heedless of innocent bystanders.

Last Wednesday, as Det. Sgt. Mike Carbone told reporters, four guns had been fired, an unknown number of shooters blasting away at each other — between 10 and 20 rounds — on a quiet street near Weston Rd. and Hwy. 401, a pocket of the city not known for violence. A fifth gun was found beside the slain victim, 22-year-old Yohannes Brhanu, in the driver’s seat of his car.

“That was an example of the proliferation of firearms,” said Idsinga. “More guns, more shootings. That’s what we saw in 2005. It’s not just one person in a group who might pull out a gun; it’s several people and they’re shooting at each other. That’s how innocent people get killed.

What that says about Toronto, in 2018, would be speculation and probably not fair, based on emotion more than statistics, as dismaying as those may be.

Police are leery of conjecturing about patterns or trends or motivation, although gang activity and drug turf seem common denominators.

“I don’t want to mark it down as gang-related because that would be giving these guys too much credit,” said Idsinga. “What I’d say is a group of individuals potentially from a common area, neighbourhoods where they’ve grown up and become engaged in criminal activity, and then rival groups going after each other leading to more shootings getting back at each other. It spirals.”

The resulting mayhem is predictable, blood splashed across the city. Idsinga points out, however, that the solve rate, for this year at least, has been relatively high at about 70 per cent, if fluctuating. “I wouldn’t say these gun murders are getting easier to solve but we’re getting a lot more feedback from the public. Homicides are very labour-intensive but the technology is better now. There’s a lesser reliance on eyewitness evidence, more little pieces of the puzzle we can fit together.”

There’s not a great deal of solace to be taken from the fact, often raised by the mayor and policing officials, that Toronto remains a tremendously safe metropolis, compared to American cities of the same size. “It’s a large city and really, on a per capita basis, (90) is not really an outrageous number,” said Idsinga. “Still, we shouldn’t have 90 people killed on the streets of Toronto. Even 10 homicides is unacceptable as far as I’m concerned.”

The homicide surge can be placed on a graph tracked from September 2017. “The pace picked up last September and it’s never gone down,” said Idsinga.

Equally alarming is the number of shootings: 362, as the sun rose Sunday.

It feels closer to home, even when it isn’t. It feels overwhelming, a danger that lurks down every street, in playgrounds, at dense housing complexes, in malls, around schools, in lively entertainment districts, in the quiet of the night or in broad daylight.

“People are fed up,” agrees Idsinga. “Frustrated and a little bit scared.”

Except you can’t live your life that way, seized by dread, too fearful to walk around at night, barricaded behind triple-locked doors, eyes down.

That’s not who we are.

That isn’t Toronto, even on its darkest of days.