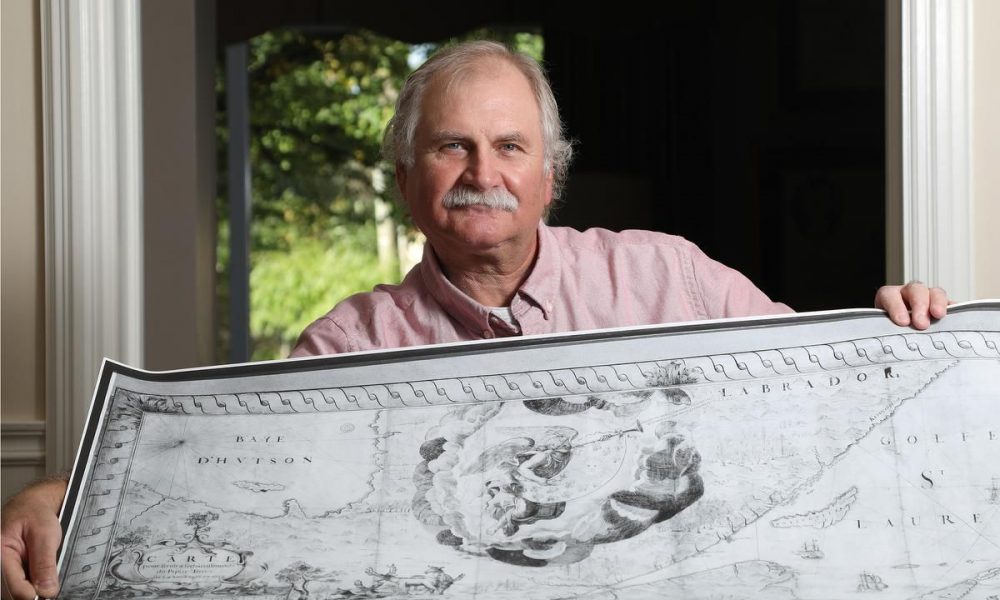 Rick Laprairie has always been enchanted by the stories that old maps tell. His recent discovery has been his most exciting to date: a “cartographic birth certificate” for Toronto that dates to 1678 — the earliest known appearance of the word on a map, he writes in an upcoming Ontario History article.

Laprairie had been trying to show the evolution of Toronto’s geography and name, and he kept “bumping into” a map by Jean-Baptiste-Louis Franquelin. It was a survey of land grants made to soldiers along the St. Lawrence River when the French were still a colonial power. The map was dated 1678 and showed the outline of eastern Canada, but it also featured drawings of woodland animals, Indigenous men, an angel blowing a horn and Louis XIV’s face radiating sun rays, right on brand for the Sun King.

The map was made “in that decade where the name Toronto was starting to appear,” and Laprairie wondered about the handwriting on what is now known as Lake Simcoe.

The Toronto researcher studied the map on the website of the Bibliothèque Nationale de France, but he couldn’t make out the writing. Frustrated, he ordered a high-resolution digital copy.

When it arrived in his inbox, he zoomed in below the decorative beavers grazing north of present-day Orillia. He saw it: “Tarontos Lac.”

“I just about fell out of my chair,” he says. “It was incredible. Because of the work I had been doing, I knew full well that this was the first time the name had been used on a map.”

“Tarontos” was the French take on “Tkaronto,” an Indigenous word referring to the fishing weirs they had used for thousands of years where Lake Simcoe empties into Lake Couchiching. Kory Snache, a member of Rama First Nation and a guide with Indigenous tour group First Story Toronto, thinks the word was in common usage in the 17th century.

“At the time Tkaronto is really well known because it carried all the way down the portage route to what is now Toronto,” Snache says.

“As a point of interest, the narrows was a strategic position for communication, transportation, trade, economy, everything,” he says. “You had to go through there, so that was why it was such a big part of history.”

In cartographic research, there have been differing accounts of when variations of “Toronto” first appear on a map. Laprairie calls it the “maps muddle” and says that he spends a lot of time debunking and clarifying the matter in his upcoming article for the fall 2018 edition of Ontario History, the journal of the Ontario Historical Society.

He said many maps of the era weren’t dated or signed. “We don’t necessarily know who made them and when, unless we look at things like handwriting and what places are on the map and not on the map.”

Past scholars have pointed to three maps believed to have been created in the early 1670s that featured a variation of “Toronto.” But Laprairie says that further academic research “reattributed” the maps to different cartographers at later dates, circa 1680 and 1700.

“The dilemma was that few people have paid attention to that,” he says.

The 1678 map by Franquelin shows land grants for French soldiers of the Carignan-Salières Regiment who had been sent to New France to “ensure the safety of the colony” and “deal with the Iroquois threat,” according to Library and Archives Canada. The Iroquois had attacked and decimated the French allies, the Huron-Wendat, in the 1640s. The attacks may have “been prompted by the epidemics that devastated Aboriginal communities in the 1630s,” Library and Archives notes on its site about the regiment, as war was a way for the Iroquois “to replace members who had died.”

Laprairie’s neighbour has a PhD in Latin and translated the words trumpeted by an angel at the top of the map: “The French fleur-de-lis flourishes in the midst of the forest.”

“That’s the entire key to the map, because what it shows is an array of French names all along the St. Lawrence … and, in the other portions of the map, you’ve got some beautiful drawings of all sorts of deer and moose, and beaver, and so it really tells the story, that here you have a French occupation in a very productive forest land,” he says.

The map is known among researchers, but not for “Tarontos Lac.” Because of the resolution, you’d have to see the map on site or order a high-resolution version.

Laprairie spent his career working for Ontario’s Ministry of Natural Resources in land use planning and as an environmental assessment policy analyst. His historical interest in maps was piqued many years ago when his wife gave him a copy of a map of New France in 1703. He became enthralled with the hobby.

“There is just so much more to learn and discover when you go back to some of these documents, and some of the early accounts of the exploration and the discovery of the Great Lakes,” he says.

Needless to say, reproductions of old maps feature prominently in his home decor.

“We were once preparing to go out for a Sunday afternoon drive and trying to think of where are we going to go, and my wife looks around and says, ‘Don’t we have any good maps in this house?’” he says. “We do tend to be a quirky bunch, map collectors.”