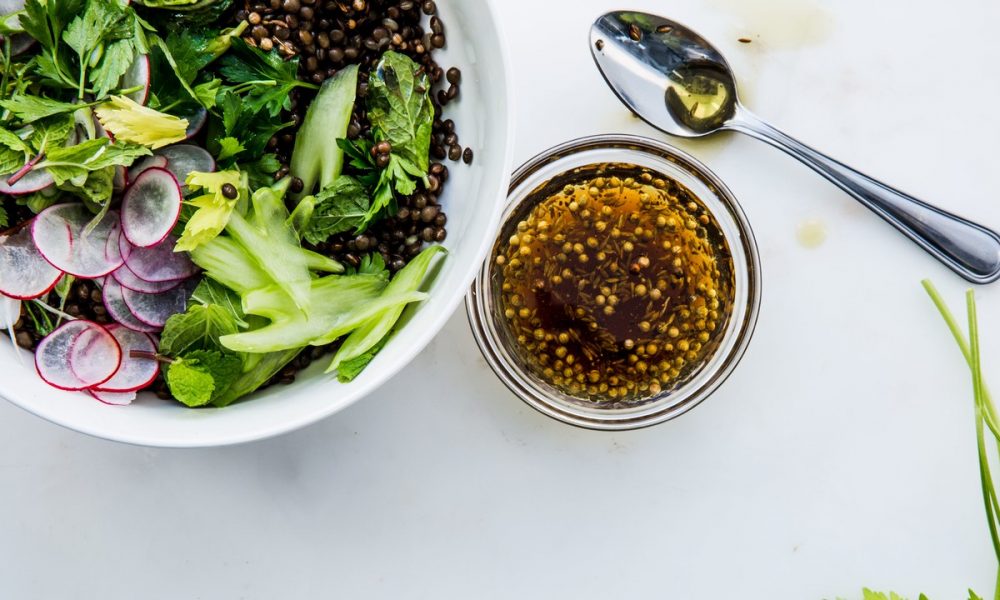 Being a vegetarian doesn’t mean subsisting on steamed broccoli and bowls of pasta. In her monthly column, nearly lifelong vegetarian Sarah Jampel will tackle cooking, eating, and navigating the world meat-free—even when her grandma still doesn’t know what she makes for dinner.

As a vegetarian, I’m constantly on the lookout for easy, protein-rich accompaniments that will lend a semblance of balance to my meals and, most importantly, ward off hunger for a reasonable amount of time.

On the most desperate nights, that’s a spoonful of peanut butter or exactly seven almonds (OMG, remember the good times???). But on the best nights—and when I’ve done even minimal meal prep over the weekend—it’s a mound of marinated lentils. “Marinated lentils” is just a fancy term for cooked lentils (beluga or Le Puy) tossed with olive oil that’s been infused with all sorts of delicious spices, aromatics, seeds, and hard herbs (rosemary, sage, thyme). Claire Saffitz’s recipe takes a minimal approach—heat oil with coriander and cumin seeds for a minute—whereas Alison Roman’s Spiced Lentils with Spring Onions in Dining In pull out all the stops: The oil is heated on low for 20 to 25 minutes with coriander, fennel, and cumin seeds, red pepper flakes, and slice garlic; strips of lemon peel and scallions or spring onions are added for the last 5 minutes. You can vary the oil infusion—as spicy or herby or lemony or garlicky or seedy—as you’d like.

Marinated lentils are better than regular old boiled lentils because they, uh, taste better. (And they’re better than marinated dried beans because they cook so much faster.) I understand and abide by the concept of adding a halved onion and a couple bay leaves to the lentil cooking liquid, but it never seems to impart enough (if any) flavor. Oil, on the other hand, is a much more effective flavor-carrier: Even a couple tablespoons of infused oil will transform lentils into something I’m ready to spoon directly into my mouth, no enhancements necessary. Marinating lentils doesn’t take any additional time: Just heat the oil as the lentils cook, then toss the two together, and eat. If you have any leftovers, that’s even better: Let the lentils hang out in any extra oil and they’ll get even better in the fridge over the next few days.

So when my dinner ends up looking like a collection of what other people might call sides, I make these lentils. They’re as good on their own as they are tossed into a leafy salad, nestled onto a sweet potato, or mixed into cook grains with herbs and cheese. The added fat from the infused oil makes the lentils rich and luxurious and improves anything plain-ish that you toss with them. If I’m really on my game, I’ll double the spiced oil and keep it in a jar in the fridge, turning to it whenever I’m sautéing greens, frying eggs, roasting broccoli or squash or cherry tomatoes, stirring together a lemony yogurt sauce, or making a vinaigrette.

If you’re reading this, you’re alive. But if you’re not taking advantage of nature’s most underrated legume, are you really living? 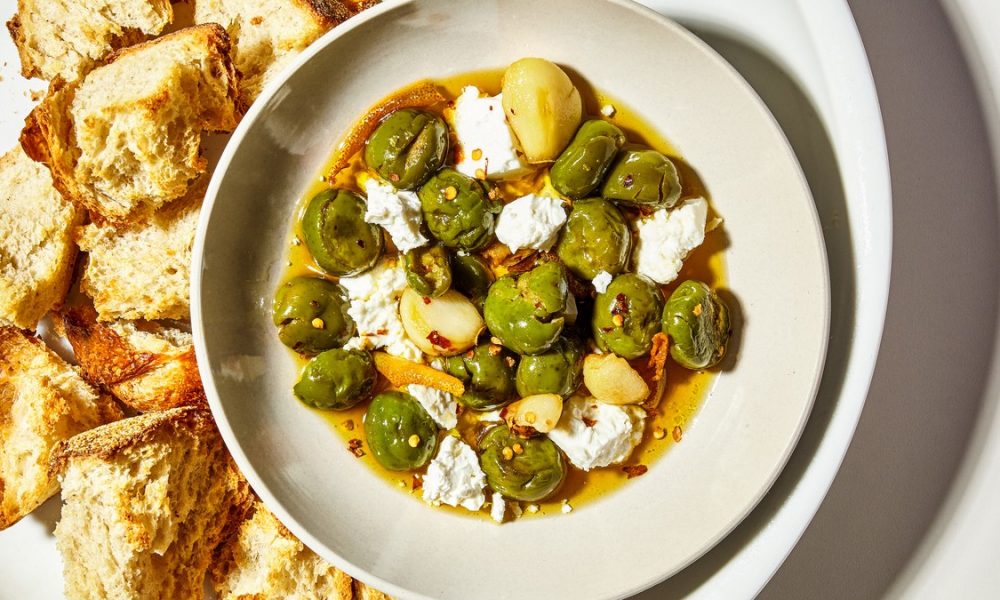 There’s a lot of hype around New Year’s Eve. Old habits (supposedly) give way to resolutions. Filmmakers organize the climax of movies around ball drops and choruses of “Auld Lang Syne.” When I was 17, I got asked to senior prom—very awkwardly—on New Year’s in my friend Lexi’s living room. But these days, my year-end traditions are less grandiose. All I’m looking forward to is plenty of sparkling wine, a good sequined top, and these marinated olives with feta—the snack to end all snacks (or, at least, the best snack to end the year).

Here’s my recipe for a great night. In typical New York City fashion, around two weeks before the 31st, your best friend, your colleague, your roommate’s boyfriend, and the girl from your yoga class will all send competing Google Calendar invites for their respective New Year’s parties, which all happen to be conveniently spread across the city. You don’t know which one(s) you’ll go to. You don’t know who you’ll go with, or how you’ll get there. But it doesn’t matter, because you know you’ll be bringing these marinated olives, the easiest snack on the planet to throw together.

It’s beyond simple. First, you smash some Castelvetrano olives (the best olives) with the back of a knife, which breaks them open enough so that the olives will absorb the marinade and the pits will release more easily later on. Then you smash and peel three three garlic cloves, too. (You know what people say about not eating garlic if you’re planning on kissing someone? Well, that rule doesn’t matter if both parties are eating garlic, so the best place to look for a New Year’s kiss just might be right by this olive app.) Then, you’re going to use a vegetable peeler to remove the zest from a lemon in wide strips, which will release their oils when cooked and give the whole dish a subtle, citrusy note. You throw all of those things into a pan with half a cup of olive oil and some red pepper flakes, then turn on the heat and let the mixture warm up for about 5 minutes, just until the garlic starts to sizzle and brown around the edges.

While the olives are getting their fancy olive oil bath spa treatment, you break feta into irregular, bite-sized chunks and place them in the bottom of a bowl or transportable vessel of your choice. We’re springing for the nicer feta here, the kind that comes in brine, rather than the dry, shrink-wrapped stuff. It’ll have so much more flavor and not an overwhelming amount of saltiness. Then the warm olive mixture gets poured over the feta, and bingo bango bongo, you’ve got a bowl of olive-y goodness that’ll ensure the last night of the year is an unmitigated pleasure.

This is a perfect snack to eat on it’s own, with some toothpicks for people who are weird about eating with their hands and a little dish for olive pits, but I like it best with a bunch of bread for soaking up the tasty, tangy marinade. (That bread also happens to be perfect for soaking up a bit too much sparkling wine, just saying.) And there you have it folks: a fancy-seeming appetizer that’s super quick to make, easy to transport, and makes you look like you have your shit together a little more than that pre-sliced cheese plate would. It’s like the song says: Make new friends, keep the old—but feed them all these marinated olives. Or something like that.

What’re you waiting for? Marinate some olives already!