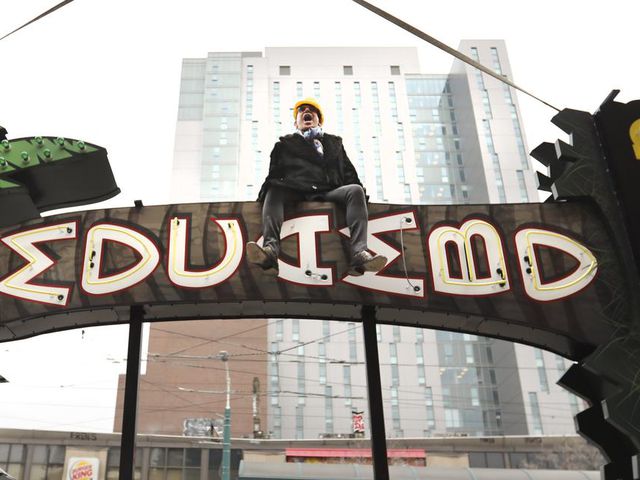 There is, once again, light at the end of the tunnel — or above the front doors, at least — for Toronto live-music lovers eagerly awaiting the rebirth of El Mocambo.

A brand-spankin’-new replica of the El Mo’s iconic “neon palm” sign will be lit on Thursday evening amidst as much pomp and circumstance as rock ’n’ roll will allow, in its familiar perch since 1948 over 464 Spadina Ave. Most of the marquee and the art-deco entryway beneath it are finally restored to their former glory, too. A private party to celebrate the venue’s 70th anniversary will follow.

It’s not the grand reopening of the beloved nightclub that owner Michael Wekerle — the Bay Street financier and former Dragons’ Den star who bought the dilapidated property in 2014 to rescue it from being turned into a computer store — would have preferred. But that’s coming. This time it’s really coming. Just don’t ask him for a date.

“This is where everything’s starting to transform,” said Wekerle Monday, as the 2,300-kg El Mocambo sign — painstakingly recreated in every detail by Cambridge’s Pride Signs, save a few modern-day technical upgrades — was being hoisted into place outside the El Mo construction office. “It’s been very stressful, to say the least, for the last four-and-a-half years. It’s about four times the cost and about three times the time that we should have taken to do it. But you know what? At the end of the day, it was not to be taken lightly because we wanted to bring back the El Mocambo.”

It could be the city’s best-known venue internationally, in fact, as it was the site of some of the recordings found on the Rolling Stones’ 1977 album Love You Live — not to mention a rumoured dalliance between Mick Jagger and Margaret Trudeau, then the wife of then-prime minister Pierre Trudeau. Muddy Waters and Buddy Guy graced its stage when it was predominantly a blues club during the 1970s but, by the time the New Wave era came around, the El Mo would play host to the likes of Blondie, the Ramones and Elvis Costello. U2 was paid $500 to play its first gig in North America there in December 1980.

The club has escaped extinction a number of times. It was declared dead in 1989 and 1991, and bounced back during the late 1990s as a choice underground punk-rock spot under the stewardship of promoter Dan Burke, who actually hosted a Neon Palm Festival in 1999 to relight the original El Mocambo sign.

It was sold again in 2001, got a major renovation that stripped off some grime and it was never quite the same again — the upstairs room briefly became a dance studio — despite still luring Queens of the Stone Age for a memorable gig in 2008. Cadillac Lounge owner Sam Grosso bought the building in 2012, pledging to restore El Mocambo to its “former glory” but the bookings never happened.

It’s actually rather fitting that a replica of the old neon palm will adorn the new El Mocambo because, much like the original sign, the original El Mo was in such rough shape when Wekerle bought it off Grosso for $3.6 million that he essentially had to oversee the construction of an entirely new “building within a building.” It’s more or less a replica of the old El Mocambo itself and, while the space is still pretty raw, you can see it taking shape — especially if you’re lucky enough to sneak a peek at the top-secret renderings for the final product — and the broad outlines are comfortingly respectful of the old layout.

There’s still a smaller room in the 400-capacity range with a stage on the west side of the ground floor, while upstairs a long, wide room in the 600-700-cap range will maintain the stage — which will be flanked by the original El Mo sign, “butterflied” into two halves — in its familiar position in the middle of the north wall, albeit now with a third-floor VIP balcony where the low ceilings used to be. There’s now a freight elevator backstage to spare bands hauling their bass amps up three flights of stairs, too. Oh, and there’s a recording studio overseen by legendary producer/engineer Eddie Kramer and John Storyk, the chap who designed famed New York studio Electric Ladyland, tucked in the corner behind the balcony.

That’s the 21st-century angle on the new El Mocambo: when finished, the entire thing will be “a recording studio that happens to be a nightclub,” as Andy Curran, the one-time Coney Hatch frontman who now heads the nascent El Mocambo Records and El Mocambo Entertainment operations, puts it. Even the third-floor dressing room is wired into the control room on the top floor. It will be a cinch to record, stream or broadcast top-quality audio and video from pretty much anywhere in the building.

“In reality, (Wekerle) has actually built a recording studio,” says Curran. “The whole thing is wired. Each floor is soundproofed. The amount of work that went into soundproofing is, as our production manager says, so crazy that you could potentially have the Dropkick Murphys on the ground floor and Diana Krall playing a jazz set upstairs and you would not hear anything.”

All the technology going into the new venue is thinking ahead of the curve, too. Obsolescence will not be a problem.

“There will be no issues for the next 15 to 20 years” besides any cosmetic updates, says Wekerle, who’s cutting deals that he hopes will make “Live from the El Mocambo” content as familiar as the Austin City Limits or Live From Abbey Road brands.

“This is being built for the next 50 years. We have probably overspent in the short term, but we’re probably saving in the long term.”

He’s coy about how much this project has actually cost him, but he’ll freely admit it’s a lot.

“Oh, man. You couldn’t even guess. The over/under is $20 million. But it’s over. It’s over. I’m eating every Thursday and Saturday, but it’s OK,” says a laughing Wekerle, conceding that there have been moments when he worried that he was in way over his head. “I don’t think a day has gone by when I haven’t been stressed out about what’s the next issue here? ‘Oh, we hit a pipe? OK, we gotta do this differently.’ ‘Oh, this permit hasn’t come due? Well, we’ll have to hold off on the drywallers.’ It’s just been issue after issue. Maybe I would have changed my mind if I’d known how big a job it was at first.

“But it’s great for the city. I really believe in it. And thank you to anyone in the city who’s come up to me and said, ‘Thank you for bringing the El Mo back.’ It’s not me, it’s a whole team of people, but it really means a lot to me that people have reached out to say I’m doing something right. Yes, we could have done it cheaper. Yes, we could have opened it earlier. But it would have been lacklustre if we’d opened it earlier with just a touched-up facade, and it wouldn’t have had the kind of impact I think we’ll have.”

So when is the new El Mocambo going to open?

“I’ve been reluctant to say,” he sighs. “I keep saying ‘spring 2019.’ I’d like to have it open to do something during Canadian Music Week in May, but the date I’ve been giving is April 2. Maybe I should say April 1 because it gives me an out.”

READ THIS BEFORE YOU READ THAT.
GET OUR BOOKS NEWSLETTER TO YOUR INBOX.