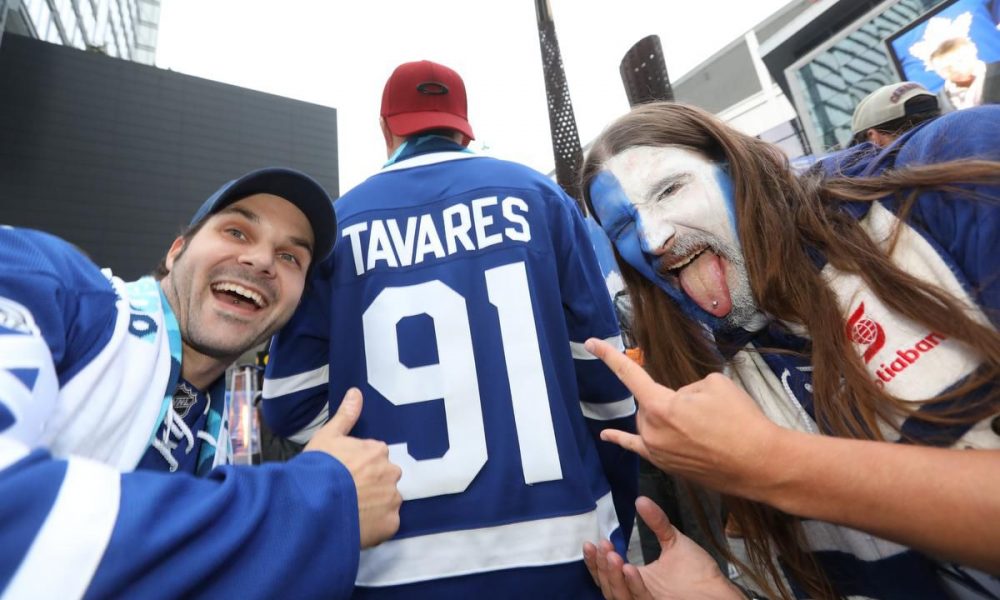 They’re not a park, a swale, a landmark or a historical monument.

They are, I suppose, a tree: The classic maple.

And now, because a bright 8-year-old boy initiated the petition, they’ve got a plaque.

Lift the velvet drape and there it was on Wednesday afternoon, hours before the curtain rose on the 2018-19 season, franchise Year 102 for the Toronto Maple Leafs, nee the Arenas, subsequently the St. Pats, Leafs since 1927.

MAILBAG: What should William Nylander do?

Beloved, iconic, hallowed; up there with the New York Yankees and Manchester United as a way of life, a heart’s desire, a troth, even in days of wretchedness.

Which these surely ain’t.

Thirteen Stanley Cup championships under their belts and not for half a century, arguably, as rosy blue a fingers-crossed destiny as now, starting with an up-and-over overtime goal by Auston Matthews Wednesday night, edging Montreal 3-2 despite not being the best team on the ice.

Fist bump to Evan Allenby, the kid (in the John Tavares jersey) who made the nomination with his dad Shawn (in the Auston Matthews jersey) to the Historic Sites and Monuments Board of Canada, via Parks Canada. Although it was kind of a weird sideways event, Parks Canada seizing a piece of the opening-night action.

“Over the last few years a lot of different people have had a lot of opportunities to ponder the Maple Leafs for their history, what they’ve done in the past,” said team president Brendan Shanahan. “We always say that we’ve very focused on the future, but we really embrace and cherish the past.”

Easy for Shanny to say. He never pulled on a shin pad for the Leafs all through those dark decades. He was off collecting rings in Detroit during the course of a hall-of-fame career. Until this Mimico boy finally came home to oversee a franchise transformation.

Maple Leaf Gardens may be a supermarket and the current rink now branded by a bank, but the Leafs are an enduring ethos, all glittery this season with Tavares, Matthews, Mitch Marner et al. A team to dream on under the stewardship of Mike Babcock, the general managing of Kyle Dubas, the uber-command of Shanahan, whose five-year Shanaplan is hurtling toward ultimate fruition.

“No, no, that was somebody else,” il presidente objected. “I never gave a number of years.”

The Raptors rouse, the Blue Jays dismay, but no team is so bred in the marrow of this city, this country, as the Leafs. So, along with that bronze plaque — not sure exactly where it will be placed — open up another can of 48th Highlanders and fasten your seatbelts.

“We’ve always been honest and truthful about where we were in any one part of our process,” noted Shanahan, and that’s no fib. “So I think our fans and our players have earned the right to be excited. I believe that they’ve earned the right to be in a position … to have the ability to now go all the way, compete for a Stanley Cup. Our fans recognize that, our players recognize that.

“I recognize what’s happening. We’ve been slowly building. For me, it’s always been about what’s next and what’s on the horizon. It’s always about getting to that next level. I’m really proud of the steps that have been taken, but we didn’t come here simply to be a team that’s a contender. Once you become a legitimate contender, it only gets harder.”

Fretfully, at the moment, with the distraction of no William Nylander in the lineup yet, still off doing the holdout bidding of his agent and perhaps his ex-NHLer dad. It’s not an impasse Nylander has any chance of winning. All the riches of Maple Leaf Sports and Entertainment can’t blunt the harsh realities of a salary-cap era, with the domino effects of this current loggerhead looming as reverberations for next summer’s contracts with other young studs.

Shanahan, once upon a time a font of quote-bites as a player, doesn’t show his face much anymore to media scruffs; he has stepped back, presidentially, allowing hot-shot executive Dubas to make the interview rounds, be the voice of record. He did step forward Wednesday, briefly, for the plaque commemoration press conference, fussing nicely over young Evan.

And making a few pointed remarks about the significance of being a Leaf, of wanting to be a Leaf, particularly at this hyper-expectant point in their history. Which clearly was a dog whistle aimed at Nylander and those — hey dad — who’ve orchestrated this standoff, the one sour note clanging off-key in the opening-night symphony.

“I had said, at the end of my first season, that we need players that want to be Maple Leafs. And this might not be for everyone. But I know a lot of people that have embraced it here, that have had success embracing what it means to be a Toronto Maple Leaf, to represent the city of Toronto. You have to want to be a Toronto Maple Leaf and we are lucky to have a lot of players that seem to really embrace that responsibility.”

Shanahan knew precisely how those comments would be interpreted, even as he reiterated his faith in Dubas’s ability to resolve the Nylander stalemate. The implication is that the Leafs, if necessary, can move on without Nylander or, if it comes to that, trade him, for all his to-drool-for talent. It did sound very much like Shanahan was intimating that a haircut might be required in the Nylander camp’s demands — Nylander is not, well, the second coming of Brendan Shanahan — and the need to understand, really understand, what he might be forsaking for a million here or there.

“I can speak from personal experience that when I get together with some of my old ’mates from the Cup years in Detroit, we talk about living together and growing together, that’s what we remember looking back. At the end of the day we all found a way to fit with each other so that we could keep adding to the group. That’s obviously what we are asking some of our young players to do.

“There’s a lot of other voices, understandably. Like I said, it’s not for everyone. We’re not for everybody. But we think the players that we currently have, while it’s not going to be easy, we have great confidence that they have bought into being a part of this program, being a part of the Toronto Maple Leafs and representing Toronto.

“I hope they can look back 20 years, 30 years down the road, that what’s going to be important to them is whether or not they maxed out as an individual and as a team and have championships to look back on.”

And one final nudge, a reminder of how good the game is to those who excel at it.