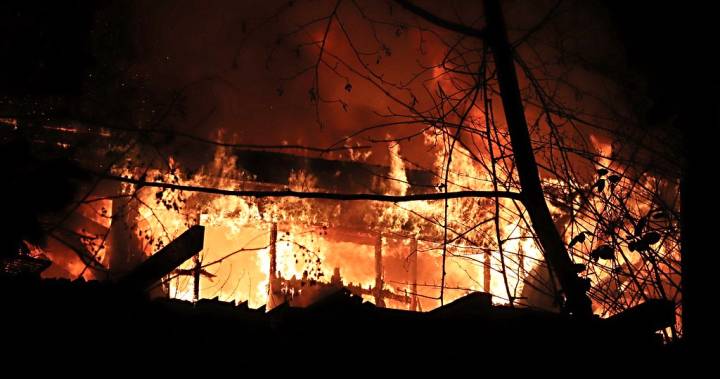 Fire crews have contained a fire at a commercial building at Aubrey Street and Pinehurst Drive in Burnaby, alarmingly close to the Kinder Morgan tank farm facility.

Burnaby Fire Deputy Chief Dave Samson assures local residents they are safe from danger, and there are no immediate concerns for those in the area. There are no reported injuries.

Samson tells Global News that crews were called out to 7742 Aubrey Street at 7:53 p.m. to a second alarm fire at a commercial structure – a large storage garage – situated about 400 feet away from the Kinder Morgan tank farm. A home nearby the structure was not damaged.

Samson says the main concern for firefighters was keeping the fire contained and from spreading to surrounding forest.

At the height of the blaze, there were 34 firefighters on scene and eleven trucks on hand to battle the blaze. Firefighters were challenged by difficult access to the site itself as well as water supply issues, due to low water pressure because of the the blaze’s location at the top of the mountain. Crews got around that challenge by creating a water supply structure to relay pump.

Assistant Fire Chief Barry Mawhinney tells Global the contents of the structure are not known for certain – possibly some chemicals – and a propane bottle is believed to have exploded as well. Firefighters limited their attack on the fire to the building’s exterior, due to the extreme heat and the danger of building collapse.

The bright orange flames, sparks and plumes of smoke could be seen for quite a distance, causing some justifiable alarm to nearby residents because of the proximity to the Kinder Morgan facility.

Fire officials say a long operation lays ahead putting out hot spots and cleaning up, as well as with the ensuing investigation. 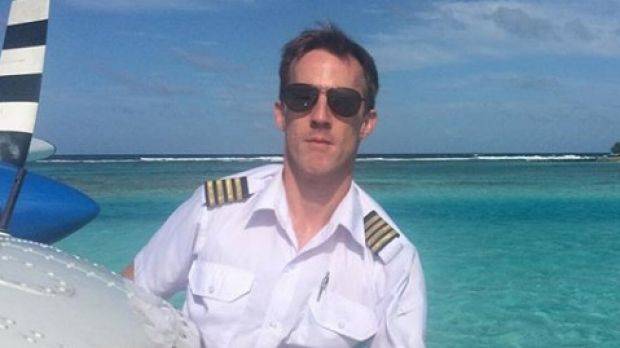 SYDNEY, Australia – Investigators in Australia have used photographs taken by a passenger and a witness on the ground to help piece together the last moments before a seaplane crashed on New Year’s Eve, killing the Canadian pilot and his five British passengers.

Pilot Gareth Morgan, a former resident of North Vancouver, was flying the de Havilland Canada DHC-2 Beaver owned by Sydney Seaplanes when it crashed into the Hawkesbury River near Sydney.

The bureau says its ongoing investigation will now focus on the plane’s flight path and how it compared to the standard departure typically taken by other pilots, the pilot’s health and medical history, the aircraft’s performance and handling characteristics, and similar accidents in Australia and internationally.

The interim report does not include any analysis or findings by the bureau.

A preliminary report released earlier this year ruled out a bird strike, contaminated fuel and the plane breaking up in flight as possibilities for the cause of the crash.