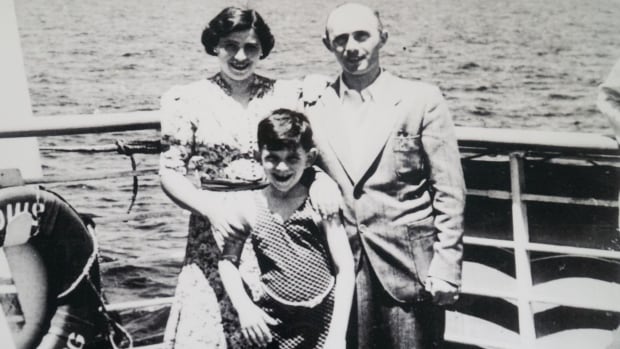 Sol Messinger doesn’t like to talk about his childhood, but he forces himself to because he thinks it’s important that people know what he survived.

Born in Germany in 1932, Messinger is the child of Polish immigrants who had moved to escape the growing anti-semitism and deteriorating economic situation in Poland. They had no way of knowing then that, like so many others before and during World War Two, they’d soon be running for their lives.

« Very early in my life I realized some people didn’t like us because we were Jewish, » Messinger says. « I used to play in the courtyard of our building when I was 3 or 4, until one time kids started beating me up and calling me a dirty Jew. »

As the situation worsened in Germany, Messinger and his family were among a group of 900 Jews who secured passage out of the country in 1939. Their ship, The MS St. Louis, was headed to Cuba.

Every passenger onboard had paid for visas to settle there, and many already had family waiting for them in Cuba. They made the two-week voyage safely, but despite doing everything right, they’d never set foot on the island. 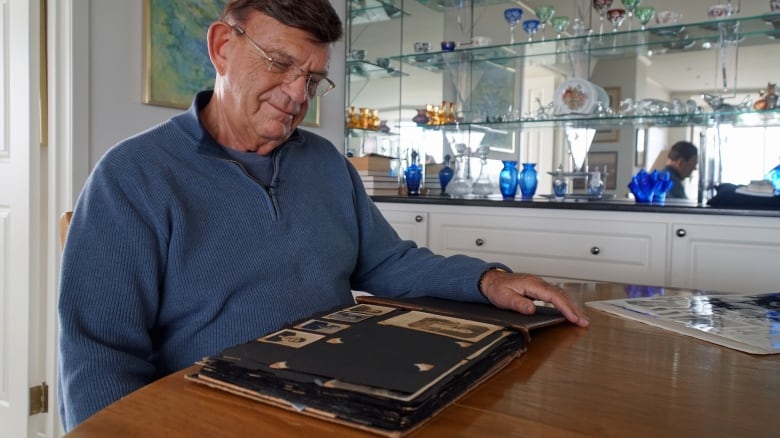 Sol Messinger, one of the Jewish refugees aboard the 1939 voyage of the MS St. Louis, looks at family photos at his home in Buffalo, N.Y., as he reflects on his family’s narrow escape from the Nazis during WWII. (Perlita Stroh/CBC)

« As they weighed the anchor in the harbour, we were immediately depressed and scared because we knew something wasn’t right — and we knew if we went back to Germany we’d have nothing to go back to, we’d be put in a camp. »

The ship’s captain tried to reassure his passengers, but after a few days of uncertainty he informed them that Cuba had reneged on its commitment to admit all but 29 of the refugees. Cuba revoked the visas of the rest of the passengers and refused to allow them to disembark.

Negotiations to settle the refugees elsewhere began immediately, but the United States refused to accept any passengers. And on Wednesday, Prime Minister Justin Trudeau will offer a formal apology in the House of Commons for Canada’s refusal to offer sanctuary.

Messinger will be in Ottawa to witness it first hand. Although he welcomes the Canadian apology, Messinger adds that it doesn’t erase any of the pain of what his family experienced.

« Emotionally, I can’t say it [the apology] does anything for what we went through, but intellectually I think it’s a good thing, » he says.

Sol Messinger reflects on the luck that helped him survive the holocaust, while looking at an iconic photo of a Jewish boy surrendering to Nazi officers in the Warsaw Ghetto. 1:01

« To be so close to safety and to be turned away, » says Messinger, « those events left a mark on me. To this day, travelling is very hard on me, I get very anxious … when I travel no one is chasing me to kill me, but you can’t get past those feelings. »

Messinger is one of the few remaining survivors of the MS St. Louis who is old enough to really remember the voyage.

« I had my 7th birthday on the ship, » says Messinger. « So I remember a lot, but I remember a lot from before then, too. I remember the night the Gestapo came for my father before we left Germany … you can imagine I was scared out of my mind. » 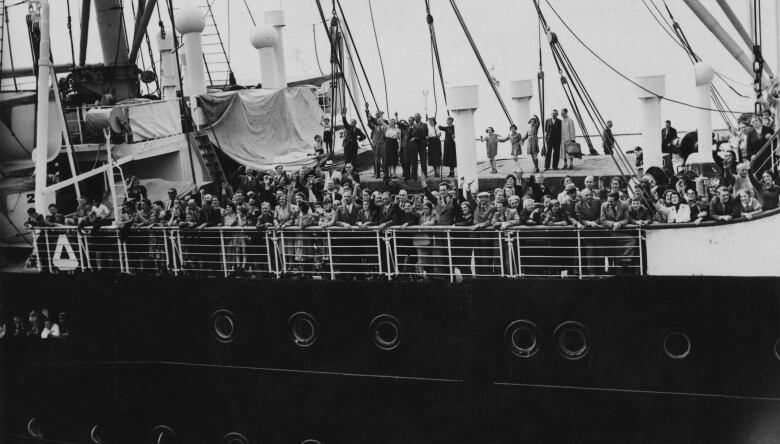 Refugees arrive in Antwerp on the MS St. Louis on June 17, 1939, after being denied entry to Cuba, the United States and Canada. (Hulton Archive/Getty Images)

​​Messinger was just six when his father was arrested in his home and deported back to his native Poland. He says the incident made his parents decide they had no choice but to try to leave Europe as soon as possible.

The task of arranging visas and passage was left solely to his mother, and Messinger says he has no idea how she did it. « You can imagine going to Nazi offices for a pretty Jewish woman was not an easy thing, but she did all of that. »

In fact, Messinger’s mother was able to secure visas for her family as well as passage on the MS St. Louis, but she refused to leave Germany without her husband.

« He wrote her a letter from Poland, » Messinger says. « He told her that if she didn’t go with me on that ship, whether he was back or not, she would have my blood on her hands — in those words. »

As fate would have it, Messinger’s father managed to slip back into Germany to get on the MS St. Louis with his family, and they departed together in 1939.

Messinger and his parents got so close to freedom that he even remembers spotting his extended family on a small boat near the ship as it anchored in the Havana harbour.

After the ship was refused entry and headed back to Europe, Messinger said the captain deliberately took his time getting back, sailing across the coast of Florida. He was sure that a country in the region would relent and accept a ship full of refugees headed back to a war zone.

Messinger’s family was sent to Belgium. They landed there in June of 1939 and immediately set out for France on foot.

« My father heard on the radio the Germans were 10 miles outside of Belgium, » he says. « We started walking to France hundreds of miles away, which was insane but we had no choice. » 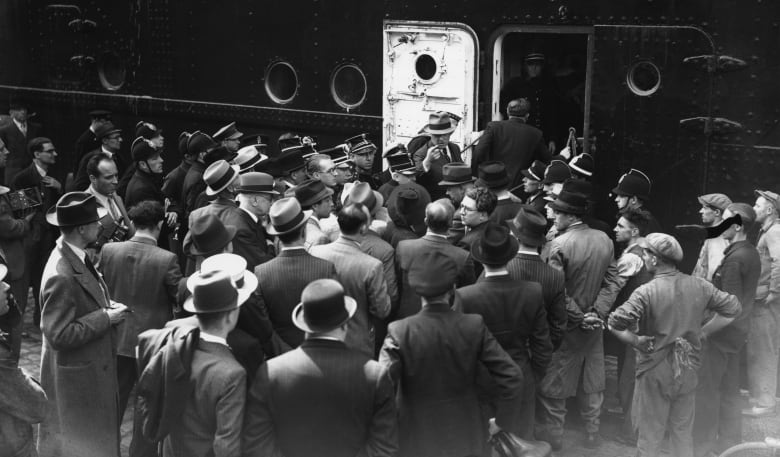 Police guard the gangway as officials board the German liner MS St. Louis on its arrival in Antwerp on June 17, 1939. The ship had been at sea for more than a month at that point, carrying 937 mainly German-Jewish refugees from Nazi persecution. (Gerry Cranham/Fox Photos/Getty Images)

The family made it as far as a little village in the Pyrenees, where they lived among its residents. The voyage was arduous and dangerous, and Messinger says those memories are still vivid in his mind.

« I remember we stopped a few times on the way, » he says. « My mother would lie on top of me as shots rang out around us, and there were German planes overhead. »

Although the family lived in relative safety for months in France, in October of 1940 they were arrested and sent to a detention camp.

​​Messinger and his mother were again separated from his father there. They slept in barracks on the ground without blankets, were infested with lice, and went hungry.

« For dinner we would have what they called a bowl of soup, » he explains. « It was water with some greasy spots. » 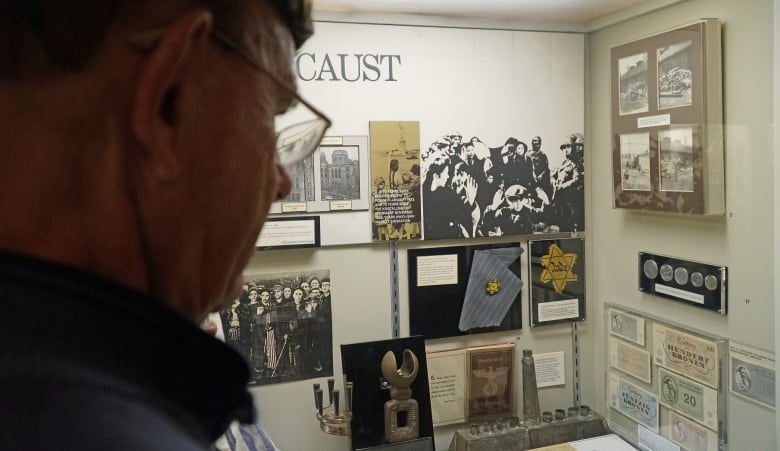 Messinger looks at a display of items connected to the WWII holocaust. He says they bring up difficult memories. (Perlita Stroh/CBC)

On Christmas Eve, Messinger and his mother escaped the camp. A few days later, his father did the same. Messinger says his parents took advantage of the guards getting drunk on the holidays and relaxing their watch.

The family returned to the French village they were in before, and resumed their efforts to secure a visa out of the country.

Since they were in a part of France that still had diplomatic relations with the U.S., they were eventually able to get visas and make their way to a ship in Portugal to set sail for New York.

« We got to New York on June 24, 1942, which I celebrate as my second birthday. For good reason, because I was really reborn that day, » he says. 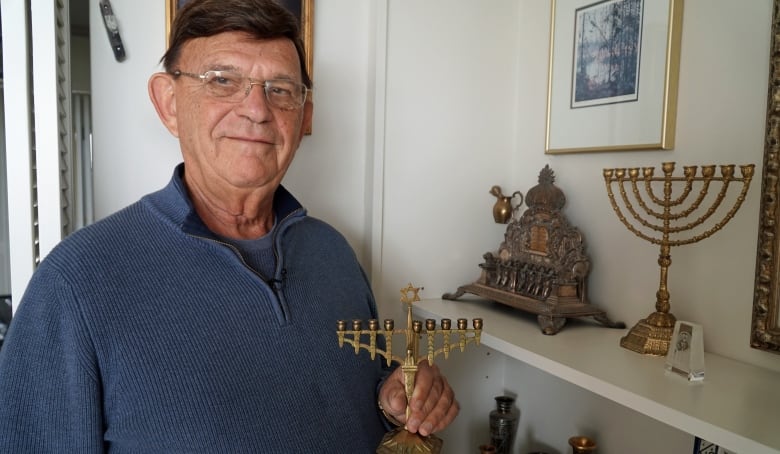 Messinger holds a menorah that his family took with them when they fled Berlin in 1939. They managed to hold on to it throughout their journey until they reached the U.S. in 1942. (Perlita Stroh/CBC)

​​Messinger and his family eventually settled in Buffalo, with members of their extended family, and he went on to enjoy a successful career as a pathologist.

Of the Jews who were turned away from Cuba on the MS St. Louis, 288 of the lucky ones were sent to England. Another 87 managed to leave Europe in 1940. Of those who didn’t find sanctuary, 278 survived the holocaust and 254 perished in concentration camps in Europe.

Messinger knows just how lucky he and his family were to survive.

« I feel very lucky I escaped — twice, » he says. « A friend of mine who lived in the French village near me, his family was picked up six weeks after we left and sent to Auschwitz. »