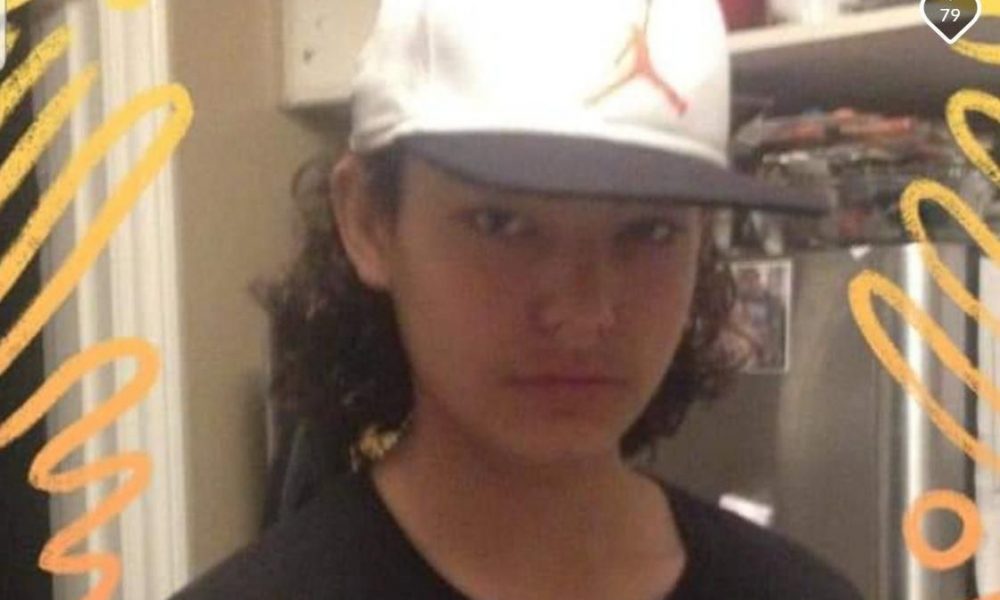 The 14-year-old’s dead body was found several hours later in Meadow Park, near Southdown Rd. and Truscott Dr., not far from his home Friday morning with obvious signs of trauma.

Three days after the brutal killing, the Driver-Martin family is struggling to pay for the child’s funeral, a family friend says.

“Riley’s body was found alone and cold early morning on December 7th,” Tierra Santa wrote in a GoFundMe post attempting to raise money for the family.

“All that knew Riley said he was a charming and polite young man with a heart of gold. His presence is greatly missed at the family table.”

Riley leaves his mom, younger brother and lots of friends and family who cared deeply for him, Santa added.

Mark Mahabir and his brother Nicholas Mahabir, both 20 and from Mississauga, have been charged with second degree murder. Police believe the homicide, the 25th in Peel this year, was an isolated incident.

“No one can be prepared for the loss of a family member, but even more so a child. Knowing you will never be able to see, speak to, hear from or hold your child again is unimaginable,” Santa wrote. “No amount of money can ease the pain this family is feeling, but any amount of monetary support would help to ease some of the financial stress.”

Meanwhile, the murder has shaken the Clarkson community. Driver-Martin was a Clarkson Secondary School student and councillors and staff were at the school Saturday morning for students and staff from Clarkson and Hillside Public School. The Peel District School Board has said classes will run as usual Monday, and support staff will be available for students and staff to speak to during the day.

There will be a memorial for Driver-Martin on Monday night at Clarkson Community Centre. 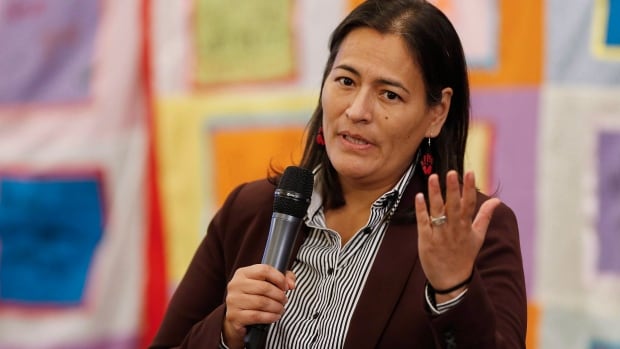 The national inquiry into missing and murdered Indigenous women and girls concludes its evidence gathering activities this week as final submissions from parties with standing will be heard in Ottawa.

Watch live here throughout each day.

The National Inquiry into Missing and Murdered Indigenous Women and Girls holds hearings in Ottawa December 10-14. 0:00

The inquiry granted official standing to approximately 100 parties, including persons or groups who demonstrated they had a substantial and direct interest in missing and murdered Indigenous women and girls, as well others with expertise and perspectives deemed essential for the inquiry to fulfil its mandate.

On Monday, the inquiry is expected to hear from representatives of the Congress of Aboriginal Peoples, Quebec Native Women, Native Women’s Association of Canada, and Pauktuutit Inuit Women of Canada.

Later in the week Amnesty International Canada, the Assembly of Manitoba Chiefs, Canadian Feminist Alliance for International Action and Partners Canada Without Poverty, Canadian Association of Chiefs of Police and other national and regional parties will address the commissioners.

The full schedule is available here.

Commissioners are expected to submit their final report to the federal government by April 30. 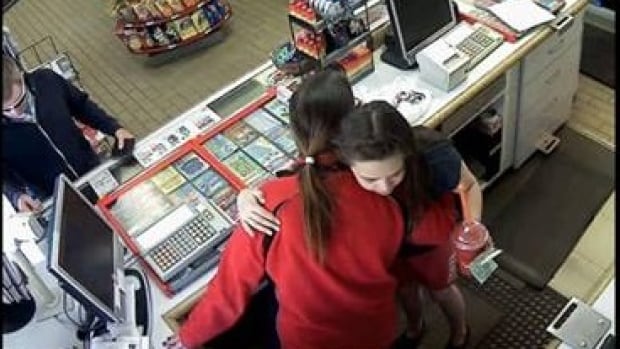 Misty Folkins has a copy of a surveillance tape that shows her mother’s final shift at an east Saint John gas station on June 26, 2015.

It shows her greeting customers, doing her weekend shopping and enjoying a visit from her three grandchildren.

Later that night, Bawn’s boyfriend shot and killed her. He took his own life three days later.

« I think that sometimes when you’re in that situation, there’s no piano music playing to warn you that things are going to go bad, » Folkins said.

Folkins wants people to talk about what happened to her mother and to learn from it.

But it’s not clear whether the Domestic Violence Death Review Committee — a provincial committee set up to do just that — has ever reviewed Bawn’s death.

The committee is supposed to help increase awareness around domestic violence and try to prevent similar deaths from happening in the future.

But Folkins said no one from the committee has ever interviewed her.

« There’s lots of details that wouldn’t be in a police report or wouldn’t necessarily be in a coroner’s report that are vital in understanding the whole picture and what happened to her and what happened leading up to it, » she said. 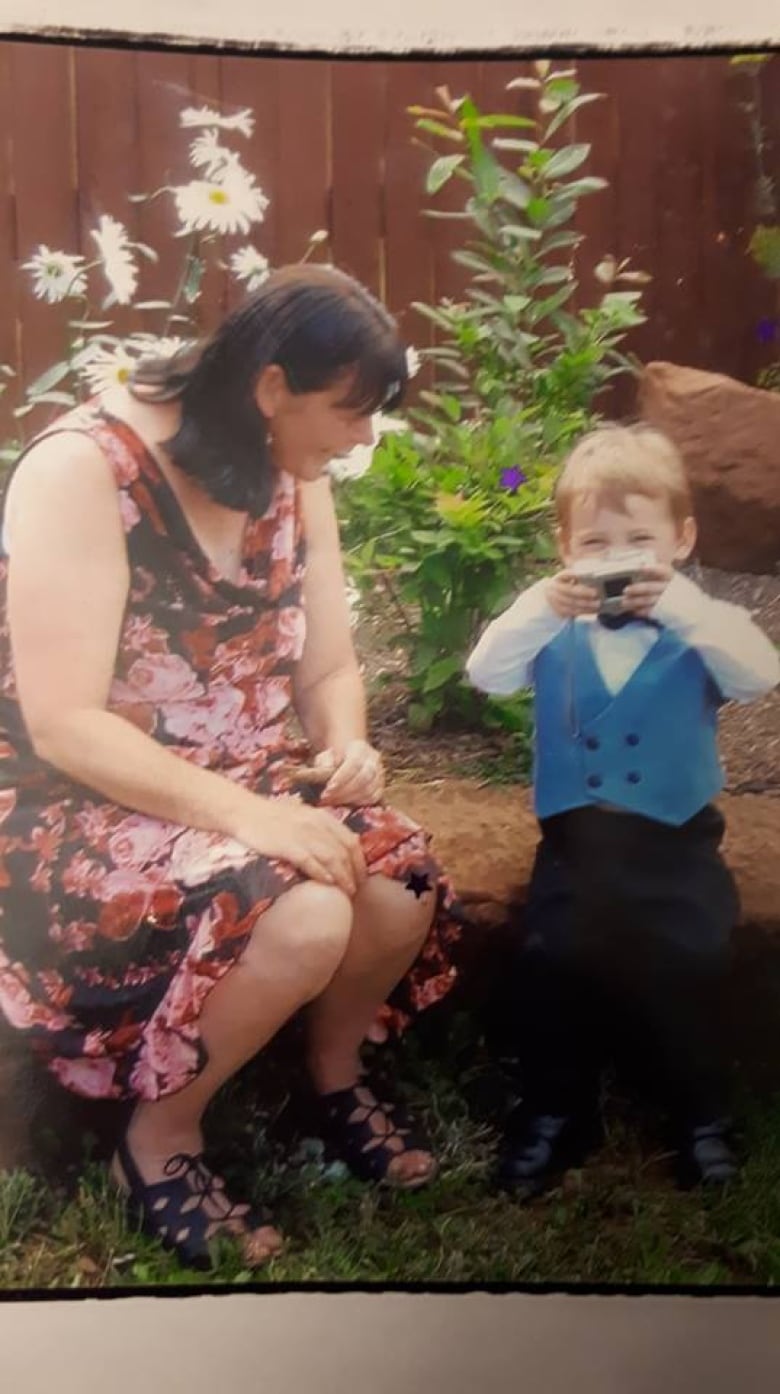 The committee has reviewed at least eight deaths since 2012.

But because the committee doesn’t reveal any details of the cases it reviews, even Folkins has no idea whether the committee looked at her mother’s death.

The committee only publicizes its recommendations and the response from government. The rest of its findings are private.

« You can’t change something if you don’t know why it’s happening or what the factors are, » Folkins said.

« I think kind of hiding that information makes it really hard to improve the situation. »

Bawn, 50, was familiar face at the Bayside Drive Petro-Canada station in Saint John for 15 years.

Her daughter said she loved getting to know her regular customers.

When she wasn’t working, Bawn loved to go camping and have a good time. Folkins has fond memories of camping trips with her parents, aunts and uncles as a child.

« We got kicked out of some of the best and worst campgrounds in New Brunswick. » 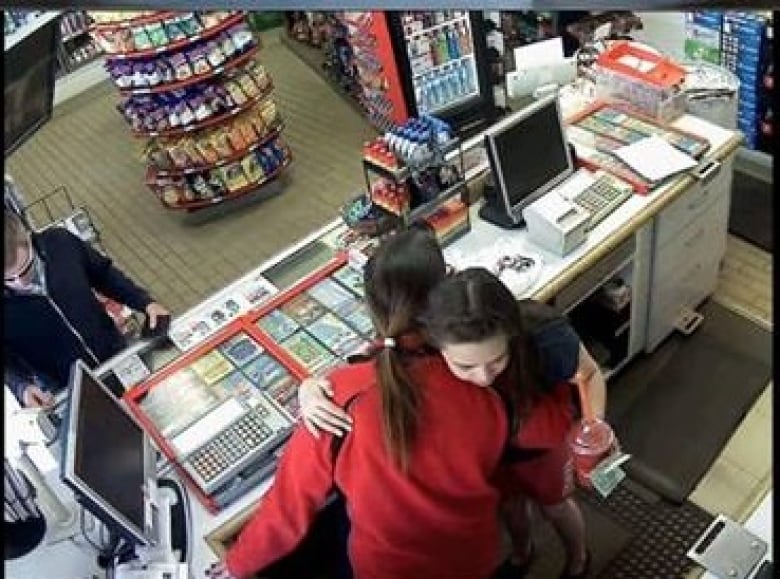 Cathy Bawn hugs her granddaughter in this surveillance camera footage from her final shift at a Saint John gas station. She died later that day. (Misty Folkins)

On her last day, surveillance camera footage shows Bawn hugging and holding her granddaughter’s face, happy to see her.

Bawn’s family didn’t know anything was wrong until Monday, three days after she’d been killed, when she failed to show up for work.

Folkins went to the Red Head Road home, where her mother lived, to investigate.

After discovering their dead cat outside — Folkins said her mother’s boyfriend killed the dog and the cat — Folkins went to a neighbour for help. They decided to call police.

When they arrived, officers entered the mobile home through the window.

That’s when Bawn’s boyfriend shot and killed himself, with Folkins and her then-14-month-old son standing outside the home. 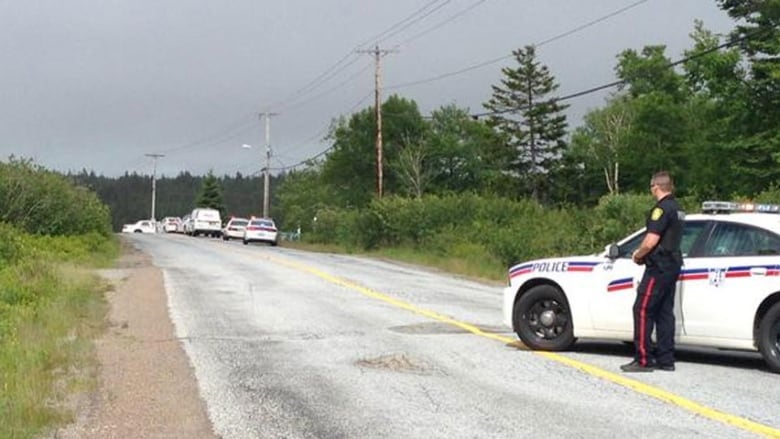 Saint John Police Force officers set up a barricade on Red Head Road, near the home where Cathy Bawn was killed, as they investigated. (Neville Crabbe/CBC)

Her mother’s death came as a shock. Nobody saw it coming, she said.

« Maybe if somebody said, ‘Hey, I noticed at that party that he was acting a little weird,’ maybe she might have spilled her guts and got some help. You never know, » Folkins said.

« But it’s just something that we don’t talk about. » 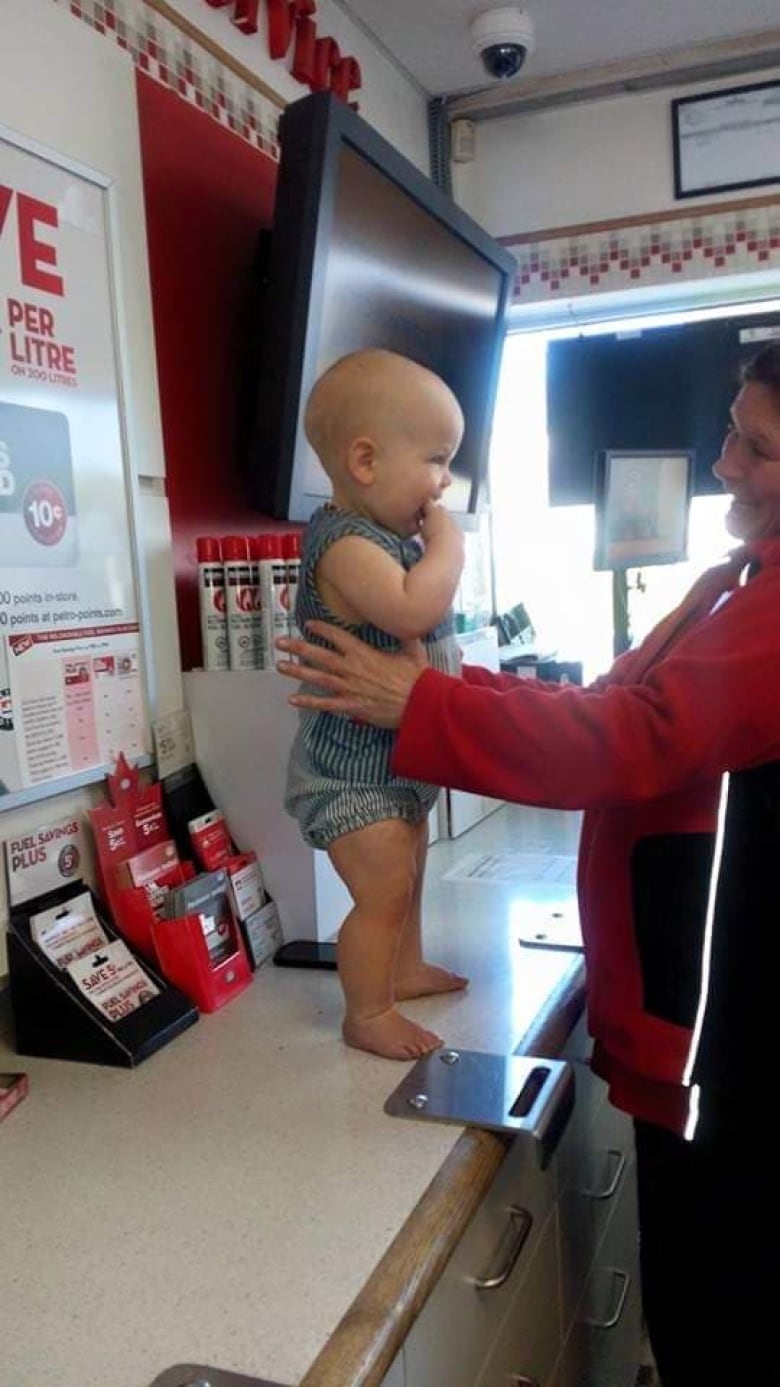 Cathy Bawn adored her three grandchildren. She is pictured here with her grandson, Milo. (Misty Folkins)

After losing an infant son due to a « faulty crib, » Folkins said her mother wanted to make sure everyone understood how to know if a crib was safe. She wanted people to learn from what happened to her family.

« She was very adamant about that so that his death wasn’t for nothing, » she said. « At least there would be some good to come of it. »

Folkins believes her mother would want the same thing for herself.

Rosella Melanson spent her career working on women’s issues. She has maintained her own list of women who have been killed by domestic violence over decades.

That includes women like Bawn, who have died in murder-suicides. Those, she said, are treated almost as « private crimes » in New Brunswick. Police often don’t release the names of the people who died or even say who killed who.

« It’s just case closed, on to the next one, » Melanson said. « No one is served by that, especially not the community. » 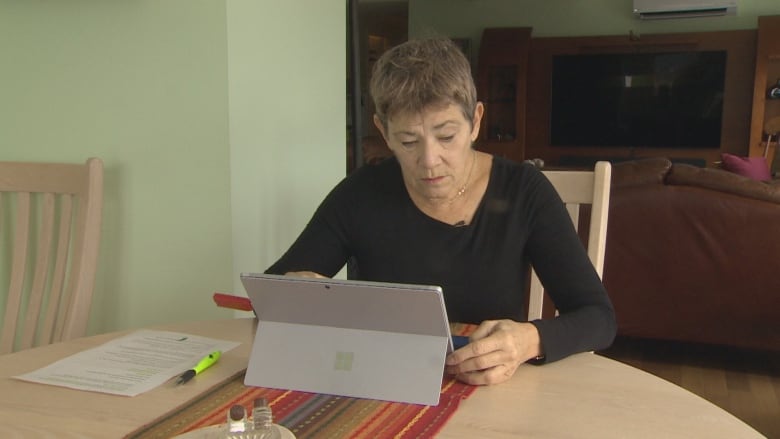 Rosella Melanson has kept her own list of women who have died from domestic violence over the decades. (Joe McDonald/CBC)

Although she has worked with government, even Melanson has trouble deciphering the recommendations made by the Domestic Violence Death Review Committee, which are written in « bureaucratic language. »

« It’s not like many people read those reports because they’re not made for the public. The review committee should be talking to the public. »

Chief coroner Gregory Forestell, who is responsible for overseeing the committee, declined an interview request.

Review will be made public

In an emailed statement, Forestell said he is reviewing the process of the committee including issues such as transparency and accountability.

The review is expected to be complete in late 2019 and will be made public. 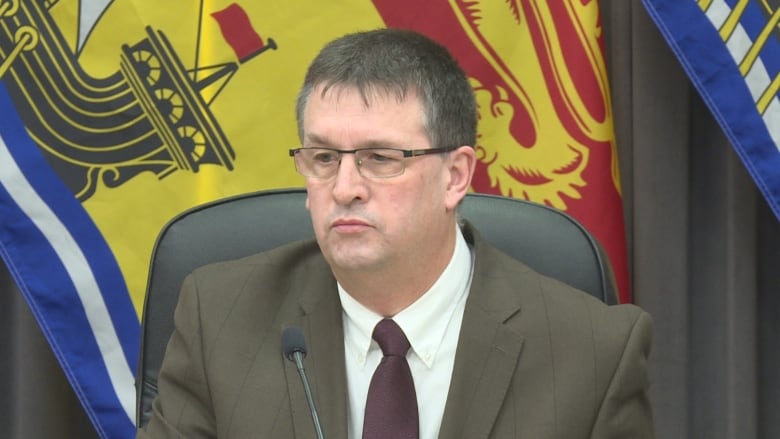 His office said the review was launched after Forestell did a similar review of the child death review committee last year.

As a result, that committee was revamped and the public is now allowed to know a little bit more about how vulnerable children die.

In the meantime, Folkins would like to see people talk about domestic violence more often.

She’s found that people sometimes get uncomfortable when the topic of her mother’s death comes up.

« People won’t ask you a question or they won’t mention her name, even, because they don’t want to bring it up, » she said. 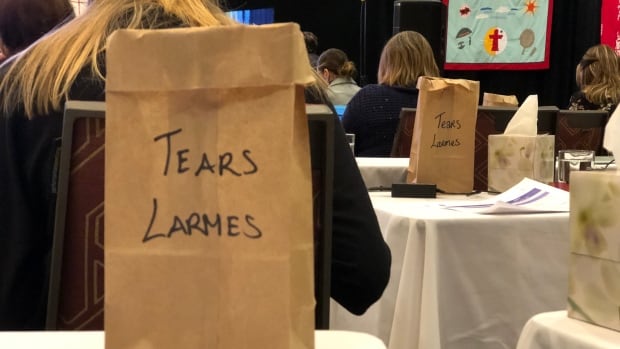 Canada’s inquiry into missing and murdered Indigenous women and girls is expected to focus attention Tuesday on the sex trade.

Among those scheduled to address the inquiry is Jennisha Wilson, who has studied how Indigenous women can exit the sex trade. She works in Ottawa with Tungasuvvingat Inuit, a non-profit group that focuses on Inuit living in Canada’s cities.

Also scheduled to testify is Yellowknife-based Pertice Moffit, who manages health research programs in the Northwest Territories. She specializes in women’s and Indigenous health research.

A third speaker is Mealia Sheutiapik, a former resident of Iqaluit who works with the Anglican Church in Ottawa. A biographical sketch provided by inquiry says Sheutiapik « was immersed in the sexual trade in Ottawa for numerous years. »

The inquiry launched its third phase on Monday at the Sheraton Hotel in St. John’s.

The inquiry’s earlier phases focused first on families and survivors, and then on institutions.

In the third phase, it will collect evidence experts and officials, including those from government, law, academia and the community.

CBC News will carry a live video stream of the inquiry’s testimony.

Sexual exploitation, human trafficking and sexual violence are set to be explored as the National Inquiry into Missing and Murdered Indigenous Women and Girls begins four days of a hearings in St. John’s on Monday.

Nine people will testify at the hearing, which is open to the public, at the Sheraton Hotel.

Insp. Tina Chalk of the Ontario Provincial Police will be the first to testify during MMWIG hearings in St. John’s this week. (Tina Chalk/OPP)

First to take the stand is Tina Chalk, a veteran of the Ontario Provincial Police force who has been a lead investigator in many sexual assault, missing persons and human trafficking cases.

The inquiry involves three parts. The first focuses on hearing from families and survivors, and the second on institutions. The St. John’s hearing is part of its third effort, to gather testimony from experts and officials, including those from government, law, academia and the community.